The relevance of 2 degrees

On 18 April, the Dutch polar explorer and climate journalist Bernice Notenboom, together with fellow 2 Degrees expeditioners Martin Hartley and Ann Daniels, achieved their target of reaching the geographic North Pole by foot. The goal of the expedition, which kicked off with ESA and stakeholders on 2 February 2017 at the Space Expo, Noordwijk in the Netherlands, was to walk 2 degrees from 88°N to the North Pole – to reinforce the importance of commitment to Action on the 2° Paris Climate Agreement. 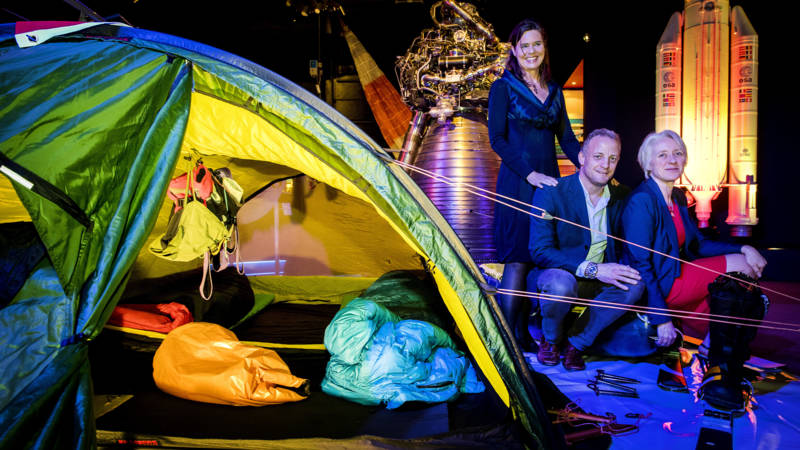 Along their route, the expeditioners had to negotiate tricky conditions with drifting pack ice and extremely thin ice, whilst supporting important climate research with scientific measurements of the snow layer on top of the sea ice.

At the expedition kick off on 2 February 2017, and our planning meetings at ESA’s ESTEC establishment in January and in Banff, Canada (at the CryoSat Science Meeting, I was careful to highlight the risks posed as a consequence of the climate trend towards thinner Arctic ice, coupled with recent observations of extremely anomalous warm winter weather.

It was at our meeting in January that I painfully recounted the fate of expeditioners Marc Cornelissen and Philip de Roo, who had also collaborated closely with ESA. Marc had become a close friend, organising ESA CryoVEx Arctic field camp logistics.

Both Marc and Philip tragically lost their lives when negotiating thin ice on an expedition near Bathurst Island, Nunavut, Canada in April 2015.

The key concerns identified along the 2 Degrees expedition route were based on observations from ESA’s CryoSat satellite of relatively young, thin first year ice in the central Arctic, as well as the potential for open fractures and leads due to ice drift in response to polar storms. 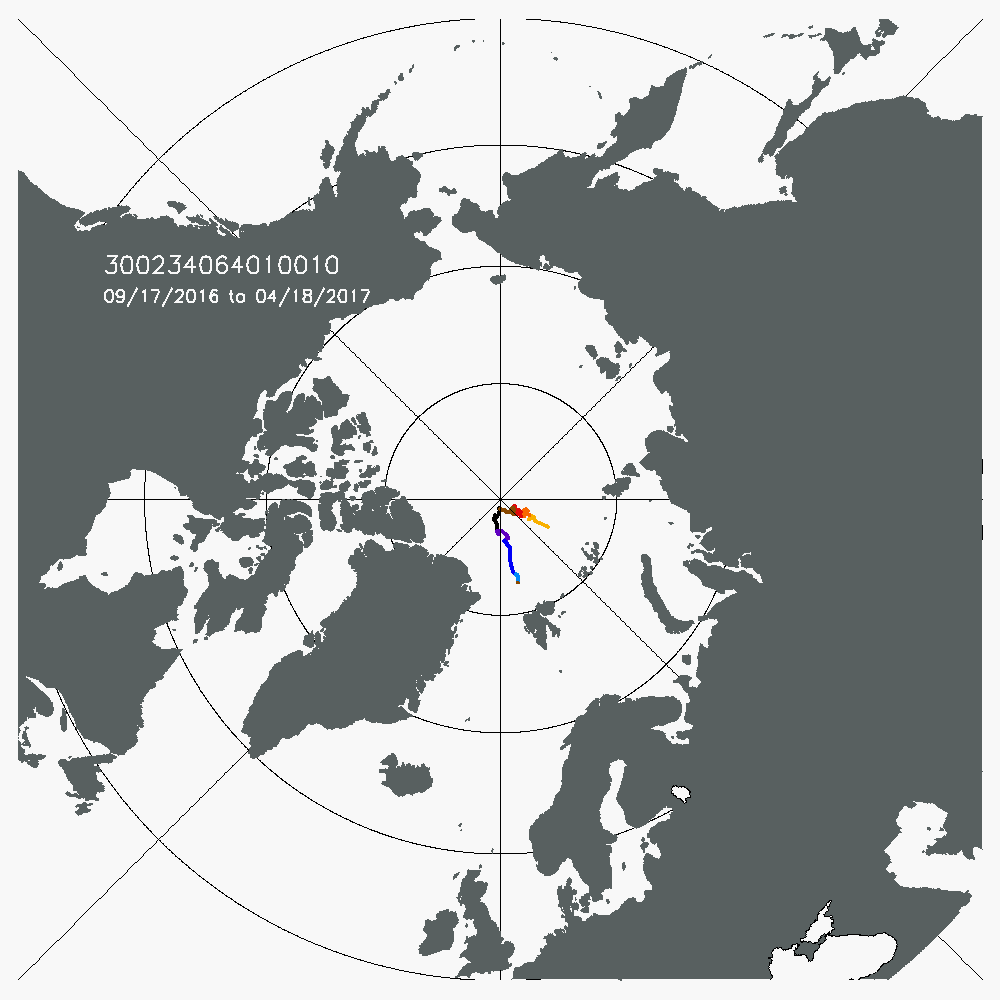 Throughout the trek I had regular exchanges with 2 Degrees base camp manager Hen-Jan Geel, to provide ice forecast information from the Copernicus Marine Environment Monitoring Service, interpretation of Sentinel-1 synthetic aperture radar derived regional sea-ice drift (courtesy of Roberto Saldo at DTU Space and of synoptic, Arctic-wide drift from a combination of MetOp and other sensors). 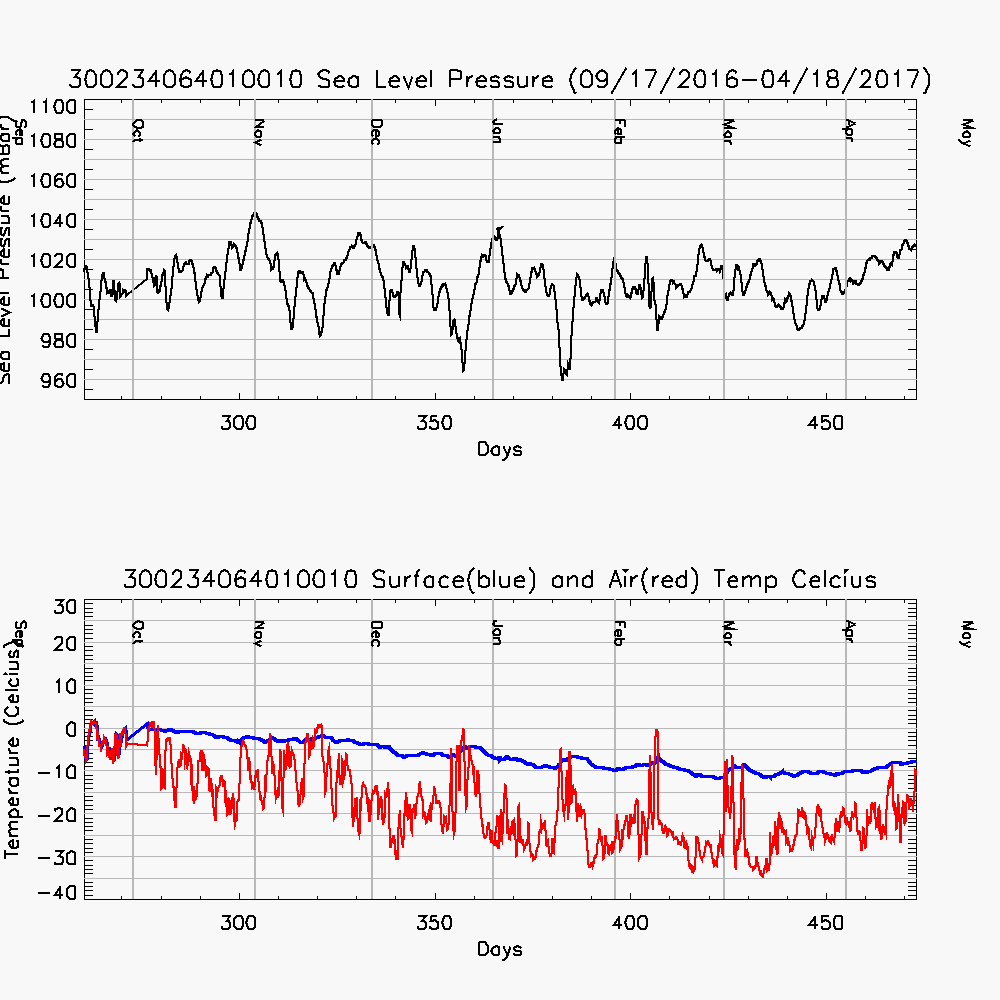 These data were combined with other data from drifting weather buoys and weather forecasts to give the 2 Degrees team daily information on how to adjust their trajectory to compensate for the ice drift and conditions along their route.

Bernice, Martin and Ann had left on 5 April with heavily laden sledges from their drop off point at 88° N, 150°E to ski to the North Pole. Though the ice was extremely thin, the conditions were favourable with average temperatures of around –21°C resulting in ice fractures (known as leads) becoming quickly frozen. Thanks to mainly level first-year  sea ice and a relatively little ridged and rubbled ice terrain, the team made good progress and arrived ahead of schedule. 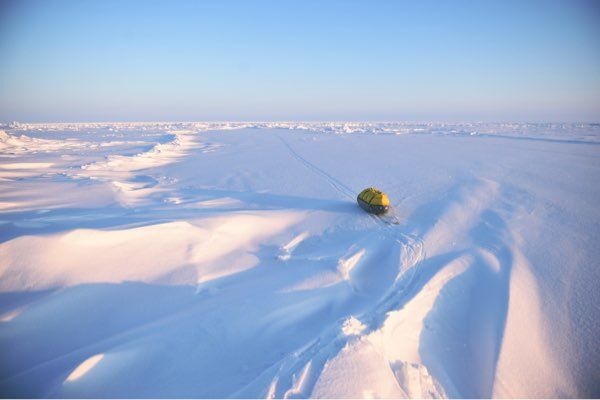 Yesterday evening Bernice called me excitedly on her Iridium satellite telephone after making camp upon arrival at the North Pole. “There is no signpost here, and there is no moment of recognition. You can only look up your latitude by GPS positioning and know that you reached the centre of the Arctic,” she said.

Bernice expressed concern about the state of the Arctic ice by comparison to previous expeditions. “Much old ice is gone. We see mainly seasonal, first-year ice. There is more snow that insulates and slows the growth of the ice.”

Lead or fracture in the sea ice, quickly freezing over because of cold air temperatures below –20°C. (2 Degrees)

During their trek, the team supported ESA’s CryoVEx campaign by making snow measurements. They made around 1250 measurements of snow depth to help validate CryoSat’s measurements. These snow data will help better understand the uncertainty in CryoSat satellite ice-thickness measurements which can result from variations snow on the surface of the sea ice. Such information is critical, both to improve our understanding how snow affects sea ice growth and the importance of Arctic sea-ice thickness and total volume from a climate perspective.

While the team wait to be picked up, they are continuing to make snow-depth surveys.

Bernice and her colleagues have also rolled out their banner of support for the March for Science on Earth Day to draw attention the call to policy makers of the need to enact evidence-based policies in the public interest.

Typical three-man tent and camp set up along the route. (2 Degrees)

It’s not only about scientists and politicians, but rather about the very real role that science plays in each of our lives and the need to respect and encourage the fact that basic research is what gives us insight into the world around us. 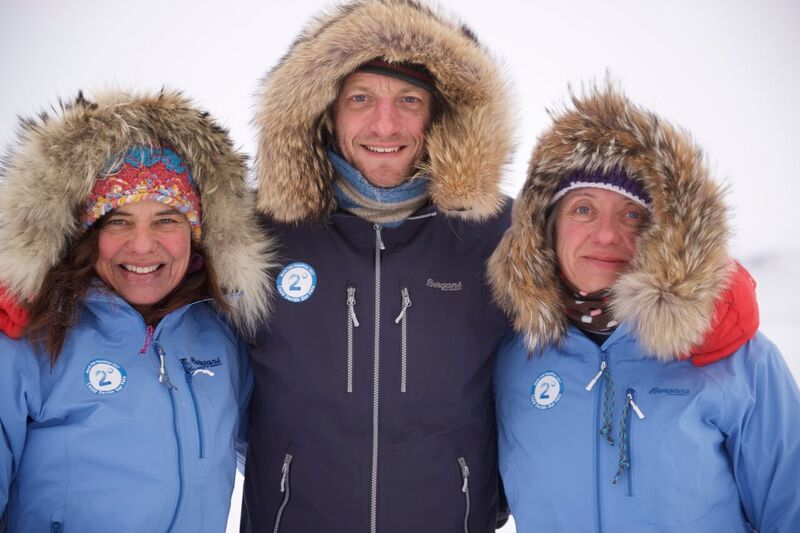 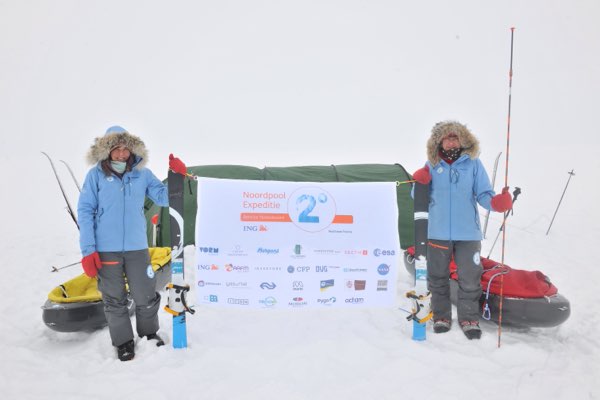 At the North Pole. (2 Degrees)

There are worrying signs from interpretation of the routine observations of the Arctic being made by ESA satellites such as CryoSat and Sentinel-1.

Based upon their first-hand ‘boots on ice’ experience, the message from the 2 Degrees team is to respect these scientific facts and figures coming from Arctic climate science, and to act accordingly to achieve the 2° goal.

Read more about the CryoVEx campaign: To the Arctic for CryoSat and beyond