Cryovex and Karen: Catching Up

Airborne surveys in the Arctic always rely on good weather so delays have to be expected. Often there are a few bad weather days in a row but if one is really unfortunate, there can be almost a week without any flying activity. This happened to at the beginning of our Polar Airborne Measurements and Arctic Regional Climate Model Simulation Project campaign. The project was initiated by the Alfred Wegener Institute (AWI) in Germany and the science team consists of members from AWI and from the Johannes Gutenberg University Mainz. 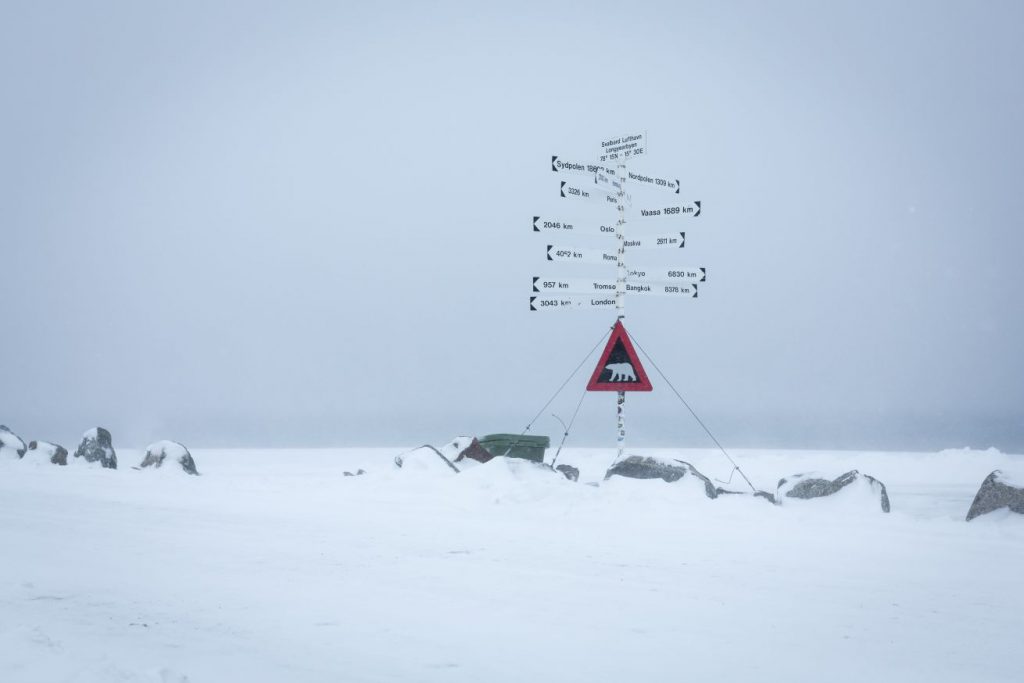 Low clouds and fog prevent the arrival of Polar-5 at the airport in Longyearbyen, Spitsbergen. (S. Hendricks–AWI).

Half of team travelled to Longyearbyen by airline and the other half travelled with our aircraft to Tromsø, making atmospheric measurements on the transfer from Bremen, Germany. However, the aircraft could not travel further due to the weather and all we could do was to wait until the weather improved in the Barents Sea region. 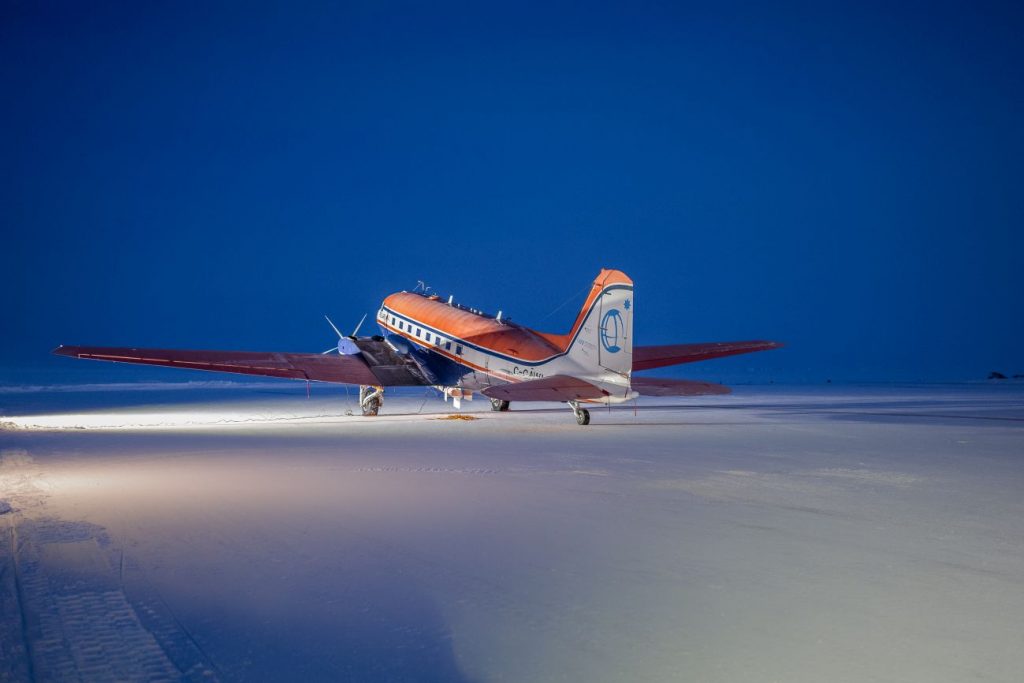 There is still a trace of polar night in the last week in March at Station Nord in Greenland, where Polar-5 is parked for the night. (S. Hendricks–AWI).

Our scientific workhorse is Polar-5, a converted DC-3 equipped with various sensors for sea ice and atmospheric research. Our contribution to the CryoVEx project is the EM-Bird, a towed sensor that directly measures snow plus sea ice thickness. In addition, we carry an airborne laser scanner and a snow depth radar. With this suite of sensors we want to measures sea-ice thickness, freeboard and snow depth from the same aircraft between Spitsbergen and Alaska. With this combination of measurements we hope to improve the CryoSat freeboard retrievals and their conversion to sea-ice thickness. 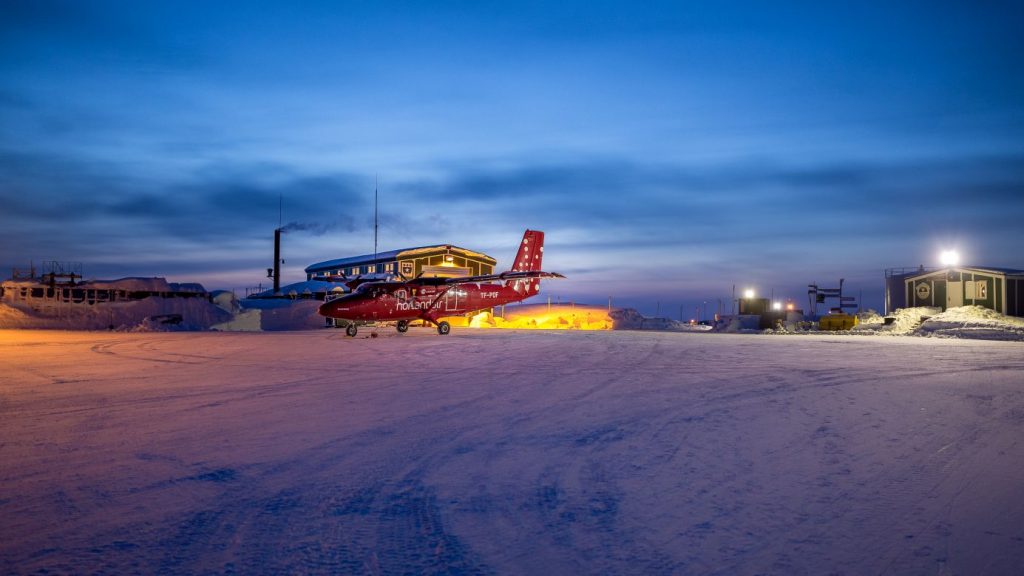 First meeting with our colleagues from ESA and DTU at Station Nord, where the Twin Otter parks at the other end of the airport. (S. Hendricks–AWI).

After a long week of waiting, Polar-5 finally arrived in Longyearbyen, Spitsbergen. We hurried and installed the EM-Bird under the aircraft’s belly. The weather cooperated on the next day and we could finally catch up with our colleagues from ESA and DTU at Station Nord in Greenland. After separate sea-ice science flights over the Fram Strait region, both aircraft flew to CFS Alert, the main site of the CryoVEX sea ice project. 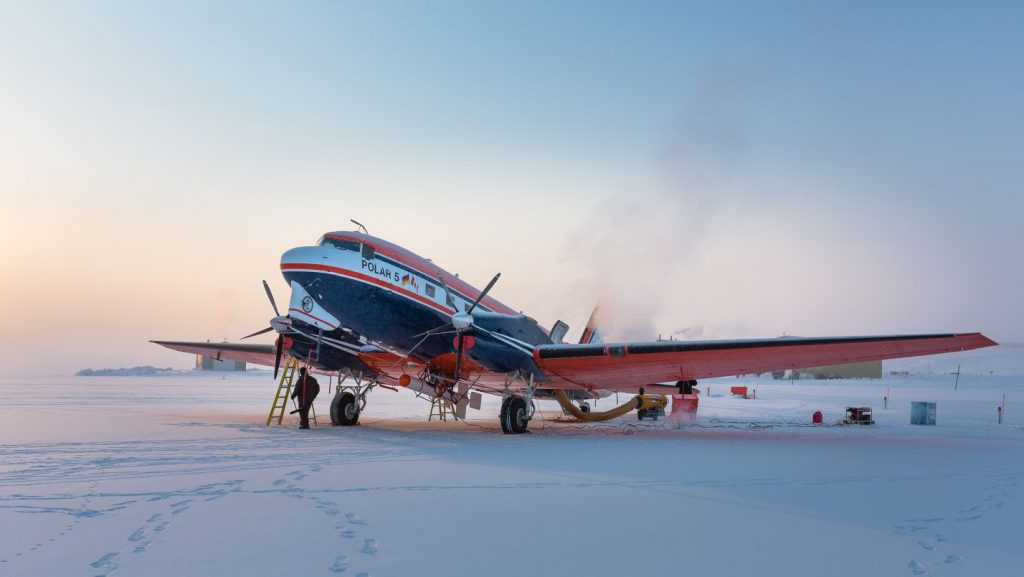 Polar-5 and its sensors need to be heated before a survey flight. It is below -30°C at CFS Alert, the location of the first coordinated flight with Polar-5 and the ESA/DTU Twin Otter Team. (S. Hendricks–AWI).

Again we had to wait for the weather to cooperate, but the wait was worth it. One day later, both aircraft plus one from NASA’s Operation IceBridge surveyed a CryoSat groundtrack at the same time. With all the complementing measurements from the different sensors on each aircraft, we have a unique dataset to work on in the coming month and to improve thickness information of Arctic sea ice. 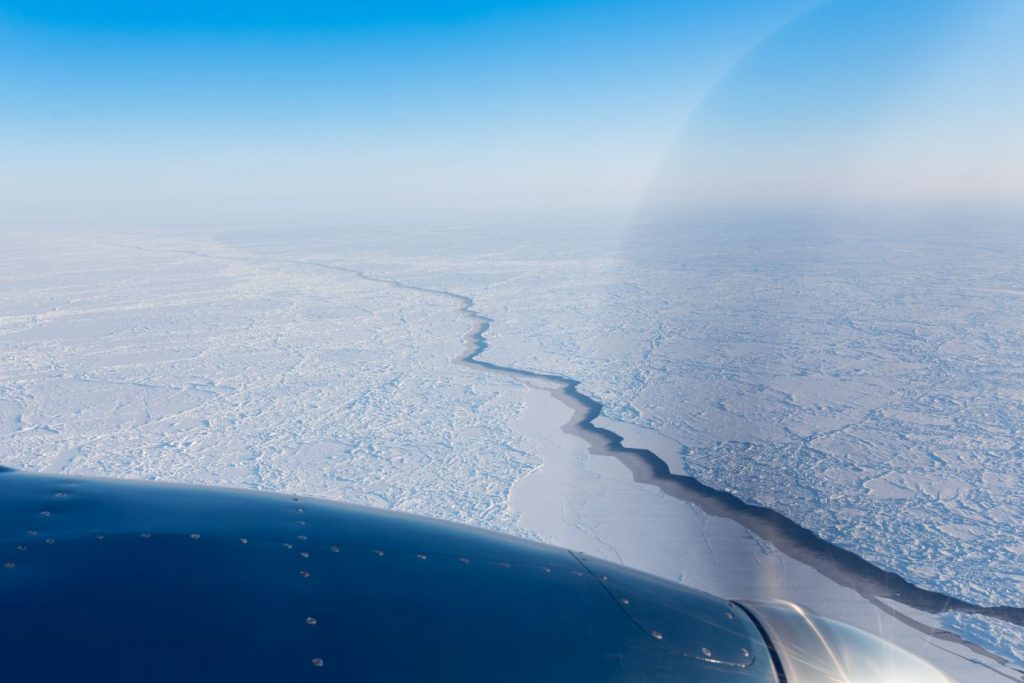 Leads in sea ice are not only a window to the ocean, there are also crucial to measure freeboard by airborne and satellite sensors. This particular lead seen from Polar-5 was overflown by all aircraft on the CryoVEx line. (S. Hendricks–AWI).

While our ESA colleagues are heading south from where we are right now, the PAMARCMIP team will travel further west until we reach our destination Utqiaqvik (Barrow) in Alaska. We hope for several more science flights with a variety of sea ice conditions that will help us to better understand the regional aspects of sea ice thickness retrieval by CryoSat. 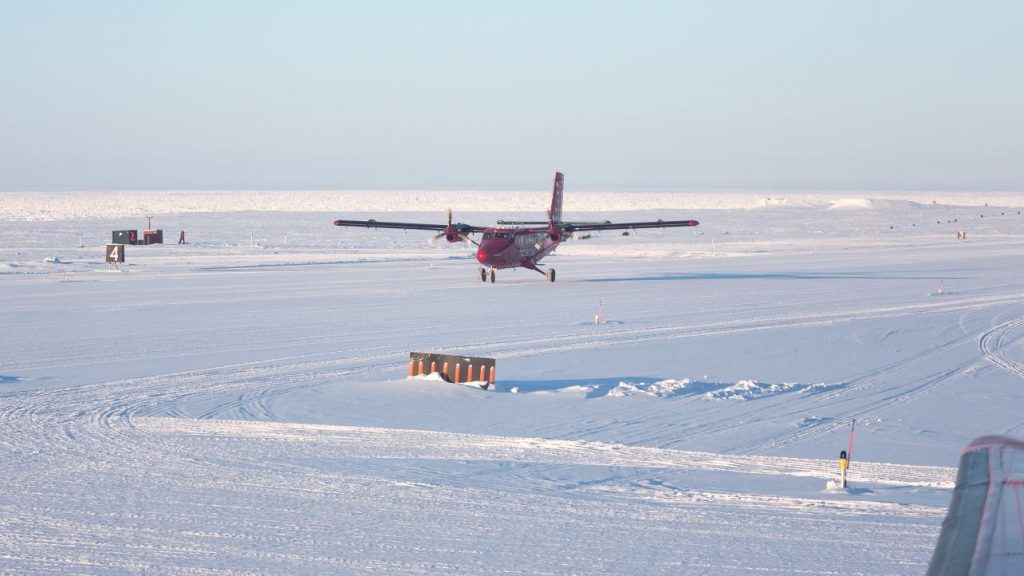 Our colleagues in the Twin Otter landed just after Polar-5 at the airport of CFS Alert in Canada. Photo taken through a window of Polar-5. (S. Hendricks–AWI).