Cryovex: Mowing the lawn in the Arctic

Today – Saturday 29 March had been seen as the most challenging day. We had prayed to the polar weather gods to bless us with good conditions for a survey of the sea ice in the region of the CryoVEx ice camp. The violent storm which had torn across the Arctic and northern region of Greenland on Thursday had simultaneously snowed in the camp team at Station Nord, grounded all flights in Thule AFB, and had also forced our own no-flight day in Canadian Forces Station Alert.

Fortunately, more stable weather had followed on Friday afternoon, allowing the ski-equipped KBAL Twin Otter supply aircraft to transport equipment and a small ice camp team of three to land on the sea ice to the north of Cape Morris Jesup, Greenland at 84°N, 40°W. The camp deployment team comprised Dutch polar explorer and camp logistics chief Marc Cornelissen, and Petter Nyquist an experienced Norwegian expeditionist. Both have served hard time at both poles, each having completed several previous ski expeditions across the Arctic sea ice. They were joined by the ice camp science team leader Christian Haas, of York University, Toronto, Canada – also a veteran of many previous polar sea ice campaigns and a colleague of mine on a previous ice-breaker expedition to Antarctica. All three are entrusted with providing a safe camp, and polar-bear free environment for the enlarged team that arrive the following morning. 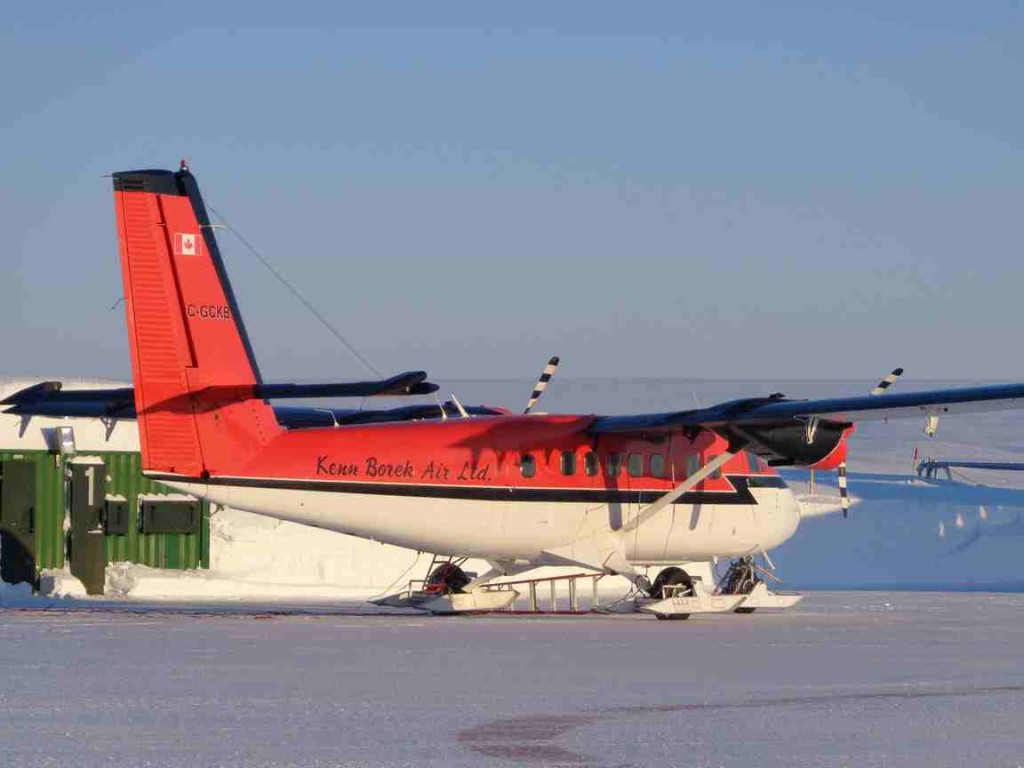 The critical task upon finding a safe camp location and stable landing site was to put out two GPS buoys on the ice at the camp – to register the location of the piece of pack ice (known as an ice floe). The storm’s vigour had fractured the ice into distinct pieces, separated by huge expanses of open leads with recently grown ‘nilas’ ice, and the dilation of the ice pack had excited the ice drift to speeds of over 3 km/day (hundreds of metres per hour).

Worrying amounts of large leads (or fractures) in the pack ice. This one was probably opened by Thursday’s violent storm. (Courtesy Mark Drinkwater, ESA)

Global Positioning System (GPS) geographic fixes retransmitted via Iridium satellite signals provide a critical lifeline whilst adrift in the middle of the Arctic Ocean.  Beacons or GPS buoys are the only way an aircraft can find the way to the CryoVEx Camp to be able recover the CryoVEx camp team. Meanwhile, a pair of these buoys had to be placed roughly 2 km apart, at each end of a survey line marked by ski poles and orange markers. The latitude and longitude positions of these key reference points serve another vital function, giving key information on the rotation of the ice floe and enabling our instrumented aircraft to align flight survey tracks with the camp survey line, or for the approach to the landing strip or skiway. Black markers placed out on the sea ice along the edges of the skiway, adjacent to the camp gave the pilot a visual means to identify the safe landing site, and to avoid landing on the survey area.

Whilst all the hard work was going on at the camp, we the scientific and flight crews of TF-POF Twin Otter and Basler were fortunate to have been offered an extra day’s stay in CFS Alert by the commanding officer of the base as a consequence of Thursday’s weather delay. The fact we were still on Eastern Canadian time helped in that it gave the team in Station Nord (who were on Greenwich or Universal time) a four-hour lead to fly the remaining six scientists from Station Nord out to the ice camp on Saturday morning, before  we arrived overhead to perform the airborne instrument survey. 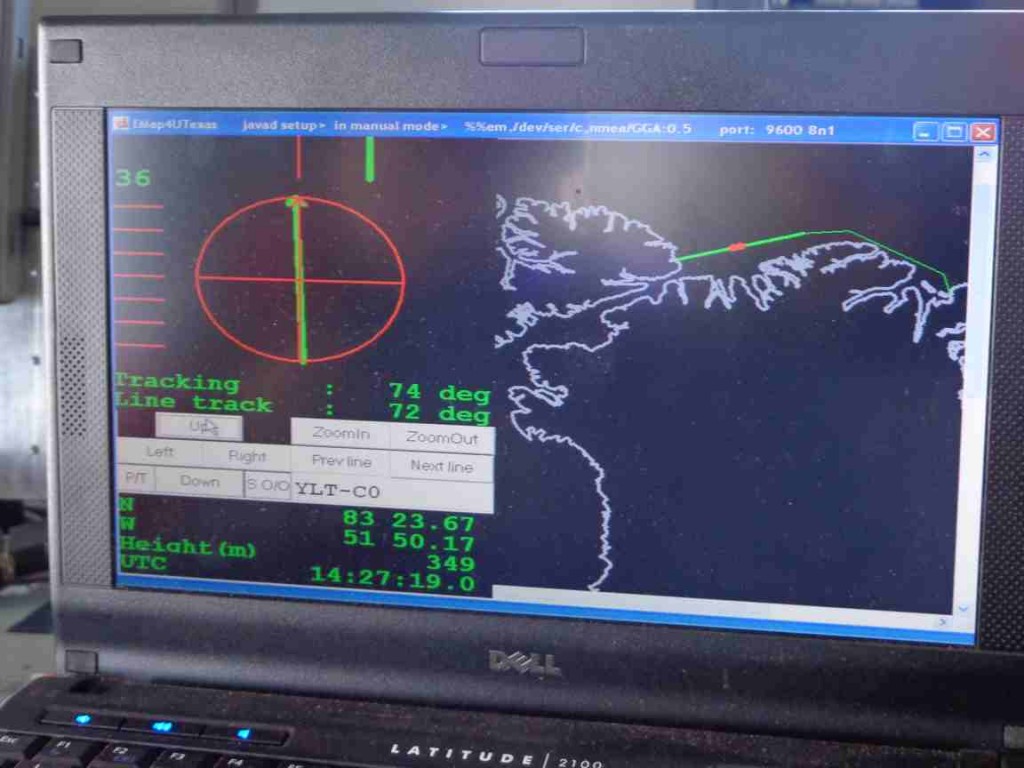 Just before take-off I take the last chance of a computer network connection to download the latest fix on the camp location and survey line. Fortunately, it showed only a few hundred metres movement since breakfast. Once airborne we are unable to download the locations, and forecast the distance the ice will drift in the 2 hours’ time it takes for us to fly from Alert to the camp. We add the waypoint in the flight planning computer for the ASIRAS and swath lidar, which is connected to the autopilot system, and once airborne we fly by wire into the frozen wilderness. 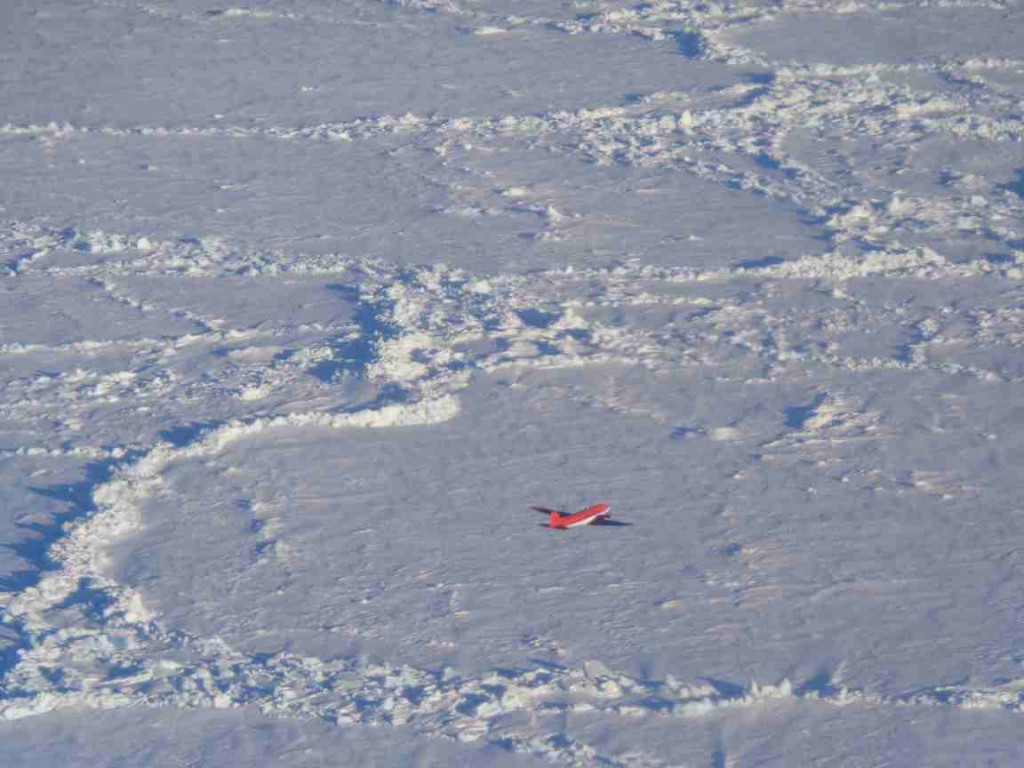 When we arrived at the ice camp, our pilots first overflew the 2 hour old camp location to assess where our colleagues might be on the ground. After a rapid scan of the area we caught a glimpse of the tiny speck of a tent village floating in the sea of white. I could pick out ski trails from the Twin Otter landing, and the triplet of perfectly parallel ski tracks snaked their way across the ice, leading my eye to the camp location. The pilots had reacted more quickly in the cockpit with their forward view, and recorded an waypoint in the GPS. They made a quick turn to the right and then a wide-banked turn to line up the aircraft with the 2 km survey line. The ends of which were marked by a stippled line made from XXL orange trash bags filled with ice and snow and the GPS buoys.

Our fuel was limited by the continuation of our transfer to Station Nord, Greenland, offering only 1 hour to map the area of sea ice around the camp. So we set to work ‘

mowing the lawn’ together with the Basler aircraft . You may ask exactly what we were doing cutting grass at 84°N in the middle of winter? But mowing the lawn is just an expression used to describe the series of parallel flight lines separated by banked turns. Before we knew it, our close encounter with our colleagues was over, and the computer screen showed how efficient our airborne lawn mower had been in criss-crossing the camp. With a quick wing-wag we signalled good-bye to our intrepid campers and headed towards our new flight base at Station Nord, the northernmost inhabited camp in Greenland. 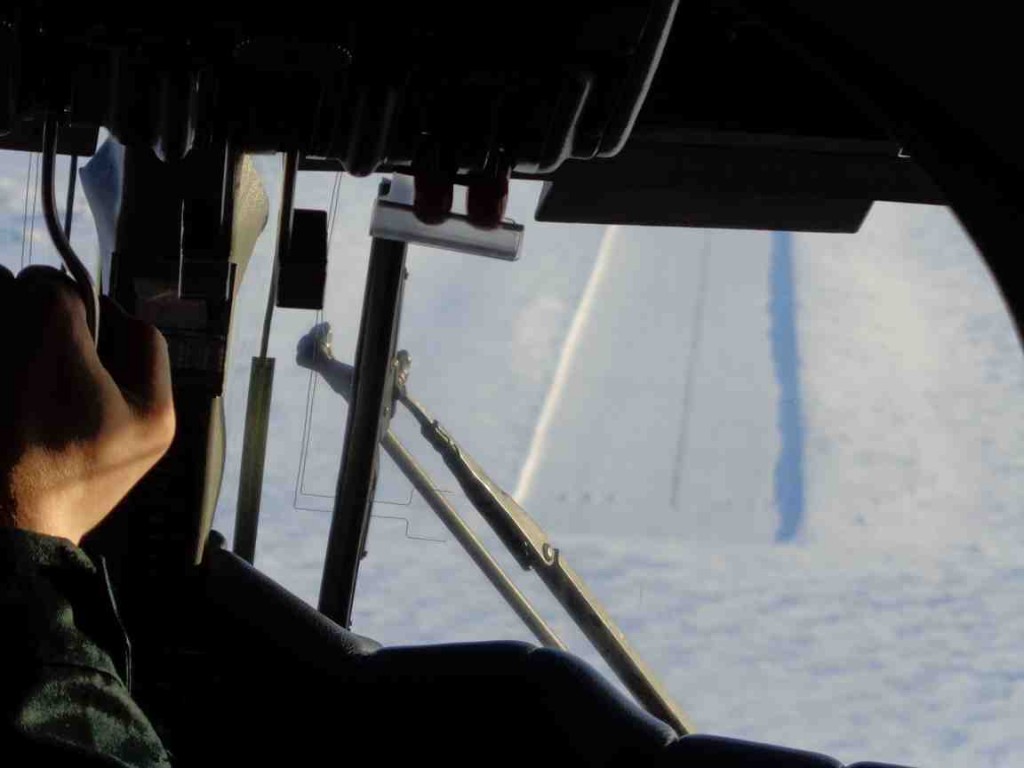 On our approach to Station Nord I pondered how crucial satellites are to everything we had just achieved, and to the survival of our team in the Arctic. The Global Navigation Satellite System (GNSS) had transmitted their signals. Our ice camp buoys had received them and retransmitted their position via an Iridium satellite telephone to a storage location on a ‘cloud’ computer. And we had accessed the buoy data in Alert within a matter of minutes, courtesy of broadband satellite communications. By comparison to Nansen and the early explorers, our job had been made easy by space-based technologies. Today’s experience was a sobering reminder of how much we take satellites for granted. 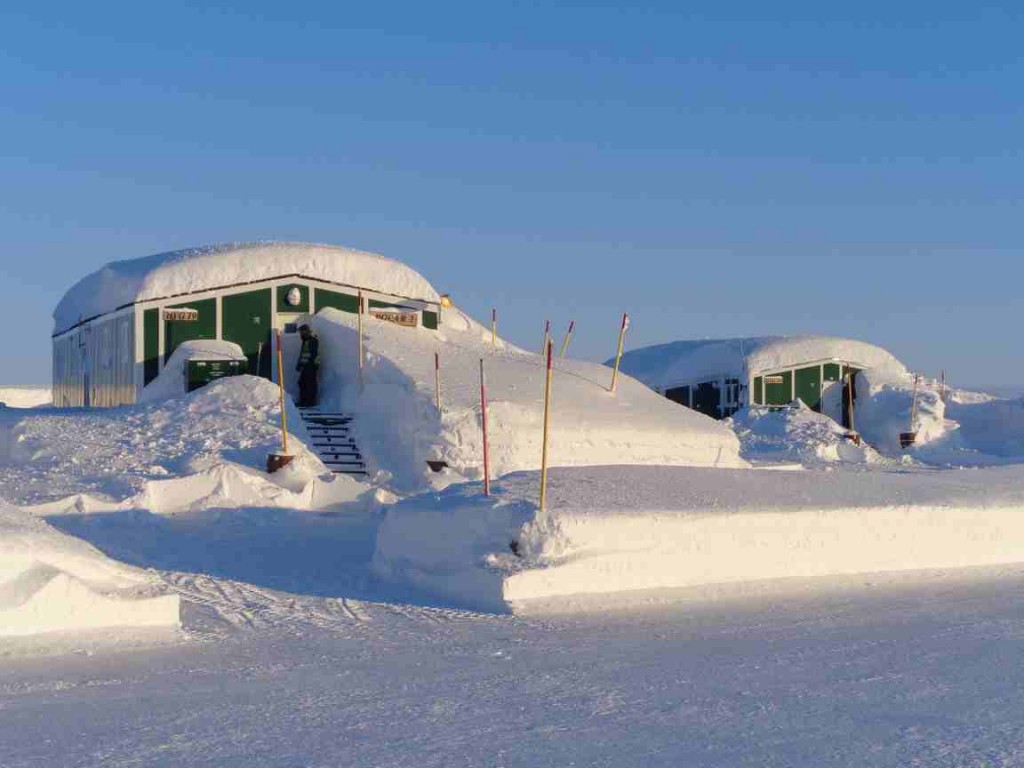