Scientists head to the loneliest place on Earth for ESA missions

Over the next few weeks we will be carefully following two intrepid scientists as they carry out an extensive airborne campaign, called DOMECair, in the far reaches of Antarctica to support two ESA missions.

The reason why Steen Savstrup from the DTU National Space Institute and Daniel Steinhage from the Alfred Wegner Institute (AWI) have headed out to arguably the loneliest place on Earth is to collect measurements that will validate ESA’s SMOS and GOCE missions. 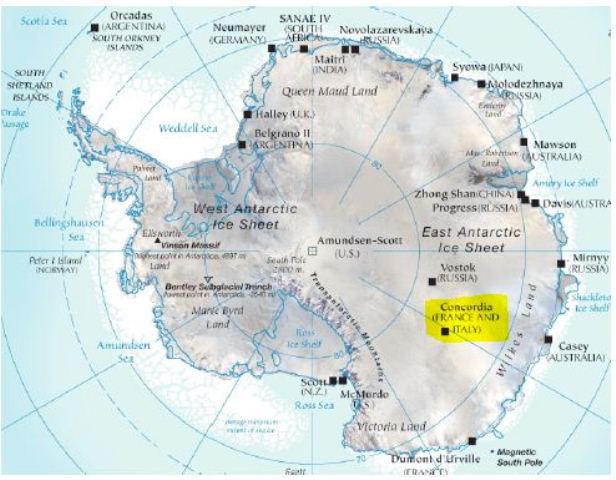 Concordia base is on East Antarctica’s polar plateau – about 3280 m above sea level and about 1000 km from the coast.

Not only will the harsh environment of East Antarctica’s polar plateau where summer temperatures drop to –40°C be challenging, but also the long flights over the vast expanse of nothing but ice will undoubtedly be tough. The plan is to fly across an area of 350×350 km centred at the Dome-C Italian –French base at Concordia, which is highlighted in the map above. 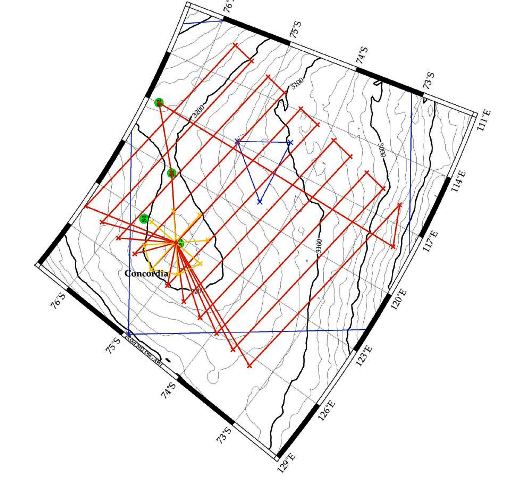 One of the photos that Daniel sent on his way out to Antarctica last week reminded me of just how far away and isolated Antarctica is, and made me smile at the same time. This photo of the boarding times at the airport in Cape Town lists Antarctica – the continent – as the destination, sitting rather oddly between the highly-populated cities of London–Heathrow and Amsterdam! 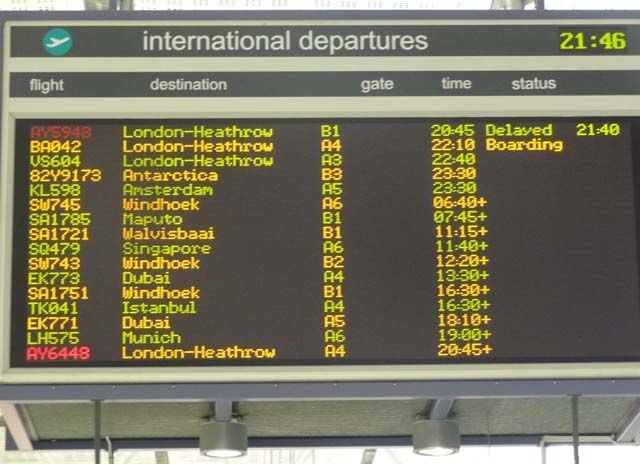 Anyway, the guys have arrived safely and the plan is that they use two different instruments installed in the AWI’s Polar-6 airplane to take validation measurements. One instrument supports ESA’s Soil Moisture and Ocean Salinity (SMOS) mission. This is an instrument, called EMIRAD-2, is an L-band radiometer that is similar to that of SMOS, but from the aircraft gathers images at much higher resolution.

Measurements to support SMOS are already collected routinely from a tower at the station – previous entries on this blog describe its set up and purpose. However, since the instrument is fixed on a tower these measurements are taken of the same spot on the ice. Spatial variability of the L-band passive signal around DOME-C has not been measured to date so the impact of this variability on SMOS measurements cannot be properly assessed.

In addition, the spatial variability in L-band passive signals also impacts the cross-verification of SMOS measurements with parallel missions from other agencies such as the NASA AQUARIUS and SMAP missions over the same site. Quantifying and documenting the spatial variability is thus important to establish long-term cross-calibrated multi-mission L-band measurement timeseries.

The other instrument is the AWI Lacoste and Romberg air–sea gravimeter, which will take gravity gradient measurements over the ice to support ESA’s Gravity field and steady-state Ocean Circulation Explorer (GOCE) mission. These airborne gravity measurements can be propagated to the GOCE flight altitude and used to independently verify the satellite measurements of the local gravity gradients as well as to improve global and regional solutions to the gravity field models generated by the mission.

For the DOME-C area, airborne gravity measurements are sparse or non-existent and thus represent a gap in the required reference high-quality gravity anomaly maps.  Airborne gravity measurement such as those expected through DOMECAir will also contribute significantly to parallel initiatives by the science community such as AntGP to collect and generate a continent-wide high-resolution gravity reference map.

Importantly, this campaign will be the first time that measurements supporting two different missions will be collected at the same time.

The next blog entries will be from the team, but in the meantime we wish Daniel and Steen lots of luck as they start the campaign!