IceSAR and a corner reflector

On Saturday (21 April) the campaign team was up bright and early to get a head start on a special task, which is quite particular to radar sensors in both in the air and space: the deployment of a corner reflector.

These rather futuristic looking trihedral-shaped metallic objects – appearing slightly out of place with the natural rocky surroundings of Greenland –  play a crucial role in ensuring that the radar images generated by the campaign are properly calibrated and, therefore, useful for science.

When imaged from the air, the corner reflectors reflect the incoming radar waves back to the airborne sensor and later on appear like bright start-like points within the radar image. Using these points  as a reference will help scientists from DTU better process the images and establish the ‘radar brightness’of the signals recorded over the Greenland ice cap.

Luckily, the weather was splendid and immediately after a hurried breakfast we set off to set up the corner reflector near the airport.

This was quite an undertaking considering they measure several metres on each side. Luckily we also had the very generous help of Air Greenland staff that came along to help us drill the rock and secure the corner reflector. It has to stay in place until the end of the June campaign!

We mounted it by the river, close to airport and later that day flew over it recording the precious radar echos it reflected. 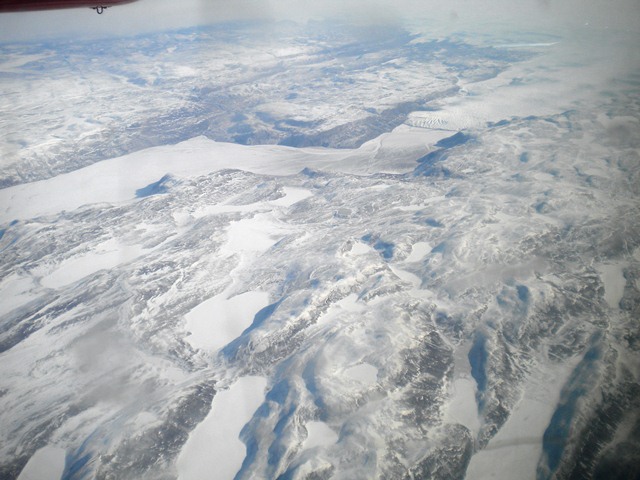 Greenland ice from the air

After the Saturday flight, the whole POLARIS radar system was dismounted (so many wires everywhere!) and stored to make room for ASIRAS and the next phase of the CryoVEX 2012 campaign in Svalbard and Northern Greenland. All in all a good campaign day !