As various teams gather to kick off the measurement campaign around Svalbard, bad weather has delayed today’s flights. Nevertheless, all the equipment is in place on the Austfonna ice cap and ready for when the weather is clear enough to fly. One of the five corner reflectors on Austfonna (credits: T. Schuler)

A team of two from the University of Oslo spent the Easter week on Austfonna setting up the ground control points and preparing the base camp for the main campaign.

Five corner reflectors are now in place awaiting the overflight. As usual, conditions were difficult. This time, however, Easter brought surprisingly mild temperatures and rainfall all across the ice cap! 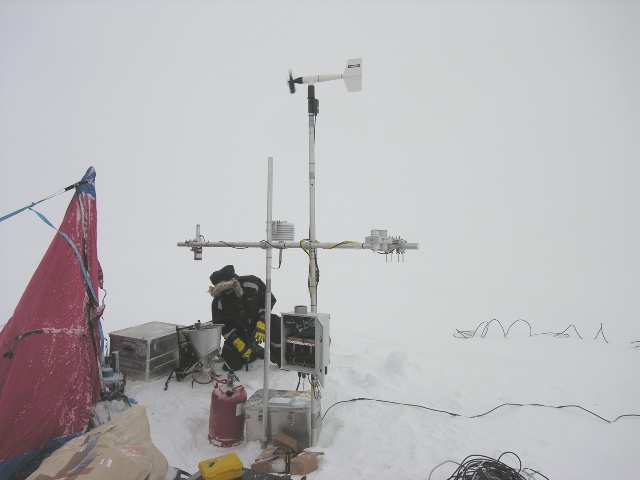 The resulting ice layer on top of the winter snow pack ensures an interesting stratigraphy. This layering will be studied in snow pits and by radar-profiling over the coming days by the main team. Four team members already out there working on the ice.

The remaining three team members are stuck in Longyearbyen due to bad weather and the overflight that was scheduled for today has unfortunately been postponed. Hopefully, the weather will clear soon and we can begin in earnest.