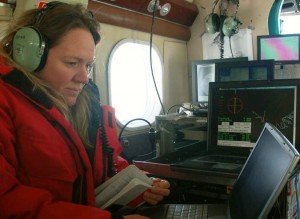 As an ESA campaign coordinator, I sometimes fly along with airborne scientists and observe how data are collected and how the different instruments on the plane are run. This part of my work has always been fascinating and of great value in understanding how to run campaigns together with participants.

Today, I was a guest on the Norlandair Twin Otter at Alert, Canada, carrying the CryoSat airborne simulator ASIRAS. Its cramped interior is packed with instruments and, thankfully, the odd seat for the scientists operating the instruments.

In the past few days, the ASIRAS team members – guided by their friendly and experienced scientist Henriette Skourup from Danish Technical University – have been showing off what the instrument can bring to validation for CryoSat.

With the help of good weather, ASIRAS has already flown an impressive 2300 km in three days. All three of the ground test sites have already been ‘imaged’ by ASIRAS. This is good news to the ground team who have been painstakingly measuring snow and ice properties and can now look forward to ASIRAS data over their site to make comparisons.

I’m particularly impressed with the precision with which the flights over the test sites where made. High-precision flights over the ground sites are difficult to execute, but crucial to the success of the campaign. 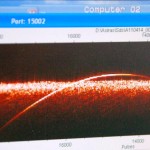 ASIRAS needs to pass within 5 m of the corner reflectors that were earlier carefully erected by the ground teams to ensure that airborne and ground data can be properly compared later on. During the campaign, the pilots and scientists running ASIRAS on-board the Twin Otter have come through with flying colours, ‘nailing’ several passes over each site to within a few meters – no mean feat!

The clear ASIRAS signatures of the corner reflectors studied quickly after each flight show how incredibly good the data is. 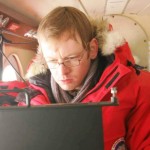 The image on the left is for the techies out there – it shows the spectacular ASIRAS radar signature from a corner reflector below. The well-formed hyperbola in the middle highlights both teh quality of the measurement and the proximity of the plane to the position of the reflector.

Another spectacular ‘first’ that comes to my mind, has been the tandem underflight of a CryoSat track of ASIRAS on the Norlandair Twin Otter and the EM-Bird on board the Basler aircraft all the way up to 86° North, only 4° from the North Pole.

Together – separated by only a minute or two – the two aircraft and their precious scientific crew carefully flew directly underneath the track of the CryoSat satellite orbiting at 7km/s overhead. To accomplish this feat, the pilots of both planes needed to keep in constant visual contact, as well as carefully follow the track laid down by CryoSat.

The result of their efforts is a unique opportunity to bring together the ice-thickness measurements by EM-Bird and the high- and low-resolution radar altimetry of ASIRAS and CryoSat, respectively. This has resulted in a terrific chance to cross-compare all three measurements.

All in all, ASIRAS – the workhorse of CryoSat validation – guided by experts, Henriette and Indridi from DTU, has been showing its mettle and taken this campaign huge leap forward.