I am back on Earth but the mission continues 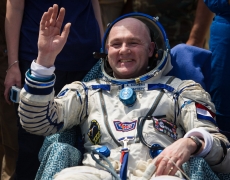 My return to Earth with the Soyuz was an intense experience. After undocking we conducted some tests and orbited Earth one more time. Above the South-Atlantic Ocean the braking motor fired for four minutes. 140 kms above Egypt the spacecraft separated into three parts. Above Iraq we entered the atmosphere and the air started to glow. The first part was beautiful, we were surrounded by an orange cocoon. After that the ride was simply unpleasant. We were pushed deeper into our chairs and suffered 4,7 times normal gravity. The parachutes opened 10 kms above the ground and our capsule shook violently. 15 minutes later we landed with a jolt. It felt like a serious car crash. Luckily, search and rescue arrived quickly to pull us out of the cramped capsule. I could not wait to get out as my leg was stuck and I could not feel my foot anymore. Once I was sitting in the chair in front of the television camera I was laughing again. That was the moment I thought: yes, it is all over, everything will be fine.

Phoning Helen
I phoned my wife briefly. Afterwards a helicopter took me to Karaganda and from there it was 18 hours by plane to Houston where my family and mother were waiting for me. It was very special to see them again after half a year in space. When I landed in 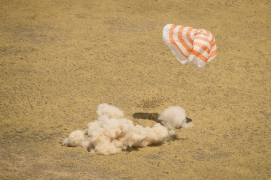 Houston, the world still felt different, as if a large magnet was pulling at me continuously. For the first time I could feel what gravity really feels like, as I was used to the weightlessness on the ISS. Sometimes it is scary. When I was lying still in the airplane and later in bed I felt as if I was continuously falling backwards. The feeling of being paralysed and the fact that I could not walk was also unpleasant.


Baseline data collection
If you look at photos of the landing or looked at the landing on television you might think that my mission is complete. But that is not how I experience it. I took part in research for hours on the plane and later at NASA’s crew quarters in the Johnson Space Center. I was attached to electrodes and blood pressure monitors, gave blood, urine, saliva and conducted many other tests to collect as much medical data as possible. We did this so-called baseline data collection before my mission as well. We repeat the tests now so that scientists can compare the data from before, during and after the flight. 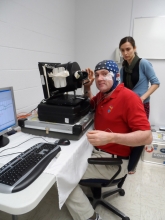 They need the data to research what half a year of weightlessness has done to my body.

During the following days and weeks this research will continue so my mission is not over. I have sessions planned that I also had done on the ISS such as Neurospat and ICV. I must give debriefings whereby I recount my experiences of  my time working above Earth. I must do reaction tests and answer many questions. In addition a large amount of time has been reserved for exercise and physiotherapy. My muscles are clearly weaker after my mission, and my coordination is terrible, so I must exercise to regain my strength.

4th of July
Luckily my recovery is going quickly. The first days I was mainly tired and sick. But I could celebrate the 4th of July, American Independence Day, with my family. We all enjoyed immensely a fantastic fireworks display

above Clear Lake. I saw the almost-full Moon  rise very slowly, much slower than in space of course. I smelled the trees, the flowers and the smell of fresh food on my plate. It is beautiful in space and I would return if I had the chance. But here on Earth things are not so bad either…