The best time lapse video and my daughters joke 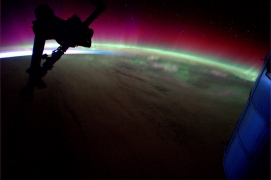 In the last few months I was part of the Expedition 30 crew. We took over 250.000 pictures together documenting life on the Space Station, the Earth and visiting cargo ships. A large proportion of these pictures were converted to night-time time lapse videos of Earth and the universe. A typical video contains hundreds of pictures. Put a nice soundtrack to the video and the result is amazing. I saw a time lapse video that we made and I thought: I want to go there, I want to go to space! The images and the music made me think this funny thought. The videos look surrealistic with green and red northern lights and Earth moving rapidly. It looks even more beautiful than real life.

We laughed loudly during our last meal with the full Expedition 30 crew. Bert Vis, a space historian, made a fake press release in official ESA style announcing that a crew change had taken place. Instead of sending Joe Acaba to launch with the Soyuz capsule in May, my daughter Megan would visit us. Don Pettit would have to stay another half year in space so Megan could take his place and return to Earth with me. He did not mind at all of course. The ‘press release’ included official portraits of the new crew members. It is great to receive jokes like this from Earth!