A lot of equipment we work with is related to human physiology. I am not new to this field. I have been working at ESA since the nineties and I originally worked on experiments for the Space Shuttle’s European Spacelab and for the Russian Mir space station. One of these experiments is called MARES (Muscle Atrophy Research and Exercise System), it uses an instrument that can measure the strength of many muscles in a human body. As scientific coordinator I took part in designing this equipment and now I have worked with the hardware on the Space Station. This is quite an experience. I had hoped that I would be able to conduct experiments with MARES as well, but we are not quite ready yet. We are still in the assembly stage. I put some components together and have done some first tests. I will be back on Earth when the muscle monitor is put into operation.

Spacewalk
In the meantime my Russian colleagues went for a stroll, a spacewalk or EVA (Extra Vehicular Activity) in astronaut jargon. Astronauts do not often venture outside because of the risks involved. Furthermore, construction of the Space Station is almost complete and EVA’s are less necessary. Anton and Oleg started work on the Pirs and Poisk docking ports, they had to move some parts to prepare for future operations. I was eager to watch, but I could not observe them from ESA’s panoramic window Cupola due to safety restrictions in the ISS. Should the Station need to use the engines 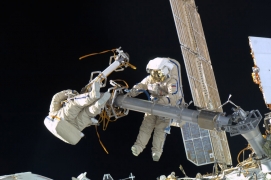 to correct its orientation during the spacewalk, the Cupola windows might get damaged by the exhaust gases.


So I went to my Soyuz capsule to take some pictures. I had a beautiful view of the activities from the Soyuz window. My colleagues Dan and Anatoly sat in the other Soyuz. Not because they wanted to, but for safety. In an emergency the coupling mechanism above the airlock would have to be used as a temporary airlock and Dan and Anatoly would not be able to reach their Soyuz. The rules state that astronauts always need to be able to reach their Soyuz. As a precaution they went to sit out the spacewalk in their capsule. Once the activities outside had finished they were allowed back in the ISS. This is common up here. Safety is paramount. Thinking about safety and following procedures takes up time. A lot of time!