(English) Putting the Soyuz in a spin 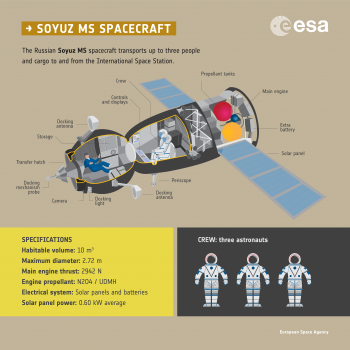 Already cramped with no privacy the spacecraft has limited means of communication, relying on radio contact with Earth at specific times of day. Circling Earth 34 times in its approach to the International Space Station firing up the engines a few times to correct its course.

When the Soyuz spacecraft is not firing its engines to change its orbit or docking with the International Space Station the spacecraft is put into a slow spin, but it is not for the astronaut’s comfort!

A spin on satellites or spacecraft can stabilise them and keep them pointing in the same right-angle direction to the plane of the spin. The technique is common for so-called ‘spin-stabilised satellites’ to save fuel while keeping them in the correct orientation. The weather satellite Meteosat for example uses this method.

The Soyuz is put into a ‘flat-spin’ along its vertical axis to keep its solar panels pointing at the Sun, so the spacecraft is spinning on the horizontal plane or yaw. This is important for keeping the batteries charged. During a six-hour flight to the International Space Station the spinning is not necessary and not performed.

There are three ways to start the Soyuz spinning and keep the solar panels in the best position.

Since the last burn the crew have been spinning again that was put in motion using the third, calculated method. They are now spinning at 2.4° per second.

Far from being an extra level of comfort for the astronauts inside, it actually adds a level of disorientation. In addition, looking out of the window to observe the stars or our planet turns into fleeting. In this video Sergei Volkov himself explains what it feels like to be spinning in the Soyuz, but unfortunately the animation shows the spacecraft spinning on the wrong axis.