Week in space – all of the stars plus a spacecraft release

Science never sleeps on the International Space Station and the week of 5 November was no exception.

Alongside the activation of ESA’s new Life Support Rack, continued research into complex crystals as part of the PK-4 experiment, a spot of space gardening, and numerous uncrewed experiments running in the Columbus lab, ESA astronaut Alexander Gerst spoke to a very special visitor and unleashed a very special spacecraft. Read on to find out more.

Plasmas are ionized gases produced by high temperatures like the sun, or by electric fields. Complex plasmas are plasmas that – besides electrons, ions and neutral gases – also contain micro-particles such as grains of dust.

The Plasma Krystall-4 (PK-4) collaboration between ESA and Russian space agency Roscosmos aims to take a closer look at these complex plasmas, and this week the crew has been doing just that. 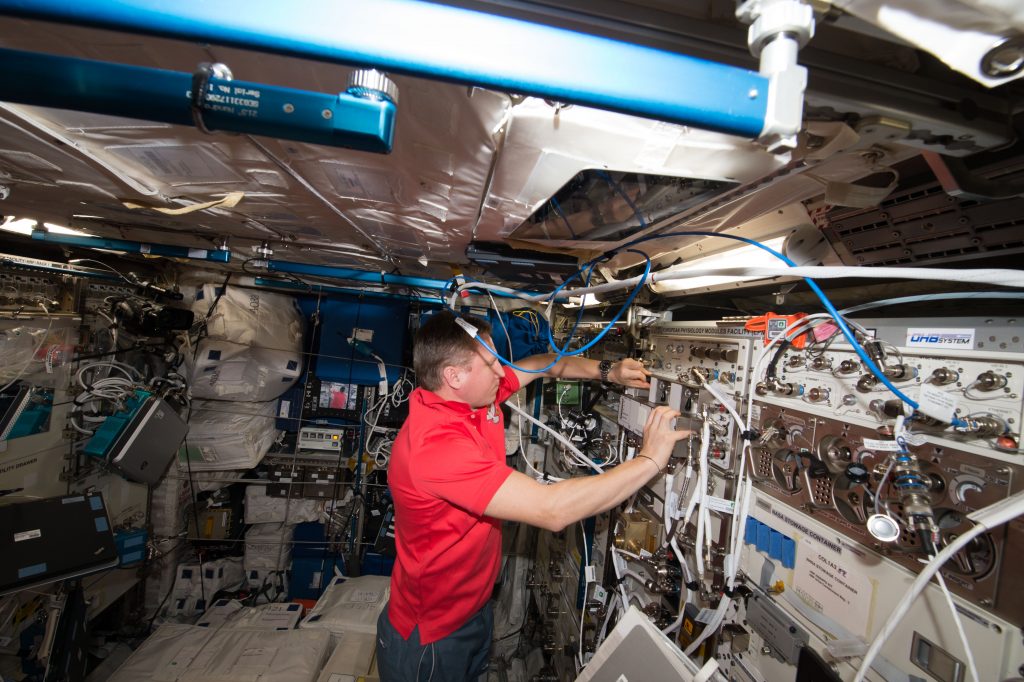 Using what’s known as the ‘Argon gas line’, they performed particle trapping activities. This experiment was initiated via the European Physiology Module (EPM) laptop and allowed the investigation of plasma flows and related instabilities in the absence of gravitational effects.

On Earth the particles are influenced by gravity but in space they behave similarly to charged atoms in a fluid or crystal structure allowing researchers to better understand the hidden atomic interactions of our world.

With Thanksgiving fast approaching, the crew has also been busily tending their salad crops. This week they placed markings on watering syringes in preparation for future plant watering. They also checked Veggie-03 plants for growth progression and watered these as necessary.

During future missions to the Moon, Mars and beyond, crew members will need to grow their own food. NASA’s Vegetable Production System (Veggie), set up in Europe’s Columbus laboratory, helps researchers better understand how plants respond to microgravity – an important first step toward growing sustainable fresh food in space.

Crops cultivated as part of Veg-03 include Extra Dwarf Pak Choi, Red Russian Kale, Wasabi mustard, and Red Lettuce. Each of these crops will be harvested on-orbit, with samples returned to Earth for testing.

Alexander and his NASA crew mate Serena Auñón-Chancellor enjoyed a surprise phone call from British musician Ed Sheeran during his visit to NASA’s Johnson Space Center in Houston, USA. After talking tiny towns and things they missed from home, Alexander extended an invitation for Ed to visit the European Astronaut Centre in Cologne, Germany next year. Watch the full clip below.

Blog readers may also be interested to watch Alexander’s appearance in one of Germany’s most popular television and online news service, ARD Tagesschau and Tagesthemen. In a 20-minute interview Alexander answered questions from television and social media editors on topics ranging from future lunar exploration to work and life on the International Space Station – including a question about dogs in space. Watch in German only below:

At the time of release, the Space Station was flying 409 km over the northern Pacific Ocean. Earlier, ground controllers used the robotic arm to unberth the cargo craft. Perhaps most interesting, for the first time the craft carried a small reentry capsule – designed by JAXA to be ejected from a hatchway after the craft’s deorbit burn and return small payloads to researchers on Earth.

The week of 12 November is another busy one for spacecraft operations, with not one but two vehicles expected to dock at the Station on Sunday.

First to launch is the 10th Cygnus cargo craft from US company Northrop Grumman on 15 November, followed closely by the 71st Russian Progress resupply vehicle on 16/17 November.

Also, ahead is another action-packed week of science. But you will have to come back next week to hear more about that. In the meantime, if you have not yet watched the first ever 8K video from space, we recommend making YouTube your next stop.