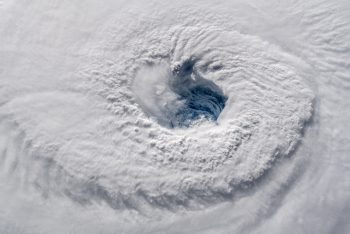 Hurricane Florence is heading towards the East coast of USA. ESA astronaut Alexander Gerst took photos of the Hurricane from the International Space Station that circles Earth 400 km above. Even orbiting our planet from such heights the size of the Hurricane is incredibly impressive and humbling.

The hurricane weakened slightly after the photos were taken, but the US National Hurricane Center is still warning of life-threatening storm surges and flash flooding, and hurricane-force wind. Many people have evacuated their homes due to the intense weather that approaches.

The astronauts took the photos from the European-built Cupola observatory on request from mission control. Although 400 km altitude might seem far away the images from the Space Station can complement data from dedicated weather and Earth observation satellites so astronauts are sometimes given tasks to grab a camera and snap a shot of our planet.