The Expedition 56 crew (Drew Feustel, Ricky Arnold and Serena Auñón-Chancellor, ESA astronaut Alexander Gerst and Roscosmos astronauts Oleg Artemyev and Sergey Prokopyev) resumed a regular schedule of work Friday on the International Space Station after spending the day Thursday locating and repairing a leak in the upper section of one of the two Russian Soyuz vehicles attached to the complex.

With the station’s cabin pressure holding steady, most of the crew pressed ahead with a variety of scientific experiments.

Flight controllers at the Mission Control Centers in Houston and Moscow, meanwhile, continued to monitor pressure levels on the station following the patching of a small hole Thursday in the orbital module, or upper portion of the Soyuz MS-09 spacecraft. The Soyuz is docked to the Rassvet module on the Earth-facing side of the Russian segment. The tiny hole created a slight loss in pressure late Wednesday and early Thursday before it was repaired by Soyuz commander Sergey Prokopyev of Roscosmos. 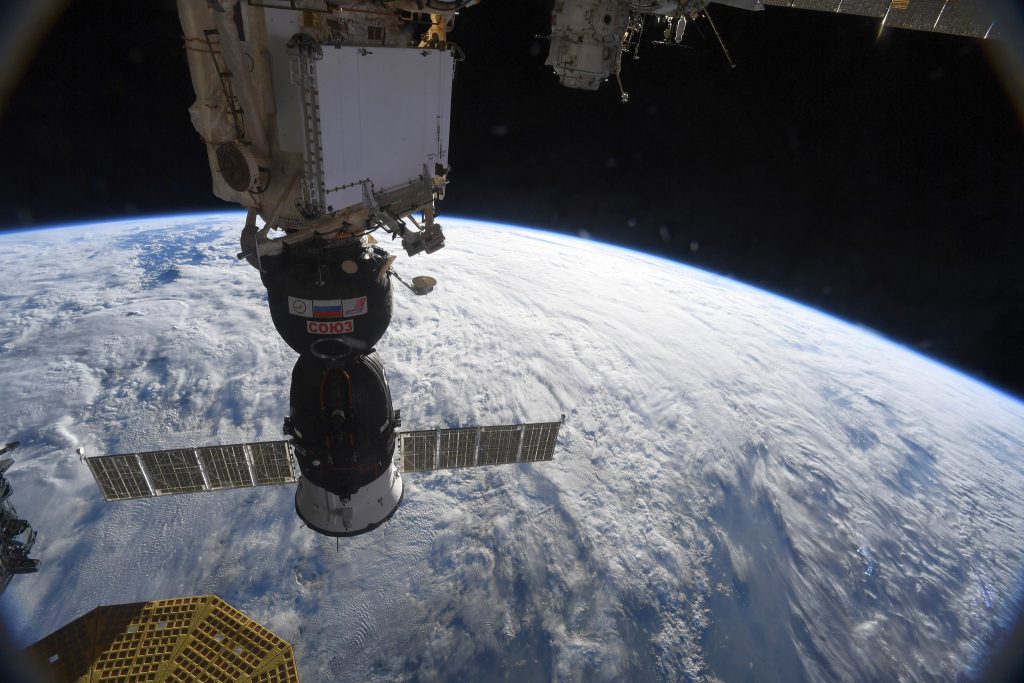 The International Space Station’s cabin pressure is holding steady after the Expedition 56 crew conducted repair work on one of two Russian Soyuz spacecraft attached to the complex. The repair was made to address a leak that had caused a minor reduction of station pressure.

After a morning of investigations, the crew reported that the leak was isolated to a hole about two millimeters in diameter in the orbital compartment, or upper section, of the Soyuz MS-09 spacecraft attached to the Rassvet module of the Russian segment of the station.

Flight controllers at their respective Mission Control centers in Houston and Moscow worked together with the crew to effect a repair option in which Soyuz commander Sergey Prokopyev of Roscosmos used epoxy on a gauze wipe to plug the hole identified as the leak source. As the teams were discussing options, flight controllers in Moscow performed a partial increase of the station’s atmosphere using the ISS Progress 70 cargo ship’s oxygen supply. Flight controllers in Houston are continuing to monitor station’s cabin pressure in the wake of the repair.

Meanwhile, Roscosmos has convened a commission to conduct further analysis of the possible cause of the leak.

Throughout the day, the crew was never in any danger, and was told no further action was contemplated for the remainder of the day. Flight controllers will monitor the pressure trends overnight.

All station systems are stable and the crew is planning to return to its regular schedule of work on Friday. 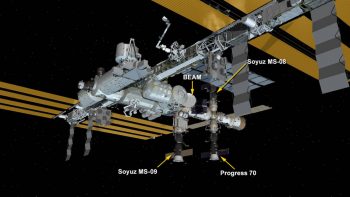 International Space Station Configuration as of Aug. 22, 2018: Three spaceships are docked at the space station including the Progress 70 resupply ship and the Soyuz MS-08 and MS-09 crew ships. Credit: NASA.

The crew aboard the International Space Station is conducting troubleshooting and repair work today after the discovery of a tiny leak last night traced to the Russian segment of the orbital complex.

The leak has been isolated to a hole about two millimeters in diameter in the orbital compartment, or upper section, of the Soyuz MS-09 spacecraft attached to the Rassvet module of the Russian segment. This is a section of the Soyuz that does not return to Earth.

The rate of the leak was slowed this morning through the temporary application of Kapton tape at the leak site. Flight controllers are working with the crew to develop a more comprehensive long-term repair.

Once the patching is complete, additional leak checks will be performed. All station systems are stable, and the crew is in no danger as the work to develop a long-term repair continues.

The leak has been identified and repair procedures are ongoing. 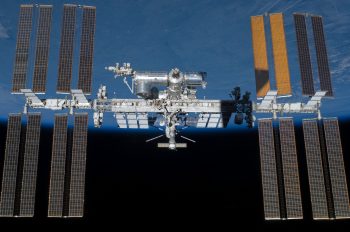 Last night International Space Station mission control noticed a reduction of pressure. As the pressure loss was very small and the six astronauts from Russia, USA and Germany are in no danger they were allowed sleep as normal.

This morning the crew gathered in the Russian segment of the Space Station before searching for the cause of the pressure change.

Working with mission control in Houston, USA, and Moscow, Russia, the astronauts localised a leak that appears to be in the Russian segment. The crew consisting of NASA astronauts Drew Feustel, Ricky Arnold and Serena Auñón-Chancellor, ESA astronaut Alexander Gerst and Roscosmos astronauts Oleg Artemyev and Sergey Prokopyev are working through troubleshooting and repair procedures.

The crew are healthy and safe with weeks of air left in the International Space Station reserves.