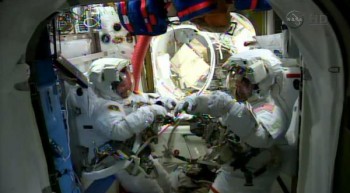 Before the Alexander and Reid head out into deep space they ‘prebreathe” to purge their bodies of nitrogen.

The disadvantage to working in lower pressure is that as you transition from high to lower pressure is that the normal nitrogen in your blood can form dangerous bubbles inside. This is a very serious condition known as decompression sickness or ‘the bends’. Scuba divers are at risk as they return to the sea surface after spending time deep underwater (at high pressure compared to sea level). Astronauts go through a similar process, leaving their higher pressure environment inside the Space Station to the lower pressure spacesuit. 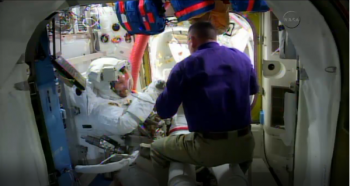 An effective way to stop the nitrogen from causing problems is by removing it altogether. This is what Alexander and Reid are doing right now. By breathing pure oxygen for two hours their bodies will no longer have any nitrogen. The astronauts do some light exercise to help speed up the process as well as continue preparing for the spacewalk.