As astronauts we have a unique view of our planet looking down from 400 km above. Some things that on Earth we see in the news every day and thus almost tend to accept as a “given”, appear very different from our perspective. We do not see any borders from space. We just see a unique planet with a thin, fragile atmosphere, suspended in a vast and hostile darkness. From up here it is crystal clear that on Earth we are one humanity, we eventually all share the same fate. 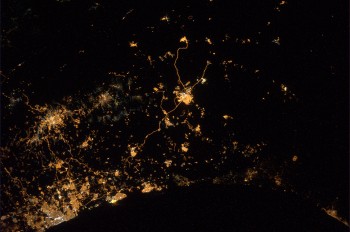 On the day that I took this photo, I floated into the Cupola window module because I suddenly noticed something that I had never seen before. There were streaks of light going forth and back over a dark Earth, occasionally lit up by orange fireballs. I took my camera and took a few photos before I finally realized what I just saw, and where we just flew past. Even though the photo itself does not contain any explosions, I could see them occur several times.

What came to my mind at the time of this photo was, if we ever will be visited by another species from somewhere in the universe, how would we explain to them what they might see as the very first thing when they look at our planet? How would we explain to them the way we humans treat not only each other but also our fragile blue planet, the only home we have? I do not have an answer for that.