When the Dragon spacecraft arrived at the International Space Station on 16 August with fresh supplies and new experiments ESA astronaut Paolo Nespoli was waiting to quickly unpack some biological samples and place them in a waiting incubator. 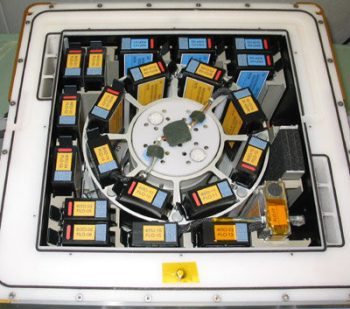 The ESA incubator-centrifuge, called Kubik, is a staple for biological experiments in space. It has flown to the Space Station since 2004 and combines a centrifuge with a heater element to keep samples at the right temperature. Kubik can spin samples to create artificial gravity levels, allowing researchers to know for sure if weightlessness or other space factors are influencing biological cells.

To prepare for the arrival of the new experiment Kubik needed to be set up earlier in the week for power and warming up. Paolo plugged in the unit and ran some tests and later confirmed that Kubik was running at 37°C – not coincidentally the temperature of a healthy human being. Once at the Space Station it is important the cells are transferred quickly as they are stored at room temperature in the Dragon which is not ideal for their preservation.

One of the ASI experiments called SERISM, follows on from ESA’s Roald and Reslem experiments that investigated on a molecular level why immune cells die more quickly in space. SERISM will look at human blood-derived stem cells from healthy donors on Earth that are transported to the Space Station in Experiment containers that slot into Kubik. Here they will be reprogrammed to produce bone material in microgravity and preserved at different times using chemical fixatives for later analysis.

Back on Earth scientists will analyse the samples and chart the molecule’s changes over time, comparing the different sets and a control sample that did not go to space. The researchers at the Campus Bio-Medico University of Rome are interested to find out how astronaut’s bone metabolism changes on a molecular level.