Earth seen from Mars: We are here

As you have seen from our recent blog posts and Flickr updates, VMC has been busy capturing some spectacular views of Mars.

However on 3 July, we once again turned away from Mars to look towards a more distant target. 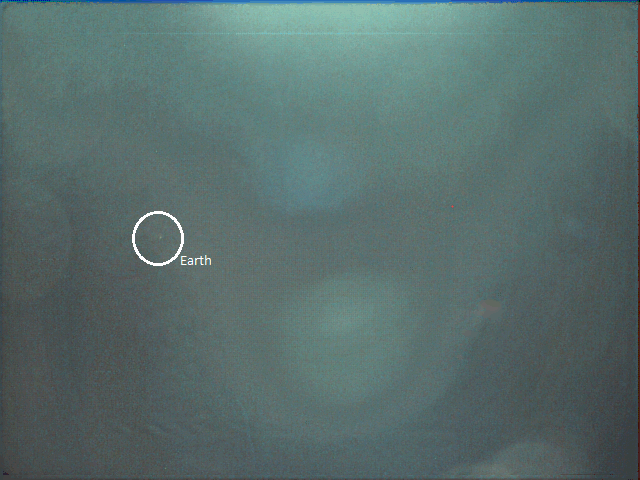 Ever since our successful test of the VMC camera's long exposure mode (which brought us our first direct images of Phobos), there's one observation we've been keen to attempt:

An image of Earth!

Our chance observation of Jupiter in April served double duty as a dry run to evaluate if VMC stood a chance of detecting the famous pale blue dot.

With the success of the Jupiter pictures, we felt there was a good possibility that, whilst Earth would likely be faint, it would just be visible.

However, imaging Earth from a Mars-orbiting spacecraft using a camera with no specialised optics is not as simple as it sounds. So we thought we'd provide a brief overview of the kind of things that go into taking a picture like this.

One of the first issues we had deal with was determining the optimal time to take the photo.

Earth and Mars are both orbiting the Sun at different rates, so the angle between them regularly gets larger then smaller.

The larger the Mars-Sun-Earth angle, then – when viewed from Mars – the larger the percentage of Earth that is illuminated. So, you might conclude that we should take the image when this angle as big as possible.

However there are two problems with this:

This is not only prohibited in the interests the safety of our instruments but would also mean imaging something as faint as the Earth would be impossible as the light from the Sun would blind the camera.

The problem is illustrated below. 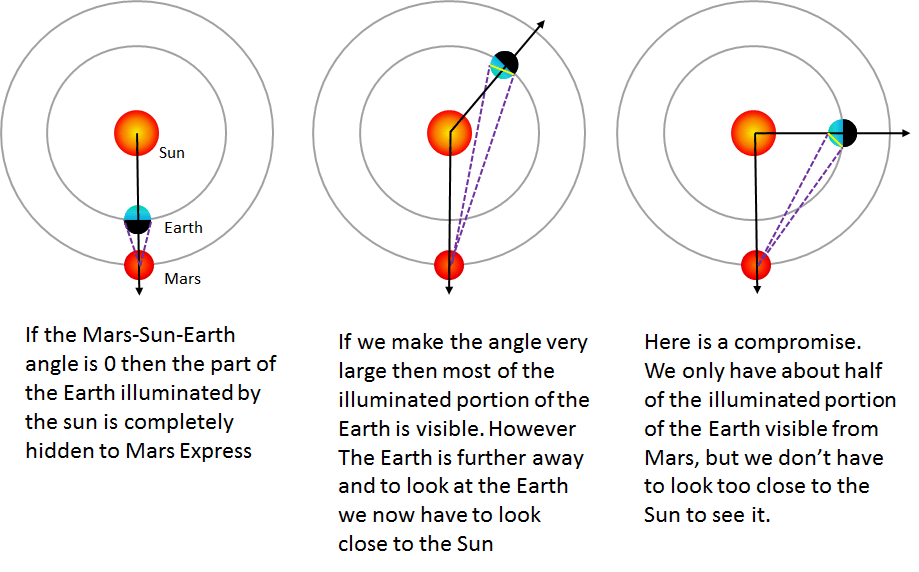 So what we needed was some middle ground, a period where the angle is large enough such that a sufficient amount of Earth is illuminated, but not so large that the Sun is too close to the camera's field of view.

With the help of JPL's HORIZONS solar system ephemerides computation service we were able to work out that the solid angle of the illuminated fraction of Earth was at its maximum on 21 June this year. We then tried to find an observation opportunity as close to this date as possible.

To keep the Sun as far from the camera's field of view as possible, it was decided we would not aim to have the Earth in the centre of the image, but instead offset it by 10 degrees. 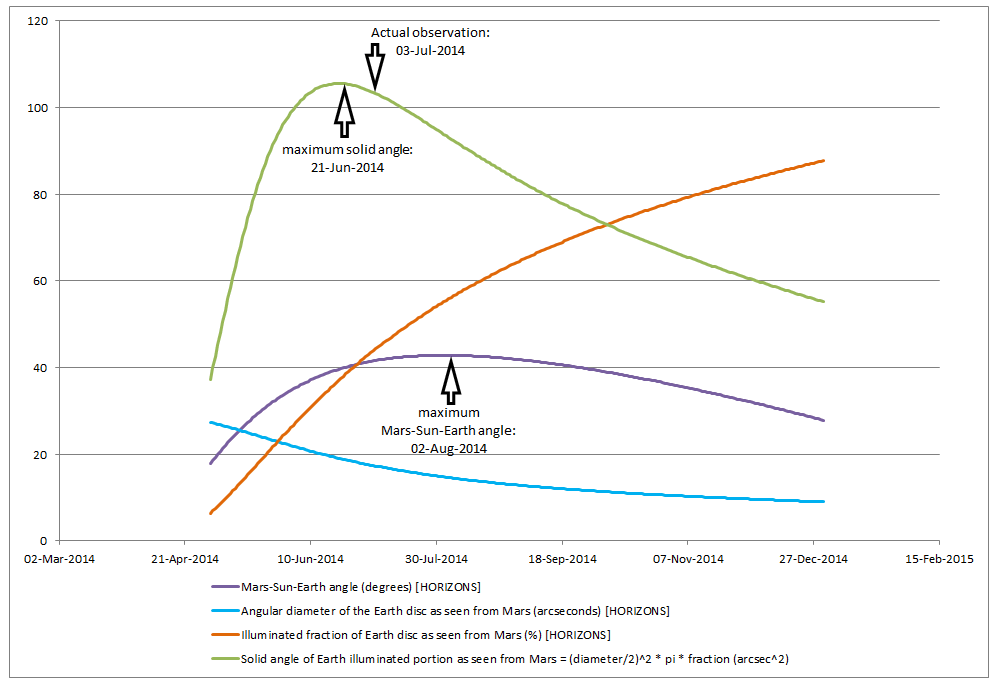 The solid angle of the illuminated fraction of the Earth was at its maximum on 21 June this year. Date via JPL Horizons. Credit: ESA

The next issue we encountered was the need to tell the spacecraft to point VMC at Earth.

To determine where we point the spacecraft, first the instrument teams have to tell our Science Planning team based at ESAC, in Spain, where they want their instruments to point and when. This is processed by the science planners and then sent here to ESOC to the Mars Express mission planning team.

Our mission planning system takes in all of the pointing requests that our science planners have sent, analyses them to check for critical factors like power consumption, illumination of the solar arrays and data generation as well as other constraints and requirements. 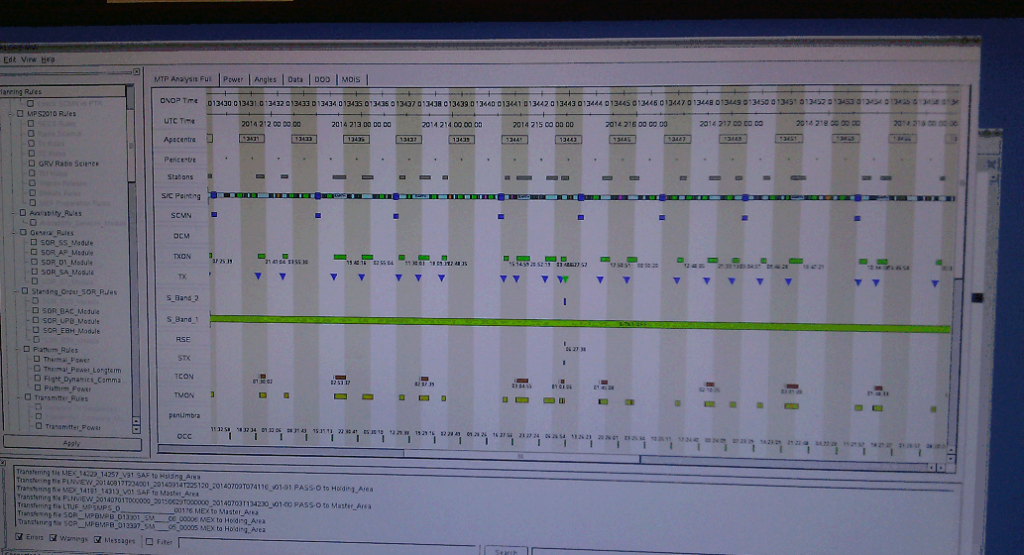 If all checks are OK, one of the outputs is a list containing an entire month's set of spacecraft pointings.

To fit in with this process, we generated a single new VMC 'Earth' pointing by using a software tool we developed ourselves. This new pointing was then added to the monthly list sent by the science planners and processed and checked by the mission planning system.

This set of spacecraft pointings is then sent off to the flight dynamics team here at ESOC. They are able to determine the spacecraft's exact position at any point in time.

Combining this information and knowledge of the spacecraft layout and the position of each instrument, they are able to calculate the orientation the spacecraft must have for it to point a specific instrument toward its desired target.

These calculations are performed for an entire month of observations, while checking that the pointings do not violate any safety constraints. Implementing, maintaining, enforcing and providing strict constraints protects delicate optics and sensors against the perils of excessive heating and over-illumination by the Sun.

As with all spacecraft pointings, our custom Earth pointing had to pass these strict tests for us to be permitted to attempt the observation.

After flight dynamics completed their analysis, the results were then returned back to mission planning, where they can be converted into sets of commands for the spacecraft's attitude and orbit control system.

Once these commands are generated they are checked by the mission planners and the flight control team before being uplinked to Mars Express (once per week).

At this point, the observation has been scheduled, the pointing commands have been generated and checked and up-linked to the spacecraft and the final stage was to then create the command sequence to operate the camera.

This involves telling it when to switch on, how many images to take, the exposure settings to use and when to switch off – and to tell the on-board computer to generate a report of the amount of data the observation produced to enable us to keep track of the volume of stored data on board the spacecraft.

As we expected Earth to be faint, and to maximise our chances of getting a decent image, we decided to use the same settings as our Jupiter pictures, as they contained a wide range exposures from 30 seconds down to 2 seconds.

Once this is all on board the spacecraft, we then have to wait until the images are taken and then down-linked, where we can then run them through our processing tools. 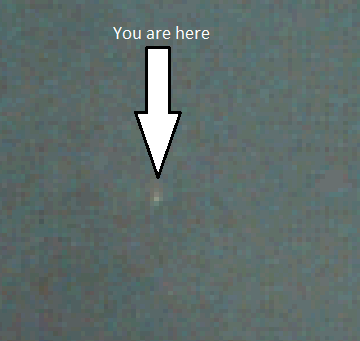 The bright patches you can see are sunlight hitting the top of the recess VMC sits in and then being reflected off the camera lens.

However, on the 2-second exposure, this glare is reduced sufficiently to leave Earth clearly visible in the middle left of the image (Note: the colours here are the result of the processing tool we run the VMC images through).

At first glance it doesn't look like a particularly exciting photo. Some lens flare and a small faint dot are visible.

However, remember: there are 7 billion people living on that small faint dot!

This quote from Carl Sagan describing the famous Voyager 1 photo 'pale blue dot' sums it up rather nicely:

Consider again that dot. That's here. That's home. That's us. On it everyone you love, everyone you know, everyone you ever heard of, every human being who ever was, lived out their lives. The aggregate of our joy and suffering, thousands of confident religions, ideologies, and economic doctrines, every hunter and forager, every hero and coward, every creator and destroyer of civilization, every king and peasant, every young couple in love, every mother and father, hopeful child, inventor and explorer, every teacher of morals, every corrupt politician, every 'superstar,' every 'supreme leader,' every saint and sinner in the history of our species lived there.

As usual, these images along with every other photo VMC has taken are available on our flickr channel.

Editor's note: Thanks to Simon Wood and the entire MEX team for these excellent images and report.