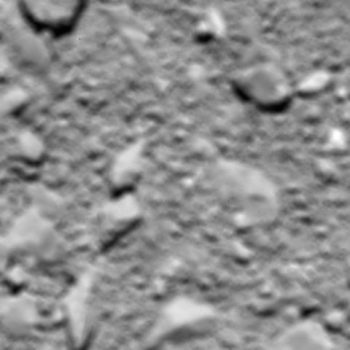 Rosetta’s last image, taken 20 m from the surface of the comet. ESA/Rosetta/MPS for OSIRIS Team MPS/UPD/LAM/IAA/SSO/INTA/UPM/DASP/IDA

In case you missed it during our live coverage on Friday, Rosetta’s impact site has been named Sais.

Mission Manager Patrick Martin announced the name of the impact site after contact with the comet’s surface was confirmed and the mission declared complete.

He said: “The Rosetta Stone was originally located in Sais, and we shall name the impact point as such so we can finally say that Rosetta has come home to Sais.”

The mission was named after the Rosetta Stone, itself so named because it was found in a town called Rashid (Rosetta), having thought to have been moved there from a temple in a town called Sais.

Rosetta’s last image of the comet surface is highlighted today as Space Science Image of the Week.