Living with a comet: a CONSERT team perspective

Rosetta and Philae were both equipped with the CONSERT radar experiment in order to bounce radio waves between the two to study the internal structure of the comet. Little did we know that this instrument would play a critical role in locating where the missing lander had bounced to after its unexpected landing on 12 November. Instrument Principal Investigator Wlodek Kofman shares how CONSERT’s modest measurements have yielded big results.

It is good to remember that CONSERT, in the morning of 13 November 2014, provided the first estimation of where Philae had bounced to the previous day, based on the data collected overnight from 12 to 13 November. After that the Rosetta project requested to add three additional operations of CONSERT in order to perform the triangulation and improve the localization. The triangulation measurements were done in the special ‘adapted operation’ mode that was designed and implement in a very short time, due to the unexpected landing conditions. 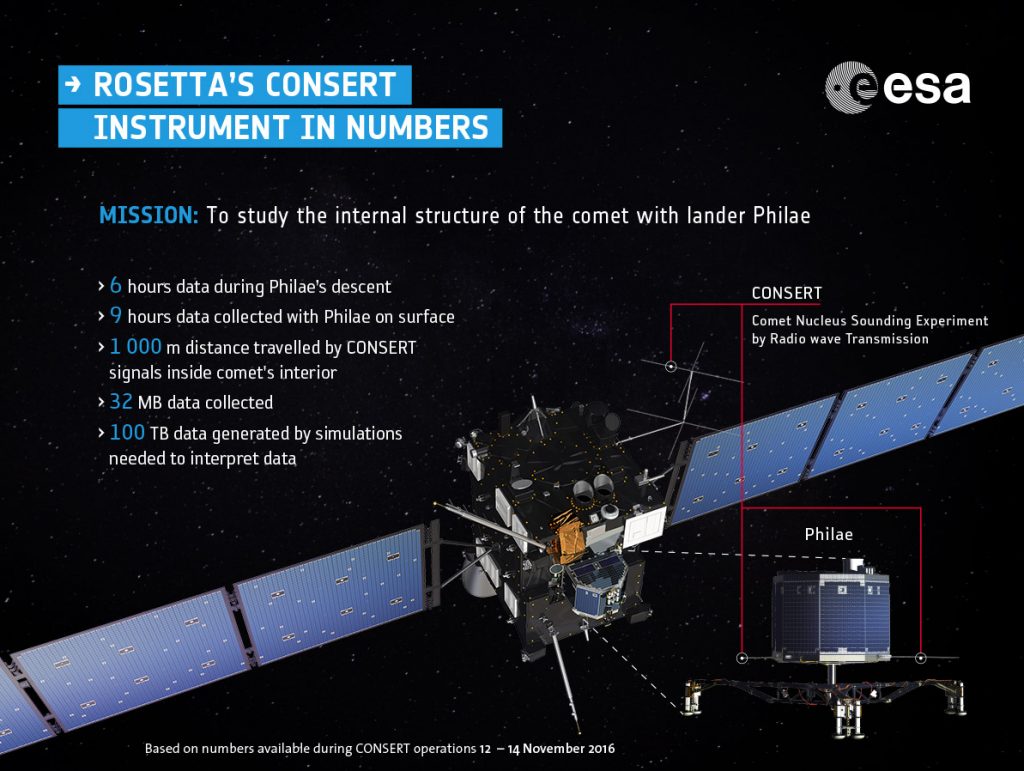 Although the total amount of data collected – 32 Mbytes – is rather small, we need to run 3D computer simulations with ‘heavy’ comet shape models that generate 100 TBytes of temporary data in about 1 million total CPU-core computing time in order to interpret these measurements.

In spite of Philae’s CONSERT antenna ending up in an unfavourable configuration when it finally came to rest in Abydos, we still made successful operations, and made some interesting scientific discoveries. For example, the value of the dielectric constant derived from CONSERT data is very low and typical of an extremely porous medium. We could also infer that the upper part of the small lobe is fairly homogeneous, down to a scale of several metres.

Thanks to CONSERT data and improved comet shape models that have been produced since Philae’s landing by the OSIRIS team, we could also refine our estimate of where Philae could be. Now, Philae has been finally imaged on the surface and confirmed to be within the boundaries of our original prediction. Knowing the exact position and close environment of the lander, we will be able to start interpreting the amplitude of our signal data in addition to the radiowave pure travel time analysis.

CONSERT is an innovative instrument built especially for the Rosetta mission, to study the cometary interior. After the successful study of the interior of the comet, CONSERT-like radars are now being proposed for future small bodies missions such as AIM.

CONSERT-related stories featured on this blog
Inside Rosetta’s comet
Understanding Philae’s wake-up
Science on the surface of a comet
Rosetta and Philae status update
The quest to find Philae
Rosetta and Philae find comet not magnetised
Where is Philae? When will it wake up?
Did Philae graze a crater rim during its first bounce?
Homing in on Philae’s final landing site
How and where is Philae?
Three touchdowns for Rosetta’s lander