Beginning of the end

Far from going gently into that good night, the final weeks of Rosetta’s incredible journey are proving to be some of the most demanding for the mission control team at ESOC, ESA’s operations centre in Darmstadt, Germany. 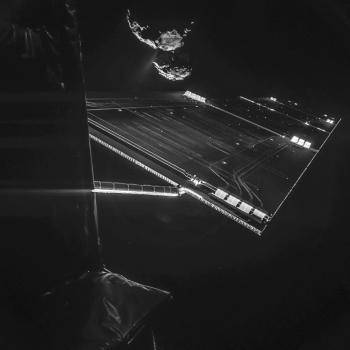 Rosetta’s 2014 selfie from a distance of about 16 km from the surface of 67P/C-G. Credits: ESA/Rosetta/Philae/CIVA

With the final descent profile and impact site selected (we’ll aim for Ma’at, an area containing several active ‘pits’ from where a number of the comet’s dust jets originate – see “Rosetta’s descent towards region of active pits”), and with the date and time for touch down set (planned for within 20 minutes of 10:40 UTC on 30 September, time at the comet – see footnote at the end of this post), the mission control team is now steering the craft through some of the most demanding manoeuvres since arrival at Comet 67P/C-G in August 2014.

Since 9 August 2016, Rosetta has been operating in a new ‘flyover regime’ that is taking the spacecraft as close as possible to the comet’s surface for a planned total of 15 very close flyovers, which are providing excellent opportunities for close-up science observations. To date, 13 close flyovers have been completed and two more (on Saturday, 17 September, and Tuesday, 20 September) are planned.

“On 5 September, we skimmed the comet just 3.9 km from its centre of mass, meaning we were about 1.9 km from the surface,” says Spacecraft Operations Manager Sylvain Lodiot.

“We gradually reduced the orbit pericentre – and hence the flyover distance – to 1.9 km; we were hoping to be able to reach 1 km from the surface in one of the next flyovers, which would offer even better opportunities for science.”

“However, navigating the spacecraft so low has been difficult and orbit determination tough. We are therefore back at 4.1 km from the comet centre [for the close flyovers]. Let’s see if we are able to go down a bit in the remaining flyovers!”

Navigating into the unknown

Flying so close to the comet means that, more so than ever, the comet’s irregular gravitational field cannot be ignored. For any orbits above approximately 7 km, models of the comet’s gravity enable Rosetta’s trajectory to be planned with exquisite accuracy – Rosetta can essentially be treated as orbiting an almost spherical body.

However, flying closer means that any anomaly in the comet’s gravitational field (think: mountains) must increasingly be taken into account. 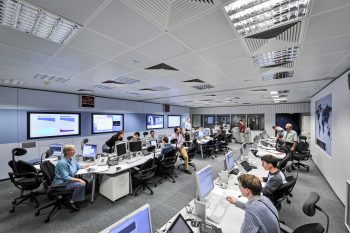 As the comet is shaped roughly like a rubber duck, its gravitational field as ‘felt’ by the craft when so close is by no means constant from one point on any given orbit to the next. As the craft has not previously operated so close to the surface, the gravitational models used by the Flight Dynamics teams at ESOC to plan the trajectory and the necessary thrusters burns are giving increasingly large uncertainties.

In the first week in September, Flight Dynamics were reporting that the error in pointing Rosetta (the craft’s pointing is vital as this determines instrument visibility of the comet and the direction for thrusters burns) was a whopping 8.0 degrees.

This is insignificant if you’re using your phone to navigate to the local coffee shop, but is very large when controlling a spacecraft just a few thousand metres from a comet.

“Basically, we were really struggling when we were so close to the comet. We’ve never been there before and we just don’t know the local gravitational field,” says Sylvain.

The now-famous ‘Philae found image’ is an example of unwanted off-pointing caused by gravitational disturbances. The image was meant to be centred on Philae’s deemed location, yet the lander actually appears at top-right, pushed to the side. The off-pointing is primarily due to the large gravitational disturbances with secondary effects from comet outgassing, among others.

The remaining three close flybys will be executed through a series of almost-daily orbit correction manoeuvres that will provide thrust on the order of just a few mm/second.

Planning on a tight cycle

The close flyby regime has meant the flight controllers have had to adopt a tightly timed, 3-day planning cycle (to match Rosetta’s comet orbital period), which has been especially demanding for the flight dynamics specialists, who are now essentially working 7 days/week.

Flight dynamics must gather the radiometric and optical data received from the ground tracking stations and the spacecraft, respectively, conduct a highly detailed and very accurate orbit determination, prepare the instructions for the resulting next set of manoeuvres and deliver these to the flight control team every three days. Then repeat.

In the final week of the mission, this will be tightened up to just two days.

By 26 September, with the close flyby phase complete, Rosetta will be commanded to arc out to an orbit 16 X 23 km from the comet centre, from where it will conduct the last thruster burn that will kick it onto the final descent.

The final weeks of the mission are also very intensive for the science ground segment (SGS) team at ESA’s ESAC Establishment near Madrid, home to Rosetta science operations.

The shorter, 3-day planning cycles have placed a large workload on the team as they interact with all instrument teams and the project scientist on a daily basis in order to extract the best science for the mission in these last few weeks.

The fact that the science planning needs to take into account the gradual reduction of available power (see ‘Powering down’ below) and the falling data download rate makes this even more challenging. The impact of the reduced power being provided by the solar panels means that there are times when not all instruments can remain on in full science mode. 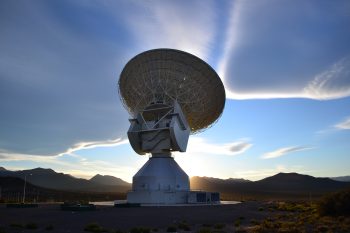 Similarly, as the spacecraft gets further from Earth, so the rate at which data can be downlinked via the ground stations is being reduced, and this causes the instrument teams to have to reduce the amount of data they generate to stay within the margins given to them.

Besides the planning of the weeks leading to the descent, the SGS team is now putting final touches on the preparation of the instrument science timeline to be executed during the final descent.

“This has proven to be highly challenging as not only are power issues at their most extreme in the final descent, but so, too, is the need to ensure that all science data generated are sent to ground in ‘real-time’ as contact will be lost with the spacecraft at touchdown,” says Laurence O’Rourke, SGS Science Operations Coordinator.

One example relates to planning for OSIRIS  images. With the final pointing strategy to be performed by the spacecraft having been agreed between the flight control team at ESOC and the OSIRIS instrument team, the science operations team is now working with the OSIRIS scientists to ensure they can provide the optimum timing of commands for their camera to match with this, in order to produce the best images feasible of the surface before contact. 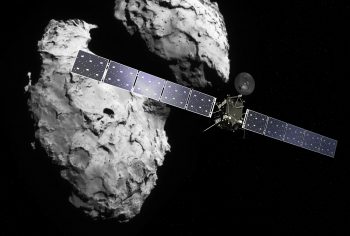 As the timeline for instrument activities during descent is almost ready, and the associated command sets for all instruments are in preparation, the Science Operations team are expected to deliver the final set of instrument commands for the mission to ESOC on 23 September. At that point, preparations begin for the post-operations phase, in which a reduced team from the SGS will continue to work on Rosetta data archiving.

More details on the final instrument timeline for the descent and the Science Operations team role in its creation, as well as in post-operations, will be provided in a blog post next week.

One of the major issues facing the mission control team in the final weeks is precisely one of the big reasons why the mission is ending now: power. The further from the Sun, the less sunlight that falls on Rosetta’s pair of 16-m-long solar arrays, and every day, this is falling. 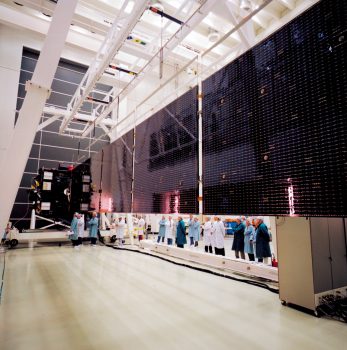 On 14 September, Rosetta was over 560 million km from the Sun and over 697 million km from Earth. Each day, these huge distances are increasing by around 1 million and 3 million km, respectively.

“On board Rosetta, we are seeing a reduction of 4 Watts of power each day. At the end of August, we were getting just 936 Watts, and we need a minimum of about 630 Watts simply to operate – this leaves about 300 for the instruments,” says Sylvain.

At ESOC, several members of the Rosetta flight control team have already been assigned entirely or partly to work on other missions. On the morning of 4 October, the next working day after mission end (3 October is a national holiday in Germany), all of the team will report for work on other missions and the Rosetta flight control team will formally dissolve.

Sylvain himself, as spacecraft operations manager, will continue working on Rosetta for a few more weeks, to write the post-mission report and arrange for the mission flight data to be transferred for long-term archiving at ESAC.

At ESOC, in addition to the 12 missions (18 spacecraft) currently in flight , teams are actively working on ten future missions, including Juice, BepiColombo and Solar Orbiter (see “Ground segment: preparing for launch”).

The intense operation activities at ESOC will continue until the very end.

At 20:50 UTC on 29 September, Rosetta will fire its thrusters for about three minutes – the ‘last burn’ – from an altitude of about 19 km, tipping itself onto the final descent trajectory. 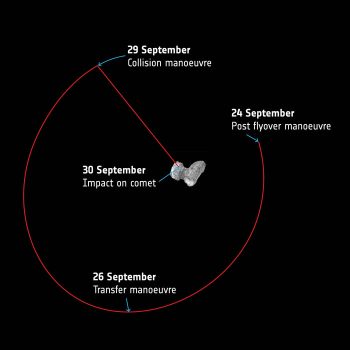 Rosetta’s last week at the comet. Click for full caption.

The on-board commands that will trigger ‘passivation’ upon impact will be activated around three hours before impact.

These will ensure that, as soon as Rosetta hits the surface, its main systems are turned off, including the attitude and control systems, as well as the main transmitter, the latter in order to meet regulations aimed at avoiding interference on deep space network communications channels.

Shortly after 08:00 UTC in the morning of 30 September, the final set of commands will be uploaded, transmitted via NASA’s 70m deep-space dish at Madrid. These will include an optimized pointing profile for the final descent  based on a final orbit determination done after the previous evening’s final burn.

The flight control team will be on duty in the Main Control Room at ESOC on 30 September, monitoring the craft’s final hours and helping ensure receipt of the last data sets from the instruments as the comet looms steadily closer.

Impact is expected to occur on 30 September at 10:40 UTC at the comet, with an estimated error of ± 20 minutes.

As the signal travel time between Comet 67P/C-G and Earth on that day will be 40 minutes, confirmation of impact is expected at ESOC at 11:20 UTC / 13:20 CEST, again with an estimated error of ± 20 minutes. This uncertainty will be reduced as the end of the mission approaches (all times are subject to change).

As soon as Rosetta hits the surface, the craft will be passivated, autonomously on board… And that will be the end of the Rosetta mission.

ESA’s Rosetta spacecraft is set to complete its incredible mission in a controlled descent to the surface of Comet 67P/C-G on 30 September. Join mission experts on 19 September, 1200 GMT / 1400 CEST to discuss Rosetta’s final days and hours of operation, including expectations for the images and other scientific data that will be collected as the spacecraft gets closer and closer to the surface. We’ll also discuss the exciting discovery of Philae that was made earlier this month.