This week’s CometWatch entry was taken with Rosetta’s NAVCAM on 17 August 2016, when the spacecraft was 13.9 km from the nucleus of Comet 67P/Churyumov-Gerasimenko. 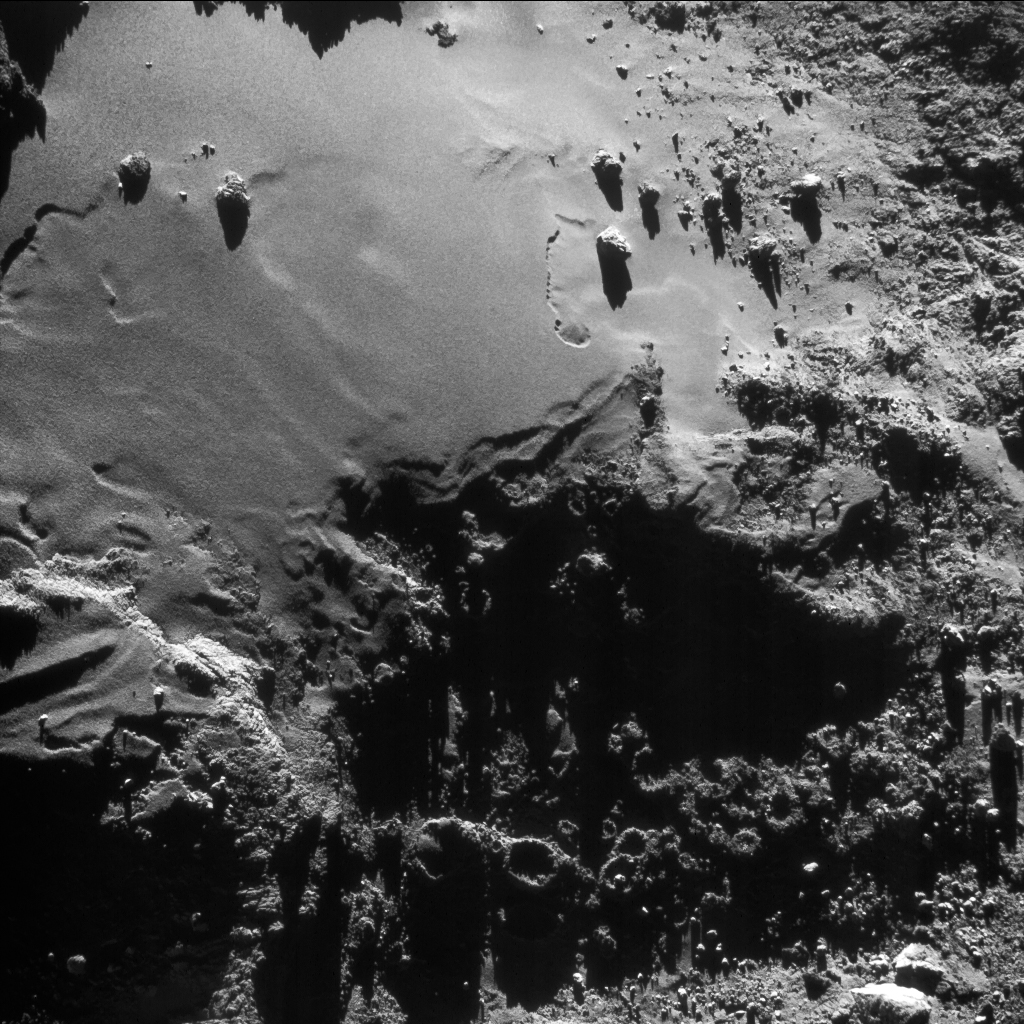 This close-up view shows a portion of the Imhotep region, on the large comet lobe.

The top part of the image portrays the flat, smooth-covered portion of Imhotep, scattered with a variety of boulders of different sizes. Towards the top right is a cluster of three large boulders, including the 45-m sized Cheops, named after the Great Pyramid at Giza near Cairo in Egypt.

Around the comet’s perihelion, Rosetta observed many spectacular changes on this portion of Imhotep (see blog post ‘Comet surface changes before Rosetta’s eyes‘).

To have an idea of the surface changes, you can compare the new CometWatch with a number of images of the same region taken in the past months by Rosetta: from early images such as CometWatch 26 October 2014 and the close fly-by of 14 February 2015 to more recent ones, for example this OSIRIS wide-angle camera image taken on 25 May 2016.

In the lower part of today’s image, a number of circular features are visible, many of which appear to be stacked on top of one another. These roundish features can also be seen, under a different perspective, in an OSIRIS narrow-angle camera image from 16 July 2016.

A view of the Imhotep region in the overall context of Comet 67P/C-G is provided in a recent OSIRIS wide-angle camera image, taken on 10 August 2016, and you can find more details about the various geological aspects of this region in the blog post ‘Inside Imhotep‘.

Meanwhile, the OSIRIS team have published a number of striking new views of the comet via their image of the day website.

An OSIRIS wide-angle camera image captured less than 7 km from the comet centre on 15 August depicts portions of both lobes of 67P/C-G. The steep cliffs of the small lobe Hathor region are visible on the right, declining towards the neck, which is hidden from sight in this view by the dust-covered terrains of Ash, visible on the right. 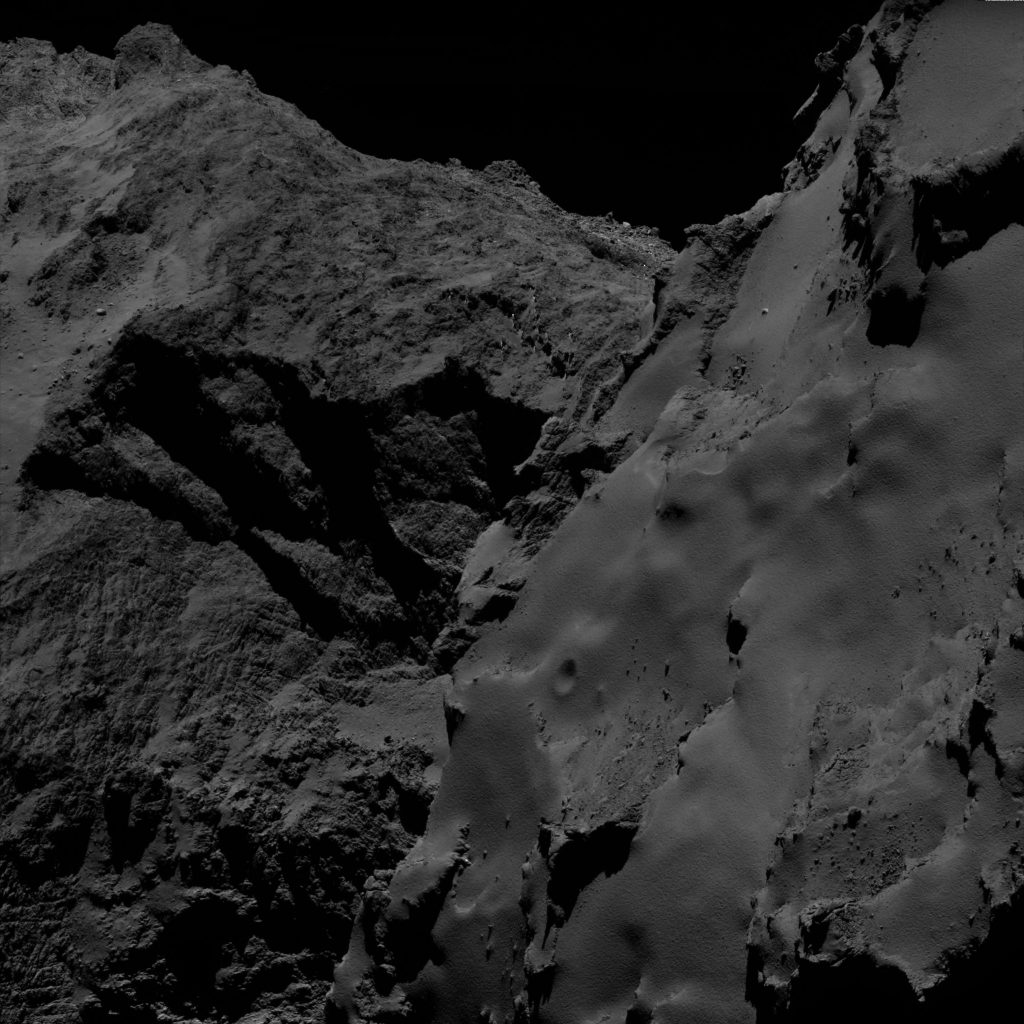 OSIRIS wide-angle camera image taken on 15 August 2016, when Rosetta was 6.8 km from Comet 67P/C-G. The scale is 0.59 m/pixel and the image measures about 1.2 km across. Credits: ESA/Rosetta/MPS for OSIRIS Team MPS/UPD/LAM/IAA/SSO/INTA/UPM/DASP/IDA

The small, roundish feature visible in the lower part of this image was described the only unambiguously identified impact crater on the comet surface in a paper by N. Thomas et al. (part of the Science special issue: Catching a Comet, 2015). About 35 m in diameter, the crater appears to have been partially buried by the smooth material that covers the Ash region.

Another image, taken with the OSIRIS narrow-angle camera about 6 km from the comet centre on 18 August, depicts in extraordinary detail some of the boulders on a different portion of the Ash region. 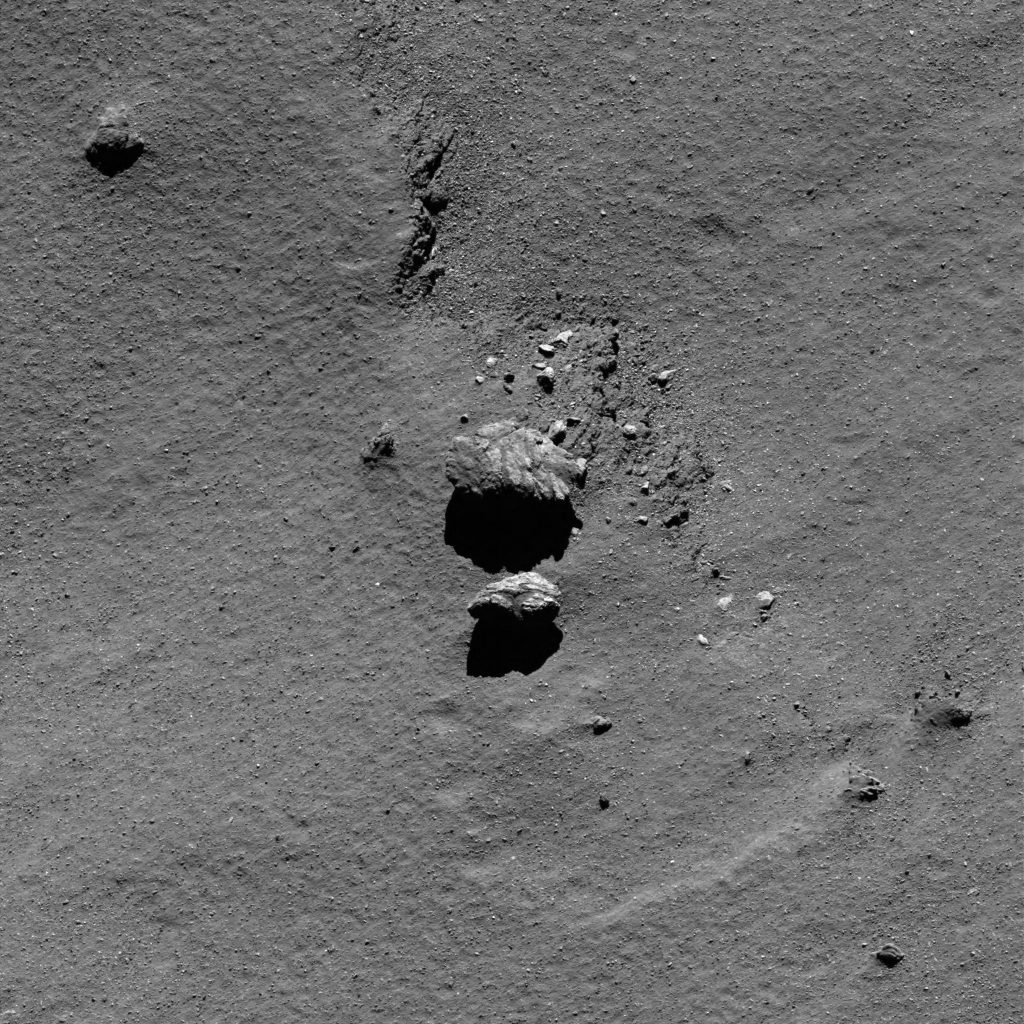 OSIRIS narrow-angle camera image taken on 25 May 2016, when Rosetta was 6.1 km from Comet 67P/C-G. The scale is 0.11 m/pixel and the image measures about 225 m across. Credits: ESA/Rosetta/MPS for OSIRIS Team MPS/UPD/LAM/IAA/SSO/INTA/UPM/DASP/IDA

You can try and find these boulders in another recent OSIRIS image (second from top in this post), which portrays Ash in a broader context – including the above mentioned crater.

Another stunningly detailed OSIRIS narrow-angle camera image, taken only a couple of days ago, on 24 August, reveals the rough texture of the Khonsu region (left and lower part of the image) next to the slopes that separate it from Atum, a portion of which is visible in the top right corner. A recent NAVCAM image taken on 8 August 2016 presents a broader view on this region. 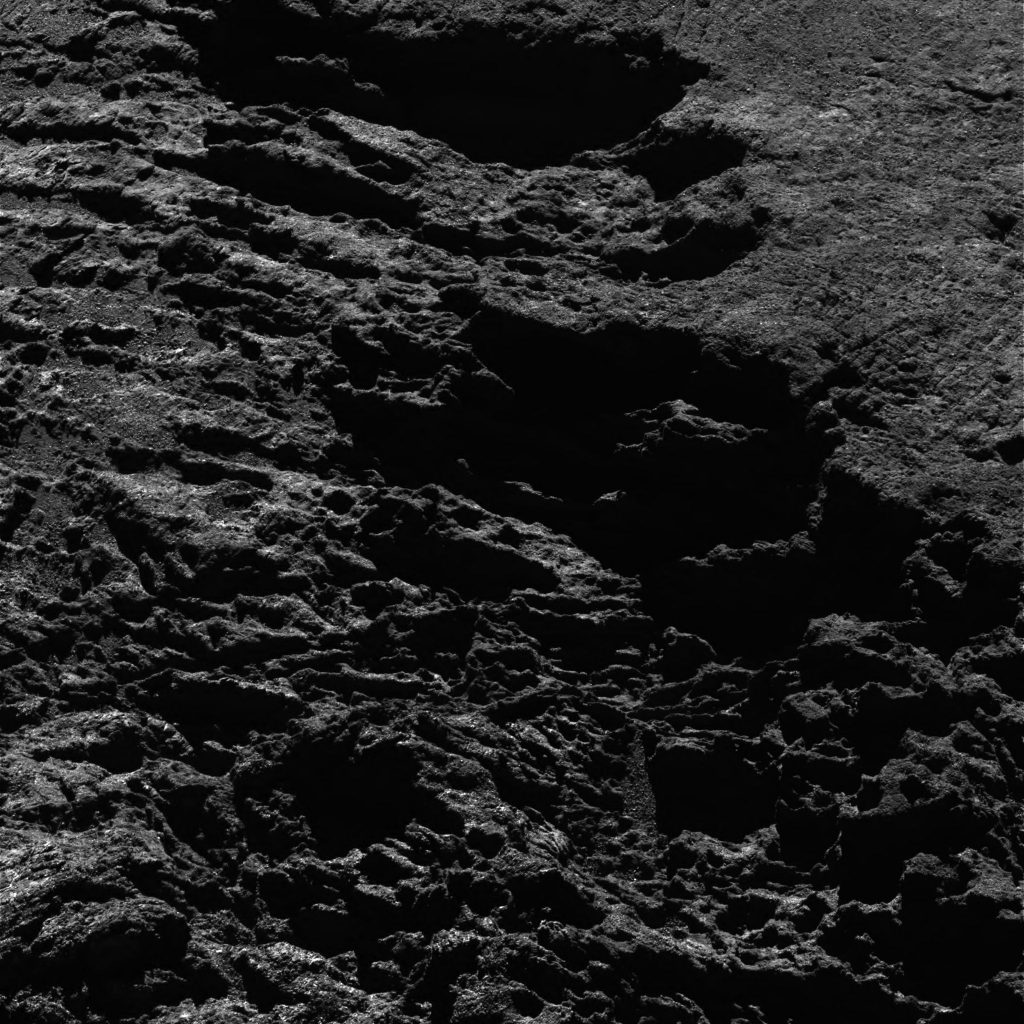 OSIRIS narrow-angle camera image taken on 24 August 2016, when Rosetta was 9.3 km from Comet 67P/C-G. The scale is 0.16 m/pixel and the image measures about 330 m across. Credits: ESA/Rosetta/MPS for OSIRIS Team MPS/UPD/LAM/IAA/SSO/INTA/UPM/DASP/IDA

This week’s original NAVCAM image is provided below.