Today’s CometWatch entry, also featured as ESA Space Science Image of the Week, is an image of Comet 67P/Churyumov-Gerasimenko taken with Rosetta’s navigation camera (NAVCAM) on 30 June 2016, from a distance of 25.8 km. 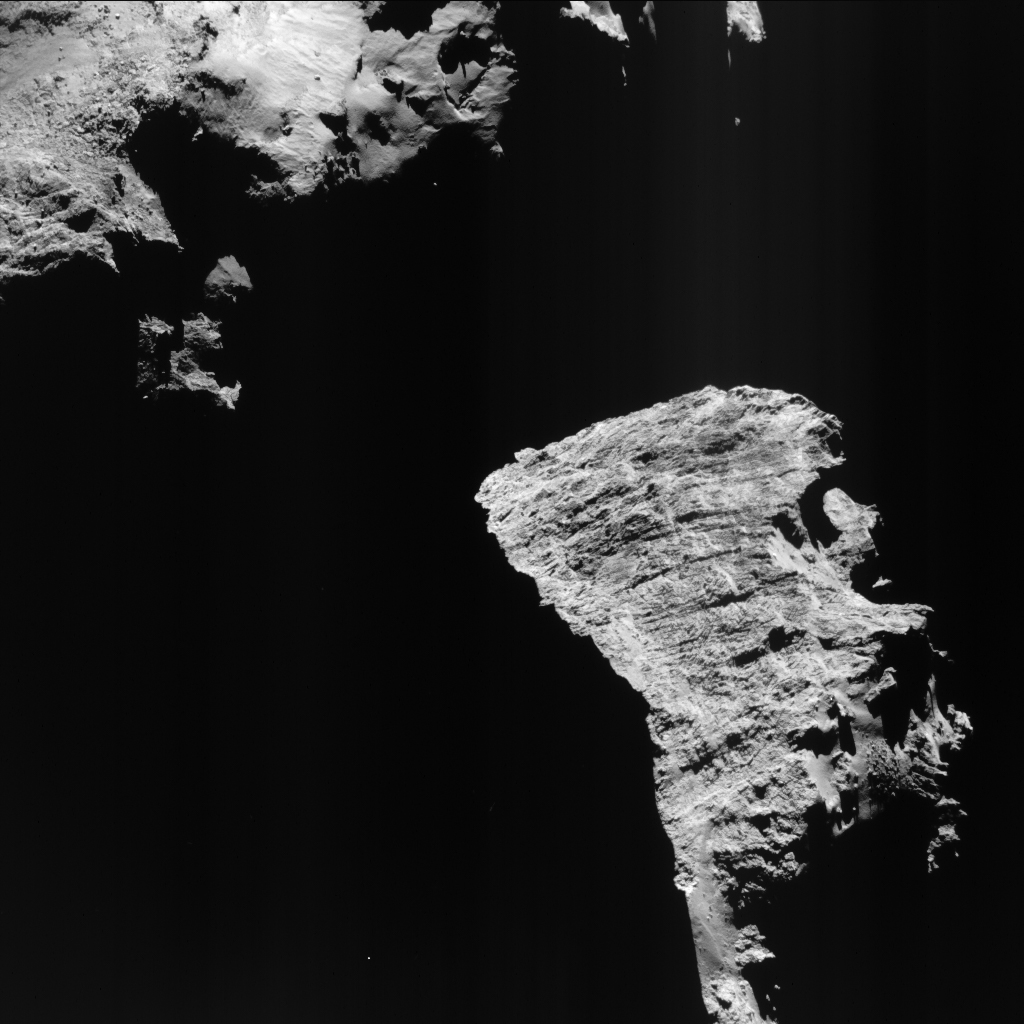 Enhanced NAVCAM image of Comet 67P/C-G taken on 30 June 2016, 25.8 km from the nucleus. The scale is 2.2 m/pixel and the image measures 2.3 km across. The faint vertical striping effect is an image artifact. Credits: ESA/Rosetta/NAVCAM – CC BY-SA IGO 3.0

Depicted in the lower right part of the image is the region Hathor, a very intriguing portion of the small comet lobe, where the head declines steeply towards the neck and body of the comet.

This view shows a good fraction of the 900-m high cliff that forms Hathor, with marked linear features crossing the region from left to right. Perpendicular to these, additional streaks and even small terraces can be seen. Beyond the cliff of Hathor, on the right, are hints of the Ma’at region.

In the upper right corner, smoother patches of the large comet lobe are visible, covered in dust and boulders. The large lobe casts its shadow on the comet’s neck, which separates the two lobes and is hidden from view in this image.

Meanwhile, Rosetta’s OSIRIS wide-angle camera obtained this stunning image of a different portion of the comet on 2 July, when the spacecraft was 14.5 km from the nucleus. 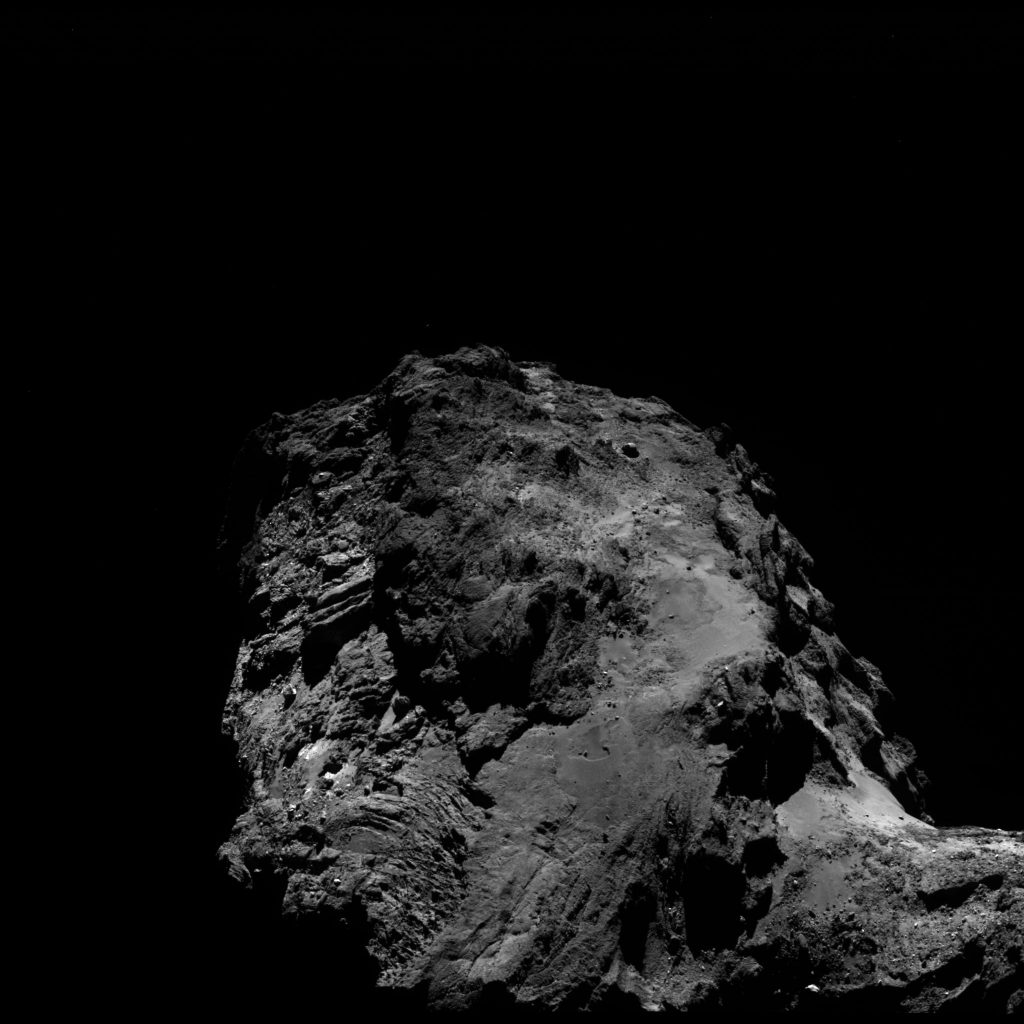 OSIRIS wide-angle camera image taken on 2 July 2016, when Rosetta was 14.5 km from Comet 67P/C-G. The scale is 1.38 m/pixel and the image measures about 2.8 km. Credits: ESA/Rosetta/MPS for OSIRIS Team MPS/UPD/LAM/IAA/SSO/INTA/UPM/DASP/IDA

The image shows most of the large comet lobe, with the Khonsu, Atum and Anubis regions well in sight, from left to right, and hints of Seth towards the right edge. In the lower right corner, the smooth region of Hapi is visible, on the neck, leading towards the rougher Anuket.

Another striking image, featuring smooth-covered terrains in the Babi region, on the large comet lobe, was taken with the OSIRIS narrow-angle camera on 3 July, when Rosetta was about 11 km from the nucleus. 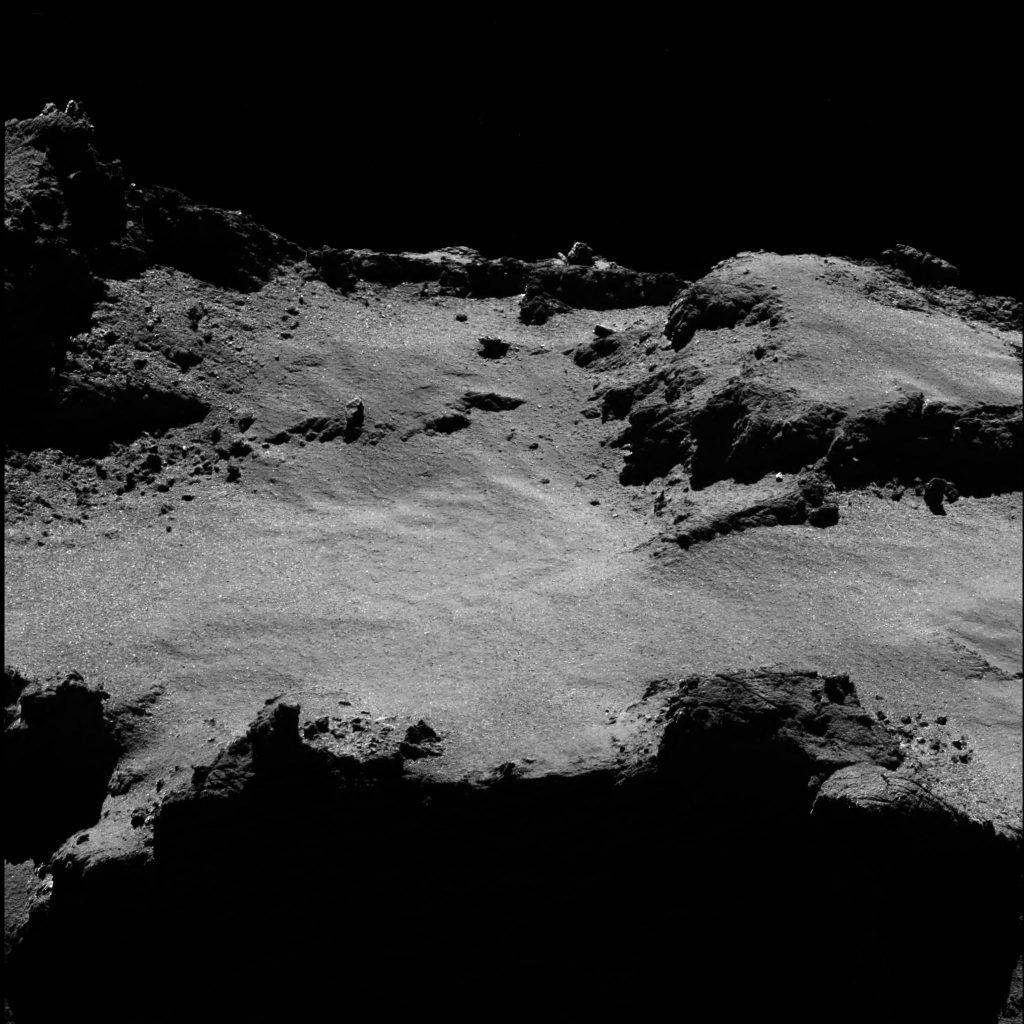 OSIRIS narrow-angle camera image taken on 3 July 2016, when Rosetta was 11.2 km from Comet 67P/C-G. The scale is 0.20 m/pixel and the image measures about 410 m. Credits: ESA/Rosetta/MPS for OSIRIS Team MPS/UPD/LAM/IAA/SSO/INTA/UPM/DASP/IDA

Currently, Rosetta is on a 27 km x 9 km elliptical orbit around the nucleus; this weekend, it will move to a less eccentric, 9 km x 10 km orbit, ahead of entering the end-of-mission orbit. The mission will continue its close-up investigation of the comet environment until the grand finale, a controlled descent of the spacecraft to the surface of the comet on 30 September. 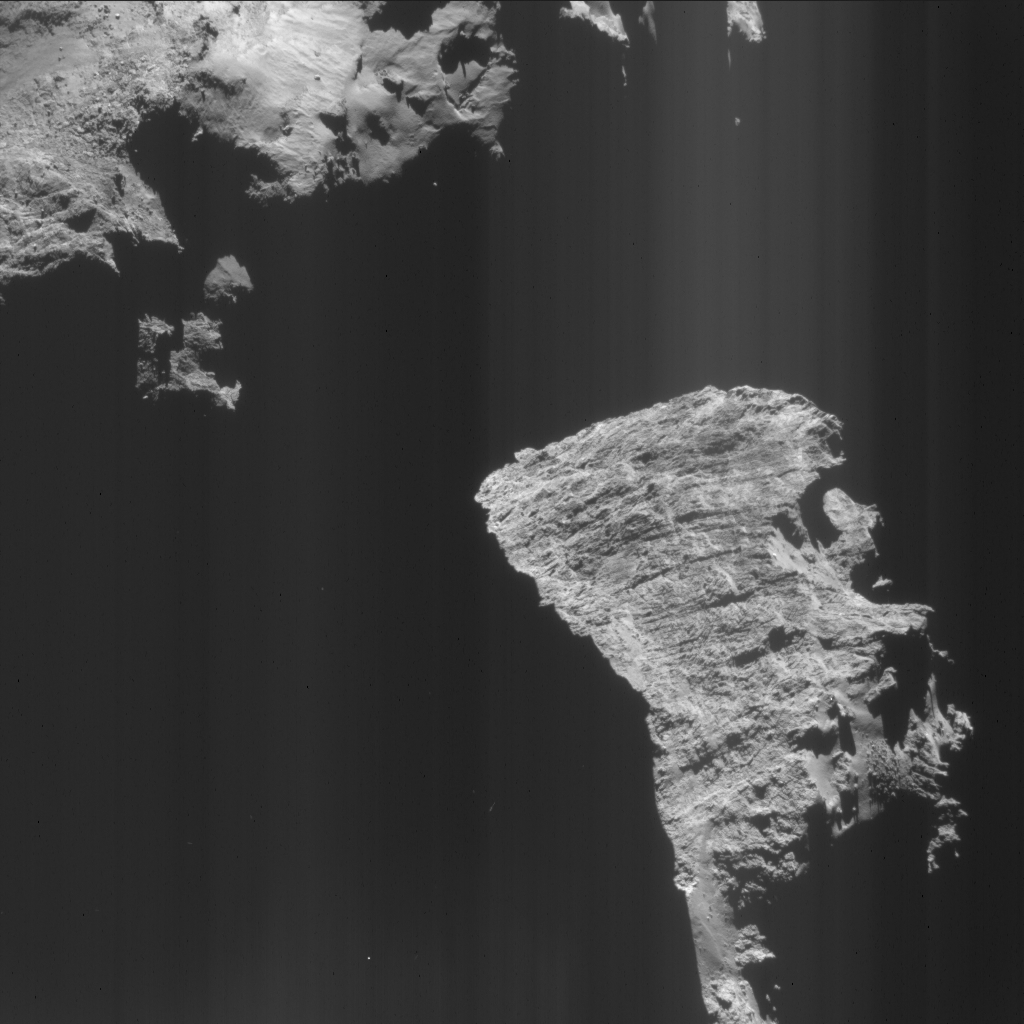