This article is mirrored from the ESA Web Portal. 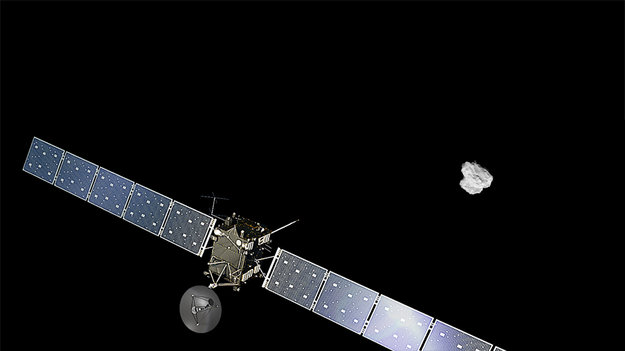 Rosetta is set to complete its mission in a controlled descent to the surface of its comet on 30 September.

The mission is coming to an end as a result of the spacecraft’s ever-increasing distance from the Sun and Earth. It is heading out towards the orbit of Jupiter, resulting in significantly reduced solar power to operate the craft and its instruments, and a reduction in bandwidth available to downlink scientific data.

Combined with an ageing spacecraft and payload that have endured the harsh environment of space for over 12 years – not least two years close to a dusty comet – this means that Rosetta is reaching the end of its natural life. 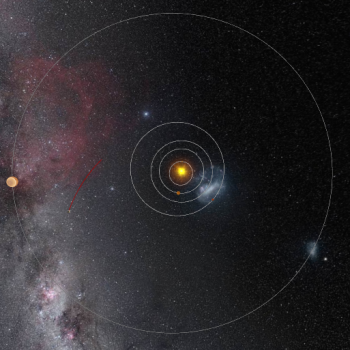 Where is Rosetta on 30 September?

Unlike in 2011, when Rosetta was put into a 31-month hibernation for the most distant part of its journey, this time it is riding alongside the comet. Comet 67P/Churyumov-Gerasimenko’s maximum distance from the Sun (over 850 million km) is more than Rosetta has ever journeyed before. The result is that there is not enough power at its most distant point to guarantee that Rosetta’s heaters would be able to keep it warm enough to survive.

Instead of risking a much longer hibernation that is unlikely to be survivable, and after consultation with Rosetta’s science team in 2014, it was decided that Rosetta would follow its lander Philae down onto the comet.

The final hours of descent will enable Rosetta to make many once-in-a-lifetime measurements, including very-high-resolution imaging, boosting Rosetta’s science return with precious close-up data achievable only through such a unique conclusion.

Communications will cease, however, once the orbiter reaches the surface, and its operations will then end. 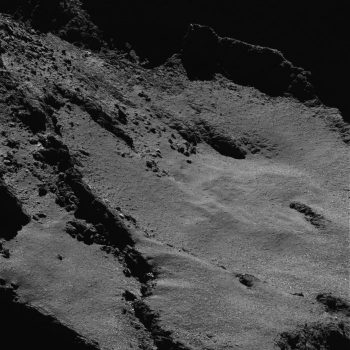 During Rosetta’s final descent, the spacecraft will image the comet’s surface in high resolution from just a few hundred metres. This OSIRIS narrow-angle camera image was taken on 28 May 2016, when the spacecraft was about 5 km from the surface of Comet 67P/Churyumov–Gerasimenko. The scale is 0.13 m/pixel.
ESA/Rosetta/MPS for OSIRIS Team MPS/UPD/LAM/IAA/SSO/INTA/UPM/DASP/IDA

“We’re trying to squeeze as many observations in as possible before we run out of solar power,” says Matt Taylor, ESA Rosetta project scientist. “30 September will mark the end of spacecraft operations, but the beginning of the phase where the full focus of the teams will be on science. That is what the Rosetta mission was launched for and we have years of work ahead of us, thoroughly analysing its data.”

Rosetta’s operators will begin changing the trajectory in August ahead of the grand finale such that a series of elliptical orbits will take it progressively nearer to the comet at its closest point.

“Planning this phase is in fact far more complex than it was for Philae’s landing,” says Sylvain Lodiot, ESA Rosetta spacecraft operations manager. “The last six weeks will be particularly challenging as we fly eccentric orbits around the comet – in many ways this will be even riskier than the final descent itself.

“The closer we get to the comet, the more influence its non-uniform gravity will have, requiring us to have more control on the trajectory, and therefore more manoeuvres – our planning cycles will have to be executed on much shorter timescales.”

A number of dedicated manoeuvres in the closing days of the mission will conclude with one final trajectory change at a distance of around 20 km about 12 hours before impact, to put the spacecraft on its final descent.

The region to be targeted for Rosetta’s impact is still under discussion, as spacecraft operators and scientists examine the various trade-offs involved, with several different trajectories being examined.

Broadly speaking, however, it is expected that impact will take place at about 50 cm/s, roughly half the landing speed of Philae in November 2014.

Commands uploaded in the days before will automatically ensure that the transmitter as well as all attitude and orbit control units and instruments are switched off upon impact, to fulfill spacecraft disposal requirements. 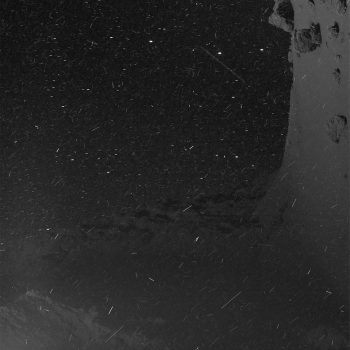 Rosetta faces a dusty environment like this every day at Comet 67P/Churyumov–Gerasimenko. Credits: ESA/Rosetta/MPS for OSIRIS Team MPS/UPD/LAM/IAA/SSO/INTA/UPM/DASP/IDA

In any case, Rosetta’s high-gain antenna will very likely no longer be pointing towards Earth following impact, making any potential communications virtually impossible.

In the meantime, science will continue as normal, although there are still many risks ahead. Last month, the spacecraft experienced a ‘safe mode’ while only 5 km from the comet as a result of dust confusing the navigation system. Rosetta recovered, but the mission team cannot rule out this happening again before the planned end of the mission.

“Although we’ll do the best job possible to keep Rosetta safe until then, we know from our experience of nearly two years at the comet that things may not go quite as we plan and, as always, we have to be prepared for the unexpected,” cautions Patrick Martin, ESA Rosetta’s mission manager.

“This is the ultimate challenge for our teams and for our spacecraft, and it will be a very fitting way to end the incredible and successful Rosetta mission.”

Details regarding the end of mission scenario are subject to change. Further information will be announced once available.

Background information on ending Rosetta’s mission on the comet was published on the blog last year.