This week’s CometWatch entry from Rosetta’s NAVCAM was taken on 15 May 2016 when the spacecraft was 9.88 km from Comet 67P/Churyumov-Gerasimenko. 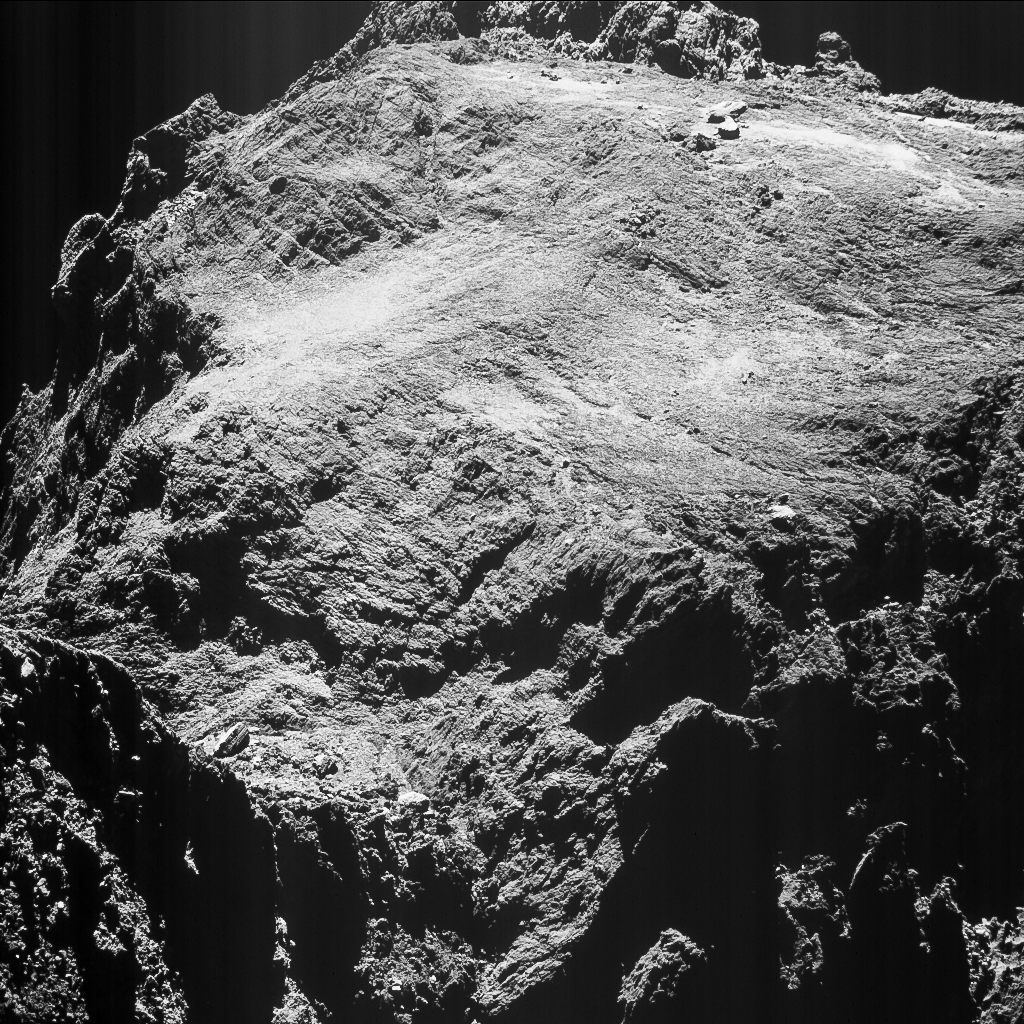 This impressive close-up captures the relatively flat regions of Aker and Khepry on the comet’s large lobe. These regions are characterised by distinctive layers and in places cross-cutting fracture lines – these are particularly visible in the exposed faces at the top left. A number of large boulders can also be seen sitting within an island of smoother terrain towards the top of the view.

The small comet lobe lies to the bottom left of this view with the ridge-like feature separating Sobek (foreground) from Bastet (behind and out of view). A small portion of boulder-strewn Hapi can also be seen at the foothill of Aker. The largely shadowed region to the lower right marks the transition to Anhur.

With Rosetta currently at these close distances the OSIRIS cameras are also capturing stunning details of the comet. 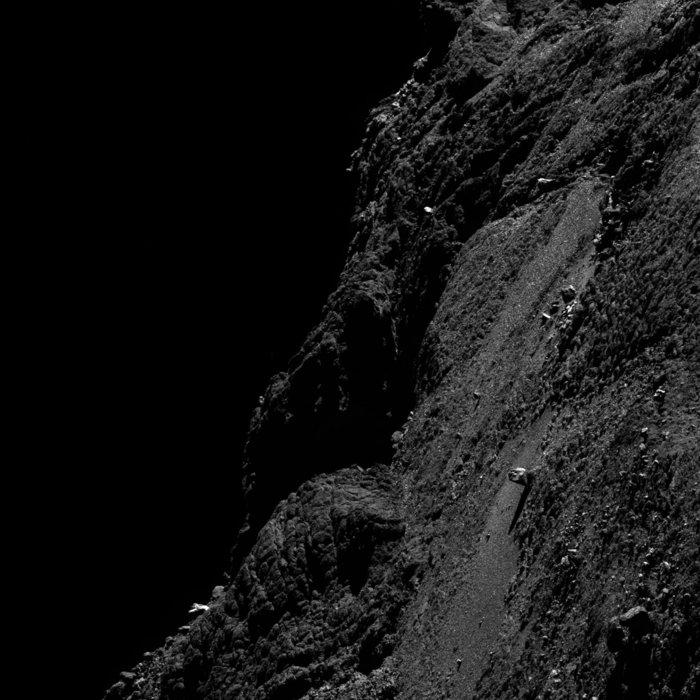 OSIRIS narrow-angle camera image taken on 11 May 2016, when Rosetta was 9.97 km from Comet 67P/Churyumov–Gerasimenko. The scale is 0.16 m/pixel. Credits: ESA/Rosetta/MPS for OSIRIS Team MPS/UPD/LAM/IAA/SSO/INTA/UPM/DASP/IDA

The image above shows fracture patterns similar to those seen in this week’s NAVCAM entry, but on the comet’s small lobe, in the Wosret region.

Two additional views released this week capture parts of the Imhotep region on the large lobe. 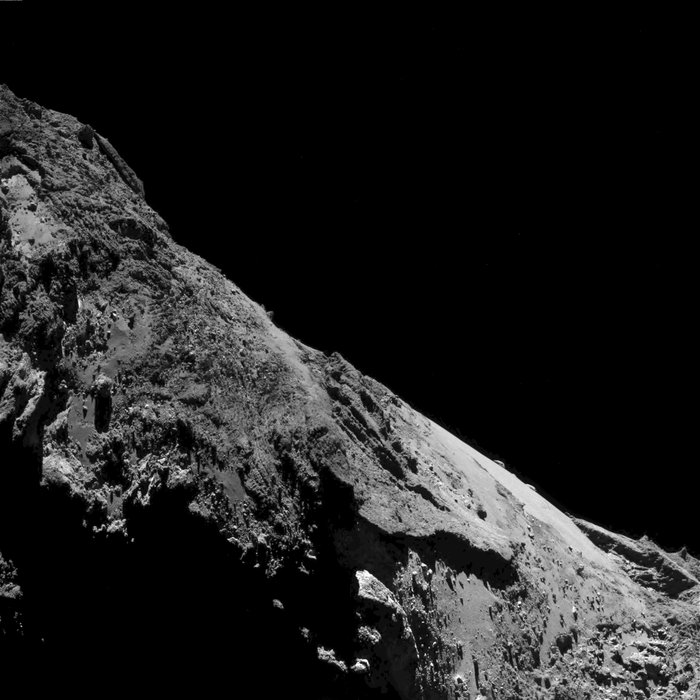 OSIRIS wide-angle camera image taken on 17 May 2016, when Rosetta was 9.4 km from Comet 67P/Churyumov–Gerasimenko. The scale is 0.89 m/pixel. Credit: ESA/Rosetta/MPS for OSIRIS Team MPS/UPD/LAM/IAA/SSO/INTA/UPM/DASP/IDA

The beautiful oblique view (above) shows the wider region – and was imaged by the wide-angle camera – while the close-up (below) was taken by the narrow-angle camera.

OSIRIS narrow-angle camera image taken on 11 May 2016, when Rosetta was 9.9 km from Comet 67P/Churyumov–Gerasimenko. The scale is 0.16 m/pixel. Credit: ESA/Rosetta/MPS for OSIRIS Team MPS/UPD/LAM/IAA/SSO/INTA/UPM/DASP/IDA

The close-up captures boulders of a range of sizes, likely associated with erosion from the surrounding slopes. The transition from these eroded regions on the outskirts of Imhotep to the central smoother plains is nicely highlighted in this scene.

The original NAVCAM from today’s release is provided below: 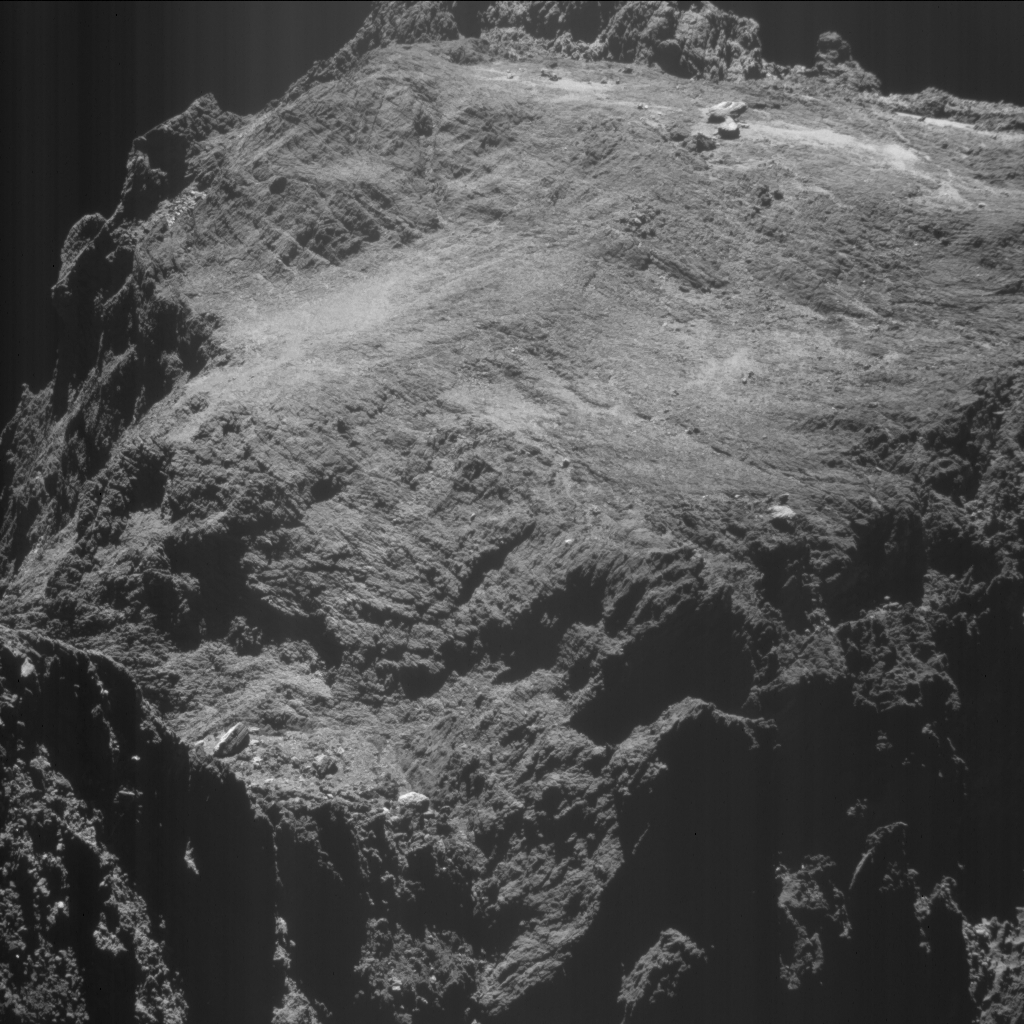