This story is mirrored from the ESA web portal, esa.int.

Rosetta’s comet has been seen changing colour and brightness in front of the ESA orbiter’s eyes, as the Sun’s heat strips away the older surface to reveal fresher material.

Rosetta’s Visible and InfraRed Thermal Imaging Spectrometer, VIRTIS, began to detect these changes in the sunlit parts of Comet 67P/Churyumov–Gerasimenko – mostly the northern hemisphere and equatorial regions – in the months immediately following the spacecraft’s arrival in August 2014.

A new paper, published in the journal Icarus, reports on the early findings of this study, up to November 2014, during which time Rosetta was operating between 100 km to within 10 km of the comet nucleus. At the same time, the comet itself moved along its orbit closer to the Sun, from about 542 million km to 438 million km. 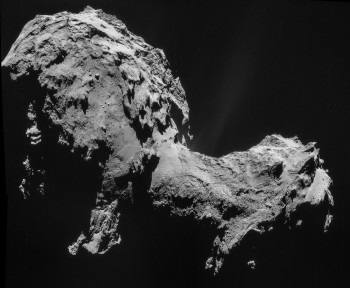 VIRTIS monitored the changes in light reflected from the surface over a wide range of visible and infrared wavelengths, as an indicator of subtle changes in the composition of the comet’s outermost layer.

When it arrived, Rosetta found an extremely dark body, reflecting about 6% of the visible light falling on it. This is because the majority of the surface is covered with a layer of dark, dry, dust made out of mixture of minerals and organics.

Some surfaces are slightly brighter, some slightly darker, indicating differences in composition. Most of the surface is slightly reddened by organic-rich material, while the occasional ice-rich material shows up as somewhat bluer. 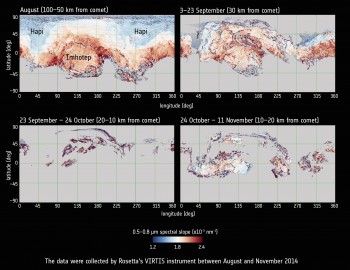 Even when Rosetta first rendezvoused with the comet far from the Sun, ices hidden below the surface were being gently warmed, sublimating into gas, and escaping, lifting some of the surface dust away and contributing to the comet’s coma and tail.

VIRTIS shows that as the ‘old’ dust layers were slowly ejected, fresher material was gradually exposed. This new surface was both more reflective, making the comet brighter, and richer in ice, resulting in bluer measurements.

On average, the comet’s brightness changed by about 34%. In the Imhotep region, it increased from 6.4% to 9.7% over the three months of observations. 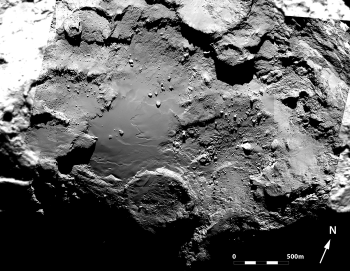 “The overall trend seems to be that there is an increasing water-ice abundance in the comet’s surface layers that results in a change in the observed spectral signatures. In that respect, it’s like the comet is changing colour in front of our eyes,” says Gianrico Filacchione, lead author of the study.

“This evolution is a direct consequence of the activity occurring on and immediately beneath the comet’s surface. The partial removal of the dust layer caused by the start of gaseous activity is the probable cause of the increasing abundance of water ice at the surface.”

“The surface properties are really dynamic, changing with the distance from the Sun and with the levels of comet activity,” adds Fabrizio Capaccioni, VIRTIS principal investigator.

“We’ve started analysing the subsequent datasets and can already see that the trend continues in the observations made beyond November 2014.”

“The evolution of surface properties with activity has never been observed by a cometary mission before and is a major science objective of the Rosetta mission,” says Matt Taylor, ESA’s Rosetta Project Scientist.

“It is great to see science papers being published directly addressing this topic and we’re looking forward to seeing how things have changed over the entire mission.”

A follow-up paper is in preparation covering the period November 2014 to May 2015.