Getting to know the comet’s southern hemisphere

Now that Rosetta has been able to safely approach Comet67P/Churyumov-Gerasimenko again following the active months around perihelion last August, scientists have been able to better image the southern hemisphere regions of the comet. This week the spacecraft is around 35 km distance from the nucleus, meaning that the OSIRIS narrow-angle camera can image the comet’s surface with a resolution of around 80 cm/pixel.

This has allowed OSIRIS scientists to update their maps of previously undefined regions on the comet. Three new regions have been defined in recent months: Bes, Geb and Neith. 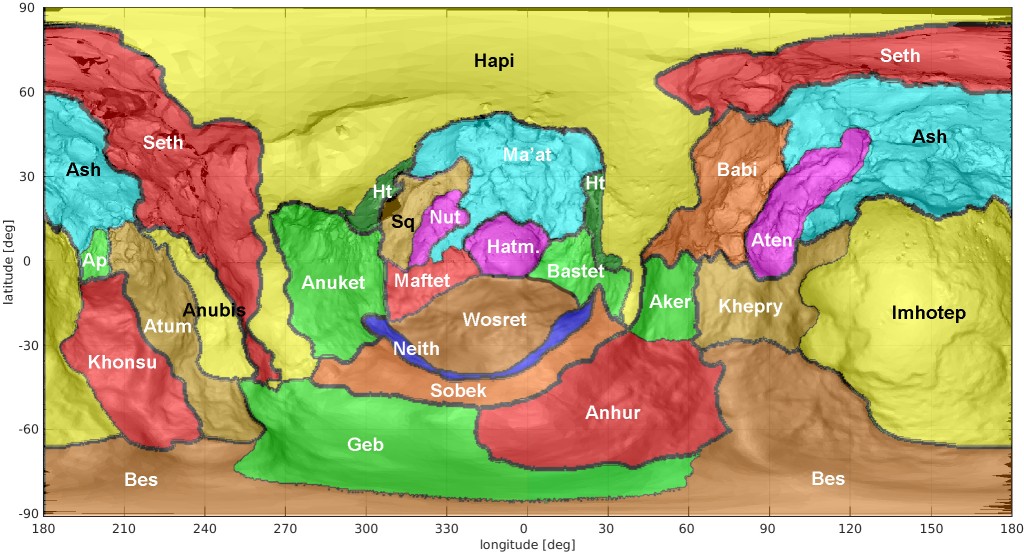 Following the naming conventions of the other 23 regions, these too take the names of Egyptian deities.

“The southern hemisphere looks ‘flattened out’ in comparison to the north yet we can still see large cliffs in the south and these include the Neith region on the small lobe (mirroring Hathor in the north), and Geb and Anhur on the large lobe (mirroring Seth).”

Ramy notes that there are seven regions defined in the south compared to 19 in the north. 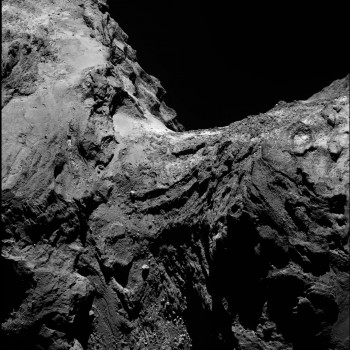 OSIRIS narrow-angle camera image taken on 30 January 2016 from a distance of 62 km. The image scale is 1.1 m/pixel. Credits: ESA/Rosetta/MPS for OSIRIS Team MPS/UPD/LAM/IAA/SSO/INTA/UPM/DASP/IDA

“We observe less variation in the southern hemisphere due to the lack of smooth deposits, dust cover and large depressions there,” he says. “In this regards, there are two important benefits: the first is that we can study the actual surface of the nucleus in more detail without the dust cover, and secondly, we have less names to memorise!”

The team need more images at high resolution of the southern hemisphere regions in particular before finalising a more detailed map with exact boundaries between the geomorphologically distinct regions.

While this work is ongoing, this interim map provides a useful guide to support many of the new images published via the OSIRIS image of the day website that show these regions.

For example, in the image shown above, the familiar smooth ‘neck’ region defining Hapi is seen close to the top of the image with small portions of Seth, Anubis and Atum to the top left. In the foreground, ‘below’ Hapi, Geb dominates, with a portion of Bes to the left. On the neck, Geb transitions into Sobek, before encountering Neith and then Wosret to the far right. 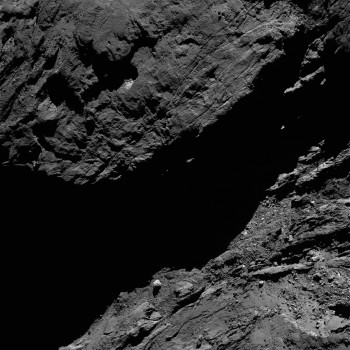 OSIRIS narrow-angle camera image taken on 7 February 2016 from a distance of 47.5 km. The image scale is 0.86 m/pixel. Credits: ESA/Rosetta/MPS for OSIRIS Team MPS/UPD/LAM/IAA/SSO/INTA/UPM/DASP/IDA

In the second example, right, Wosret is seen at the top of the image, with Anhur to the right in the lower part. Anhur transitions into Geb towards the lower left, while Sobek is in the shadowed portion of the comet in this view.

Bookmark the OSIRIS image of the day archive  for more great new views as Rosetta continues to approach the comet.