This blog post is based on an image release published on the ESA Space Science portal . 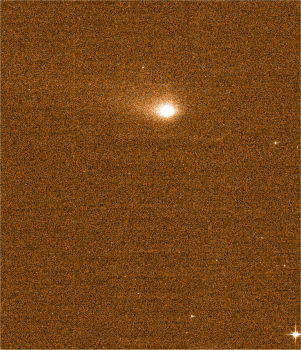 Located at the Lagrange point L2, 1.5 million km away from Earth in the opposite direction from the Sun, Gaia scans the entire sky about every three months to map the positions and motions of a billion stars in our Galaxy. In the process, the satellite also picks up objects much closer to home, such as asteroids and comets in the solar system, gathering data that will be used to determine their orbits to unprecedented accuracy.

Gaia is optimised to detect stars, which appear as point sources in its camera, and measure their properties, but it does not routinely return images of celestial objects. To acquire an image of a particular object, a special trick can be used. This is what Gaia astronomers did to ensure that, when the satellite scanned the patch of the sky including Rosetta’s comet, the star-mapper camera would capture an image of this iconic object.

“Comet 67P/C-G had just passed its perihelion on 13 August, and calculations predicted that the patch of the sky containing the comet and Rosetta would be scanned by Gaia on 14 September,” comments Fred Jansen, Gaia mission manager and former Rosetta mission manager.

Artist’s impression of the Gaia spacecraft, with the Milky Way in the background. Credit: ESA/ATG medialab; background image: ESO/S. Brunier

“It was a remarkable occasion: Gaia and Rosetta, two ESA science missions separated by over 260 million kilometres, one looking at the other and its object of study.”

For this special occasion, the astronomers made sure that Gaia’s star-mapper camera would cover that patch of the sky using a special mode in which a full image is recorded and transmitted to the ground instead of point sources only, as in Gaia’s normal science mode.

“This symbolic image has a special value for me: it’s my present looking at my past,” adds Jansen.

Pictured in the image are the comet’s coma and tail, while the nucleus and Rosetta, which was some 300 km from the surface at the time, are both hidden in the innermost pixel. A number of background stars are also sprinkled around the image, which measures about 4.5 arc minutes across.

The image scale, 0.35 arc seconds per pixel, is roughly similar to that of an image of a ground-based image of 67P/C-G that was recently obtained with the 2-m Liverpool Telescope at La Palma, in the Canary Islands.

Besides the special observing mode that was used to obtain the image, the comet was also caught by the on-board detection software as a ‘suspected moving object’. Over the three-second observation time, it appeared to move by some 100 km with respect to the background stars, as seen from a distance of about 260 million kilometres.

Over its five-year long mission, Gaia will observe hundreds of comets and repeatedly measure their position to unprecedented accuracy. These data will allow scientists to improve the orbit determination of many comets well beyond the precision that can be achieved with ground-based observations alone; in addition, they will also use Gaia’s photometric observations of these comets to investigate their composition and surface properties.

“This is the latest in a succession of Rosetta combinations with data from other ESA missions, including Cluster, Mars Express and also the Earth Observation satellite ENVISAT,” says Matt Taylor, ESA Rosetta project scientist.