OSIRIS scientists have created a spectacular anaglyph view of a jet seen blasting from the nucleus of Comet 67P/Churyumov-Gerasimenko in August.

Rosetta observed increased levels of cometary activity in the weeks around perihelion as the comet made its closest approach to the Sun along its orbit, at a distance of about 186 million km – between the orbits of Earth and Mars. On the approach, the increasing solar radiation heated up the comet’s nucleus, causing its frozen ices to escape as gas and stream out into space at an ever-greater rate, dragging the comet’s dust with it.

A period of peak of activity, where distinct jets increase in number and intensity, is thus expected in the weeks around perihelion. The jet shown here is one such example of the high level of activity seen over the last months; it was witnessed on 12 August, just one day before perihelion. 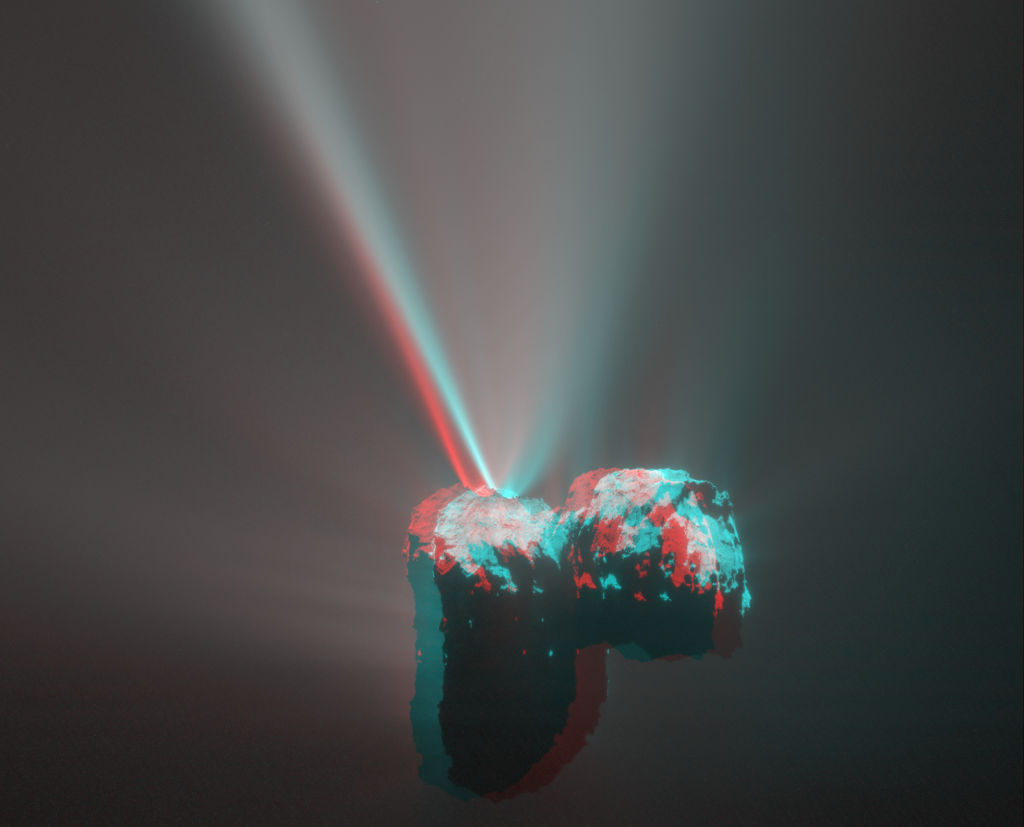 A 3D anaglyph view of Comet 67P/Churyumov-Gerasimenko based on two images acquired by Rosetta’s OSIRIS narrow angle camera on 12 August 2015, capturing a spectacular jet event. The two images are separated by 2 minutes 28 seconds, which corresponds to a stereo angle of 1.2 degrees. The image scale is 3.9 metres per pixel. In this orientation the Babi and Aker regions are visible on the large lobe to the left, while Ma’at and the circular Hatmehit depression are seen on the small lobe to the right. Diffuse dust emission and other jets are visible all around the nucleus. Acknowledgement: D. Romeuf (University Claude Bernard Lyon 1, France; images: ESA/Rosetta/MPS for OSIRIS Team MPS/UPD/LAM/IAA/SSO/INTA/UPM/DASP/IDA

But creating a 3d anaglyph of dynamic events like this is notoriously difficult: often the jets are too faint or their duration is too short to find two high-quality images taken several minutes apart that are suitable to pair together to create this type of view. However, the OSIRIS team got lucky with this particular event, capturing two images separated by about two-and-a-half minutes.

The image shows a bright, collimated jet embedded in a broader emission structure. The three dimensional perspective also reveals the conical shape of the jet and that the collimated feature is emitted towards the observer.

Jets have been seen to originate from a large diversity of morphological features on the comet’s surface, such as pits, cliffs or icy boulder fields. The physical processes responsible for the different jet structures are subject to much discussion, but anaglyphs like these can certainly help in gaining an understanding of their three dimensional form and evolution.

The image is best enjoyed with red-blue/green ‘3D’ anaglyph glasses. The left- and right-eye views have been extracted and are provided below.

Additional images and a movie of the perihelion jets and general activity can also be viewed here and here. 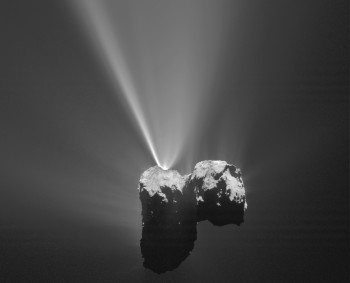 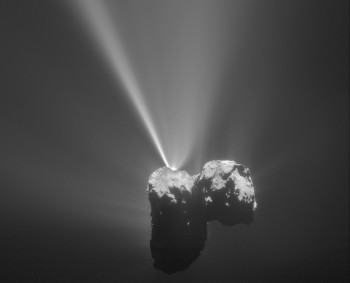