How Rosetta’s comet got its shape

This news item is mirrored from the main ESA Web Portal. 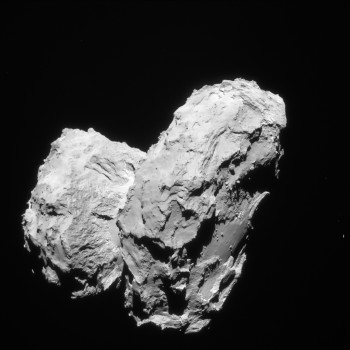 Two comets collided at low speed in the early Solar System to give rise to the distinctive ‘rubber duck’ shape of Comet 67P/Churyumov–Gerasimenko, say Rosetta scientists.

The origin of the comet’s double-lobed form has been a key question since Rosetta first revealed its surprising shape in July 2014.

Two leading ideas emerged: did two comets merge or did localised erosion of a single object form the ‘neck’?

Now, scientists have an unambiguous answer to the conundrum. By using high-resolution images taken between 6 August 2014 and 17 March 2015 to study the layers of material seen all over the nucleus, they have shown that the shape arose from a low-speed collision between two fully fledged, separately formed comets. 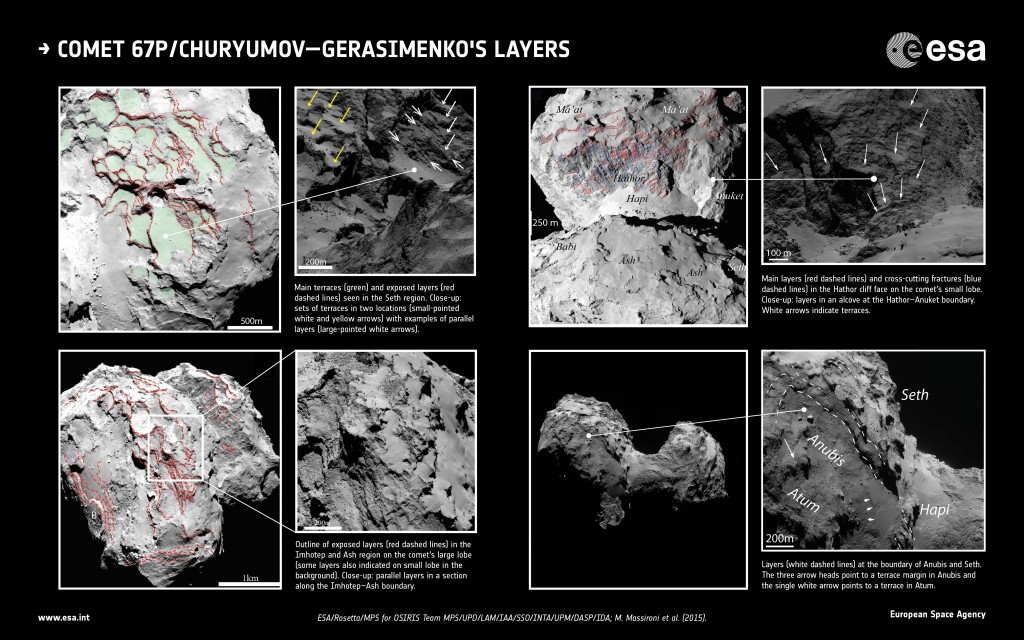 “It is clear from the images that both lobes have an outer envelope of material organised in distinct layers, and we think these extend for several hundred metres below the surface,” says Matteo Massironi, lead author from the University of Padova, Italy, and an associate scientist of the OSIRIS team.

“You can imagine the layering a bit like an onion, except in this case we are considering two separate onions of differing size that have grown independently before fusing together.”

The results of the study are reported in the journal Nature and were presented today at the European Planetary Science Congress in Nantes, France.

To reach their conclusion, Matteo and his colleagues first used images to identify over 100 terraces seen on the surface of the comet, and parallel layers of material clearly seen in exposed cliff walls and pits. A 3D shape model was then used to determine the directions in which they were sloping and to visualise how they extend into the subsurface.

It soon became clear that the features were coherently oriented all around the comet’s lobes and in some places extended to a depth of about 650 m.

“This was the first clue that the two lobes are independent, reinforced by the observation that the layers are inclined in opposite directions close to the comet’s neck,” says Matteo.

“To be sure, we also looked at the relationship between the local gravity and the orientations of the individual features all around the reconstructed comet surface.”

Broadly speaking, layers of material should form at right angles to the gravity of an object. The team used models to compute the strength and direction of the gravity at the location of each layer.

In one case, they modelled the comet as a single body with a centre of mass close to the neck. In the other, they worked with two separate comets, each with its own centre of mass. 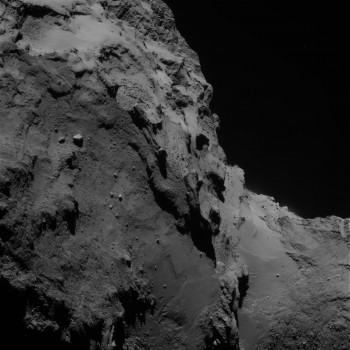 The team found that orientation of a given layer and the direction of the local gravity are closer to perpendicular in the model with two separate objects, rather than in the one with a single combined nucleus.

“This points to the layered envelopes in the comet’s head and body forming independently before the two objects merged later,” concludes Matteo. “It must have been a low-speed collision in order to preserve such ordered strata to the depths our data imply.”

“In addition, the striking structural similarities between the two lobes imply that despite their initially independent origins, they must have formed through a similar accretion process,” adds co-author Bjorn Davidsson of Uppsala University, Sweden. 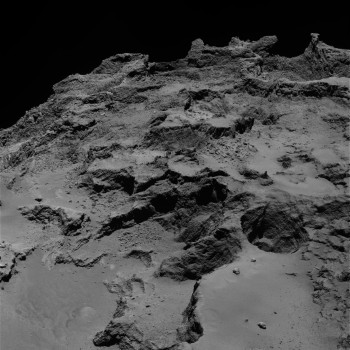 “Layering has also been observed on the surface of other comets during previous flyby missions, suggesting that they also underwent a similar formation history.”

Finally, the team note that even though erosion is not the root cause of the comet’s double-lobed shape, it nevertheless does play an important role in the comet’s evolution today.

Local variations seen in the structure of the surface likely result from different rates of sublimation – when ice turns directly into a gas – of frozen gases embedded within the individual layers, which are not necessarily distributed evenly throughout the comet.

“How the comet got its curious shape has been a major question since we first saw it. Now, thanks to this detailed study, we can say with certainty that it is a ‘contact binary’,” says Holger Sierks, OSIRIS principal investigator at the Max Planck Institute for Solar System Research in Göttingen.

“This result adds to our growing knowledge of the comet – how it formed and its evolution,” says Rosetta project scientist Matt Taylor.

“Rosetta will continue to observe the comet for another year, to get the maximum amount of information on this celestial body and its place in the history of our Solar System.”

“The two independent and primitive envelopes of the bilobate nucleus of comet 67P/C-G,” by M. Massironi et al., is published as Advanced Online Publication on www.nature.com today.

Dr Massironi presented the study today at the European Planetary Science Congress in Nantes, France, in a dedicated press briefing.

Editor’s note: Readers may also be interested in the paper “The shape and structure of cometary nuclei as a result of low velocity accretion,” by Jutzi and Asphaug (2015); their computer simulation of an example comet nucleus collision can be seen here.