Extreme thermal stresses experienced by a comet as it orbits around the Sun could explain the extensive fracturing thought to drive its long-term surface erosion, say Rosetta scientists analysing high-resolution images of Comet 67P/Churyumov-Gerasimenko’s surface.

The study, which is published online in the journal Geophysical Research Letters, is based on images taken between 6 August 2014 – when Rosetta first arrived at the comet – and 1 March 2015, and includes detailed images acquired from between just 8 and 18 km from the comet’s surface.

Ramy’s team identified three distinct settings in which the fractures occur: networks of long narrow fractures, fractures on cliffs and fractured boulders. In addition, several unique features were identified: the parallel fractures running across Hathor’s 900 m-high cliffs, an isolated 500 metre-long crevice in the Anuket region of the comet’s neck, and a 200 m-long complex crack system in Aker on the large lobe.

“The fractures show a variety of morphologies and occur all over the surface and at all scales: they are found in the towering 900 m-high cliffs of Hathor right down to the surfaces of boulders a few metres across,” describes lead author M. Ramy El-Maarry from the University of Bern.

The most prevalent setting appears to be networks of narrow fractures that extend for a few metres to 250 m in length, typically on relatively flat surfaces. Interestingly, in some locations, the fractures appear to cross cut each other in polygonal patterns at angles of 90º – on Earth and Mars this is often an indicator of ice that has contracted below the surface. 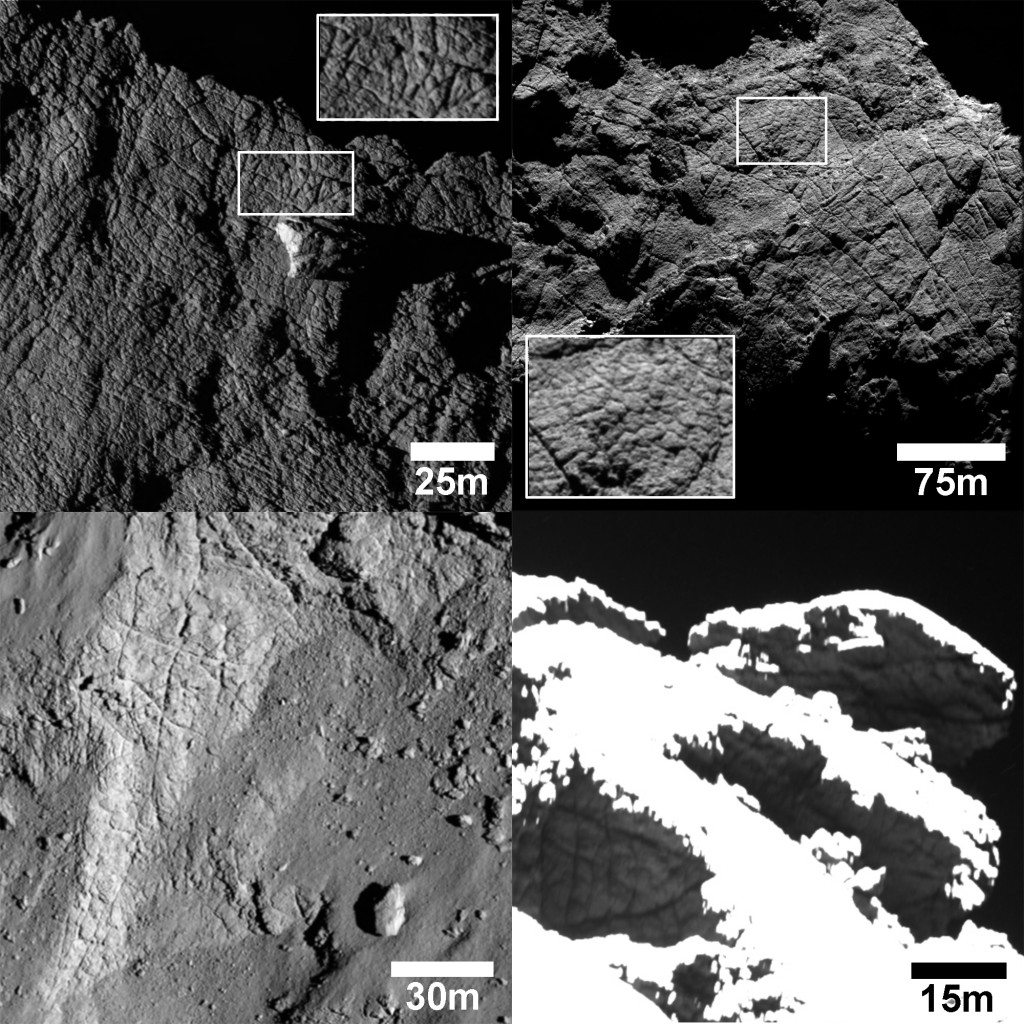 The variety of fracture networks found on Comet 67P/C-G, with an indication of physical scales. The top left image shows polygonal fractures on the edge of the Apis region, on the comet large lobe. The zoomed-in insert shows that the patterns are composed of irregular 2–5 meters-wide polygons. The top right image shows a pervasively fractured region at the edge of the Atum region, close to the comet’s neck. Fractures vary greatly in length, with the longest visible one measuring about 250 m. Within this irregular pattern, a more regular pattern of 2–6 m-wide polygons is also visible, as shown in the insert. The bottom left image shows a regular patterns of fractures at the edge of the Nut region, a narrow, elongated depression on the small comet lobe. Patterns of 15 m-wide polygons with orthogonal fracture intersections are also visible. The bottom right image shows polygonal patterns on the edge the ridge separating the Anubis/Atum regions from Ash and Seth, on the large comet lobe The image has been overexposed to highlight the shadowed features, and smaller polygons with sizes of 2–5 m are also visible. A non-annotated version of the image is provided below. Credits: ESA/Rosetta/MPS for OSIRIS Team MPS/UPD/LAM/IAA/SSO/INTA/UPM/DASP/IDA

Another family of cross-cutting fractures is observed on cliff faces, such as in the Seth region on the comet’s large lobe, with debris deposits littering their bases. Fractured cliff faces were also observed at Abydos, the final landing site of Philae on the small lobe, as recorded in images from the lander. The fact that the fractures cut across each other in different directions suggests that the stress direction changes over time.

Fractures found on cliffs on Comet 67P/C-G. The large image on the left shows the Ash region (located on the large comet lobe) in the foreground and the regions of Hathor and Anuket (both on the comet’s neck), in the background. The two boxes highlight two small portions of the comet surface, which are shown in greater detail in the two close-ups, with an indication of the physical scale. The top close-up shows a fractured scarp and what appears to be a new fracture (indicated with a yellow arrow) cross-cutting two older fractures (orange arrows). The new fracture is 100–125 cm-wide and is expected to lead to ‘mass-wasting’ of the fractured scarp. The bottom close-up shows another small fracture (indicated with a yellow arrow) that appears to cut though the scarp edge and the smooth coating on the top, which is a morphologic characteristic of the Ash region. The image on the right shows a portion of the Seth region exhibiting a similarly fractured scarp (indicated with a white arrow) and a debris field in at the foot of the cliff suggesting a progressive process of ‘mass-wasting’. Non annotated versions of the individual images are provided below. Credits: ESA/Rosetta/MPS for OSIRIS Team MPS/UPD/LAM/IAA/SSO/INTA/UPM/DASP/IDA

These two images show two fractured boulders found in the Imhotep (left) and Atum (right) regions, respectively. Fracturing in the Imhotep boulder is so pervasive it has led to fragmentation of the 60 m-wide boulder. An indication of the physical scale is provided; a non-annotated version of the image is available below. Credits: ESA/Rosetta/MPS for OSIRIS Team MPS/UPD/LAM/IAA/SSO/INTA/UPM/DASP/IDA

Scientists think that the majority of these fracture patterns are most likely linked to the thermal history of the comet and result from stresses that stretch the comet’s surface apart. On Earth and Mars at least, these ‘tensile’ fractures can develop through several common processes: loss of volatile materials, thermal contraction or contraction and expansion cycles, and tectonic processes.

In addition to throwing off volatile materials as they near the Sun, comets are known to undergo high fluctuations in surface and subsurface temperature on daily and seasonal timeframes. This continuous thermal ‘shock’ leads to weakening or “fatigue” of the surface both on the short term due to daily heating cycles, and on the long term as the seasons change along the comet’s 6.5 year orbit around the Sun. 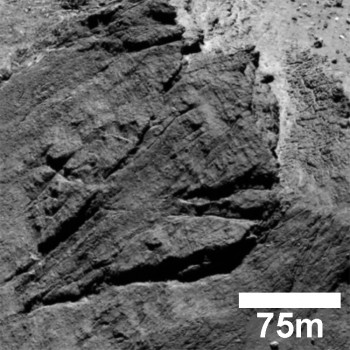 A 200-m complex fracture system in the Aker region, on the comet large lobe. This is an isolated feature in the context of the surrounding morphology. An indication of the physical scale is provided; a non-annotated version of the image is available below. Credits: ESA/Rosetta/MPS for OSIRIS Team MPS/UPD/LAM/IAA/SSO/INTA/UPM/DASP/IDA

“But the presence of fractures in different settings, in addition to the isolated fractures in Anuket and Aker, suggests that other mechanisms may also be at work,” comments Ramy. “For example, perhaps mechanical forces related to the comet’s rotation or orbit around the Sun are responsible for the crack in Anuket, while the fractured cliffs of Hathor could have resulted from the comet’s formation, perhaps when two smaller cometisimals collided.”

Regardless of the origin of individual fracture systems, it is clear that fracturing plays an important role in the evolution of the comet’s surface.

Fractures observed in cliffs, with debris observed at their bases, imply that this phenomenon represents the first stage in the overall ‘mass-wasting’ of the comet: the cliff top is weakened and a landslide-type event ensues.

But, over long periods this process would act to erode the surface and flatten the landscape. The fact that there are many rough terrains on the comet suggests that it has either not gone through very many erosional cycles or other processes are acting against this to roughen the surface, such as explosive jet activity.

“Monitoring for changes in these fracture systems after the current perihelion phase, and running models to simulate the evolution of the comet over time, will enable us to test our various hypotheses for fracture formation,” adds Ramy.

Non-annotated versions of the images are provided below: 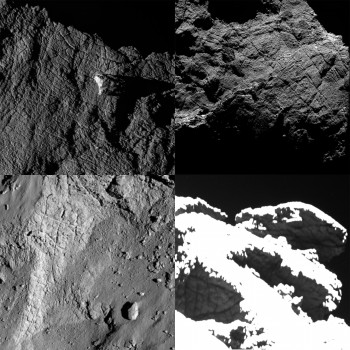 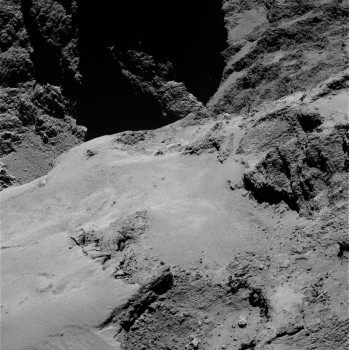 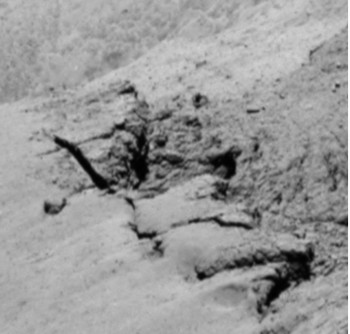 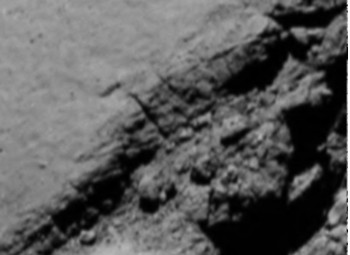 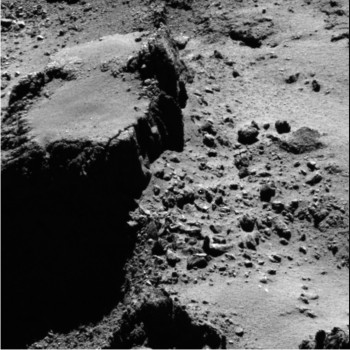 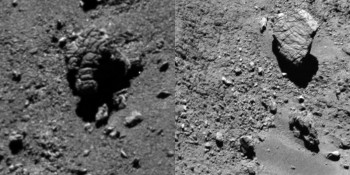 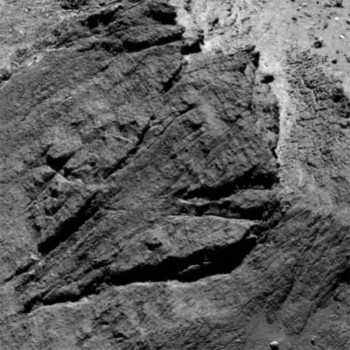