Rosetta shows how comet interacts with the solar wind

Rosetta is making good progress in one of its key investigations, which concerns the interaction between the comet and the solar wind.

The solar wind is the constant stream of electrically charged particles that flows from the Sun, carrying its magnetic field out into the Solar System. Like all comets, 67P/Churyumov–Gerasimenko must navigate this flow in its orbit around the Sun. 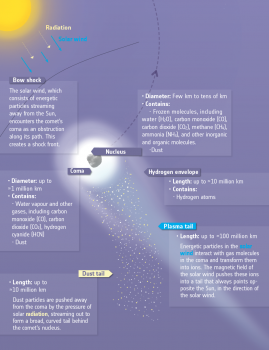 It is the constant battle fought between the comet and the solar wind that helps to sculpt the comet’s ion tail. Rosetta’s instruments are monitoring the fine detail of this process.

Using the Rosetta Plasma Consortium Ion Composition Analyzer, Hans Nilsson from the Swedish Institute of Space Physics and his colleagues have been studying the gradual evolution of the comet’s ion environment. They have seen that the number of water ions – molecules of water that have been stripped of one electron – accelerated away from the comet increased hugely as 67P/C-G moved between 3.6AU (about 538 million km) and 2.0AU (about 300 million km) from the Sun. Although the day-to-day acceleration is highly variable, the average 24-hour rate has increased by a factor of 10,000 during the study, which covered the period August 2014 to March 2015.

The water ions themselves originate in the coma, the atmosphere of the comet. They are placed there originally by heat from the Sun liberating the molecules from the surface ice. Once in gaseous form, the collision of extreme ultraviolet light displaces electrons from the molecules, turning them into ions. Colliding particles from the solar wind can do this as well. Once stripped of some of their electrons, the water ions can then be accelerated by the electrical properties of the solar wind.

Not all of the ions are accelerated outwards, some will happen to strike the comet’s surface. Solar wind particles will also find their way through the coma to hit home. When this happens, they cause a process called sputtering, in which they displace atoms from material on the surface – these are then ‘liberated’ into space.

Peter Wurz from the University of Bern, Switzerland, and colleagues have studied these sputtered atoms with Rosetta’s Double Focussing Mass Spectrometer (DFMS), which is part of the ROSINA experiment.

They have so far discovered sodium, potassium, silicon and calcium, which are all present in a rare form of meteorites called carbonaceous chondrites. There are differences in the amounts of these atoms at the comet and in these meteorites, however. While the abundance of sodium appears the same, 67P/C-G shows an excess of potassium and a depletion of calcium.

Most of the sputtered atoms come from the winter side of the comet. Although this is the hemisphere that is mostly facing away from the Sun at present, solar wind particles can end up striking the surface because they are deflected during interactions with ions in the comet’s coma. This can be a significant process so long as the density of the coma ions is not too large. But at some point the comet’s atmosphere becomes dense enough to be a major defence, protecting the icy surface. 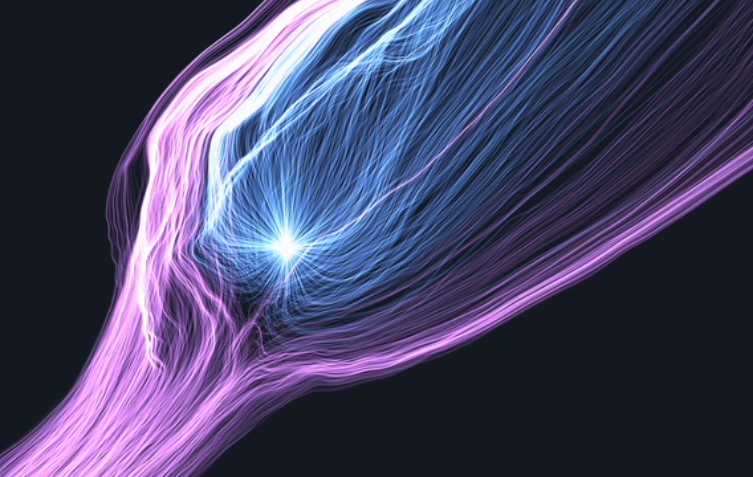 As the comet gets closer to the Sun, the sputtering will eventually stop because the comet will release more gas and the coma will become impenetrable. When this happens, the solar wind ions will always collide with atoms in this atmosphere or be deflected away before striking the surface.

The first evidence that this deflection is taking place at 67P/C-G has been measured with the Rosetta Plasma Consortium Ion and Electron Sensor, by Thomas Broiles of the Southwest Research Institute (SwRI) in San Antonio, Texas, and colleagues.

Their observations began on 6 August 2014 when Rosetta arrived at the comet, and have been almost continuous since. The instrument has been measuring the flow of the solar wind as Rosetta orbits 67P/C-G, showing that the solar wind can be deflected by up to 45° away from the anti-solar direction.

The deflection is largest for the lighter ions, such as protons, and not so much for the heavier ions derived from helium atoms. For all ions the deflection is set to increase as the comet gets closer to the Sun and the coma becomes ever denser.

As all this happens, Rosetta will be there to continue monitoring and measuring the changes. This was the raison d’être for the rendezvous with this comet. Previous missions have taken snapshots during all too brief fly-bys but Rosetta is showing us truly how a comet behaves as it approaches the Sun.

Read “Evolution of the ion environment of comet 67P/Churyumov-Gerasimenko: Observations between 3.6 and 2.0 AU” by H. Nilsson et al. here.

Read “Dynamical features and spatial structures of the plasma interaction region of 67P/Churyumov–Gerasimenko and the solar wind” by C. Koenders et al. here.