Chasing a comet from Earth – update on the professional observing campaign

An interview with Colin Snodgrass of the Open University, UK, who coordinates a consortium of professional astronomers observing Comet 67P/Churyumov-Gerasimenko from Earth in support of the Rosetta mission.

Q: Rosetta has been ‘living’ with Comet 67P/Churyumov-Gerasimenko for almost a year now. How was this year from the perspective of the professional astronomers observing the comet with telescopes on Earth?
A: It has been a very exciting year for everyone in comet science, following the results from Rosetta, but thankfully the ground-based view of 67P didn’t get too exciting yet – the comet largely followed our predictions in terms of its total brightness, which is reassuring as it allows us to have confidence in our plans for observing (and for Rosetta). We watched the comet grow from a single dot to show a clear comet-like shape in 2014, and then had a relatively long winter where we couldn’t observe the comet (between November and April). Now that the comet is back within reach of our telescopes, it is an even more impressive sight, with a long tail visible in deeper images. Recently, as the comet is approaching perihelion, it is much more active. We can now study the gasses and large-scale dust jets in the coma from ground-based observations. 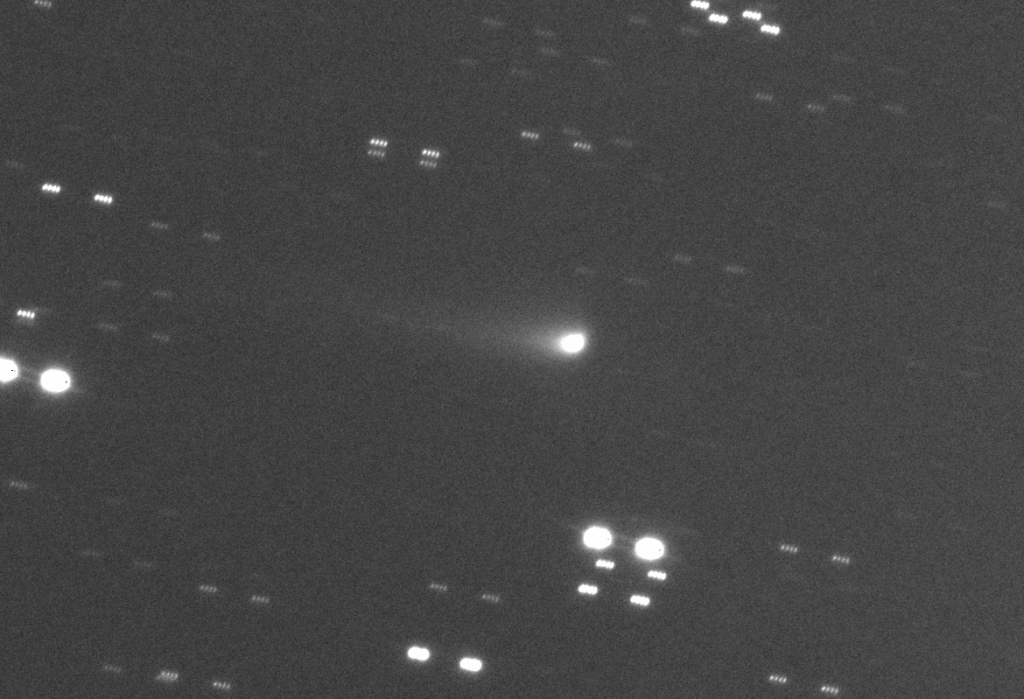 Recent image from the 2 m Liverpool Telescope, taken on the morning of 19 July 2015. It comprises 10 x 20s r-band images. The length of the tail visible in the image in the twilight sky is approximately 120,000 km.
Credit: Colin Snodgrass / Geraint Jones / Liverpool Telescope

Q: How many observatories were involved and how often have they observed the comet?
A: In 2014, the comet was still relatively faint, with a magnitude of around 20, approximately 400,000 times fainter than the naked eye can detect, so most of the observations were performed with some of the biggest telescopes available on the ground: the European Southern Observatory’s Very Large Telescope and the Association of Universities for Research in Astronomy’s Gemini South telescope, both located in Chile. Other observatories were also used, including the TRAPPIST comet-chasing telescope, also in Chile, the Nordic Optical Telescope on La Palma, in the Canary Islands, and the Las Cumbres Observatory Global Telescope Network, which operates robotic telescopes at several locations across the globe. 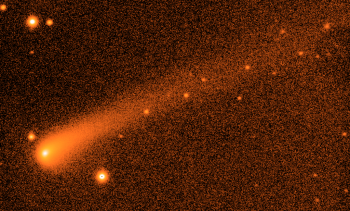 Recent image of Comet 67P/C-G based on data acquired from the VLT on 8 July 2015. Credits: Alan Fitzsimmons / Colin Snodgrass / ESO

Then, from the end of 2014 and for the first few months of 2015, the comet was too close to the Sun to be observed from anywhere on Earth; when professional telescopes could see it again, in May, it was much brighter than at the end of 2014, with a magnitude around 15. Many more telescopes in the northern hemisphere are now becoming involved in the observations, including the William Herschel Telescope and the Telescopio Nazionale Galileo on La Palma and ESA’s optical ground station on Tenerife, in the Canary Islands, the BTA-6 optical telescope of the Special Astrophysical Observatory of the Russian Academy of Science in the Caucasus Mountains, the Canada France Hawaii Telescope and the NASA Infrared Telescope Facility on Mauna Kea, Hawaii. Some of our colleagues are also observing the comet at microwave and radio wavelengths with the IRAM and ALMA observatories. We are now following the comet most nights using robotic telescopes, including the Liverpool Telescope on La Palma and the STELLA telescope on Tenerife, which have made special efforts to aid our campaign – enabling new modes of operation to track a moving target like 67P in the case of STELLA, and even building a completely new spectrograph to be sensitive to cometary gasses on the Liverpool Telescope. 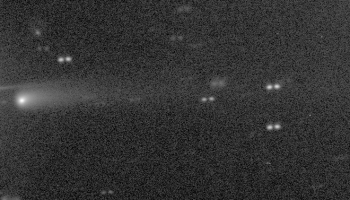 Comet 67P/C-G on 22 May taken with the VLT/FORS2 instrument. It is a combination of 2 x 30s R-band exposures, aligned on the comet. The comet moved against the background stars between the two images, leading to double stars in this combination. Credits: Colin Snodgrass / Alan Fitzsimmons / ESO

Q: What can you tell from the data? Is the comet behaving as expected from its previous perihelion passes?
A: The comet’s large-scale activity is increasing in good agreement with the predictions from previous observations. However, comets are unpredictable and we must always expect the unexpected! For this reason, it is especially important to have a large network of telescopes involved in the campaign, so that we can guarantee a fast response in the case of any sudden change to the comet’s behaviour. After perihelion we will also have special ‘target of opportunity’ mode observations ready, which can be triggered on short notice, just in case there is a major outburst at the comet.

One of the other results that we have from observations so far is that there is a significant asymmetry in the comet’s activity – we have only recently been able to detect the gas in the coma from the ground, but we know that we were able to detect the same gasses much further from the Sun after perihelion in previous orbits. We will continue to follow the comet throughout the rest of the extended Rosetta mission to confirm this, and to better understand why this is the case.

Q: Which telescopes will be observing the comet around perihelion?
A: At perihelion the comet is in northern skies, so it cannot be seen from the larger telescopes in Chile, like the VLT and Gemini South. Our campaign moves to telescopes north of the equator, including those in Hawaii (e.g. Gemini North, NASA’s IRTF) and the mainland USA, and European facilities, especially those situated in the Canary Islands. 67P is too close to the Sun to point the Hubble Space telescope to it until October, but a large variety of telescopes on the ground are able to contribute – but only for a very short period before sunrise each night. This is one of the reasons to have telescopes around the world observing.

Q: What are you looking forward the most from these observations?
A: As the comet reaches perihelion its activity level is high enough that we can detect jets within the coma that are thousands of kilometres in length. These must somehow be linked with the activity pattern that Rosetta sees at the nucleus, but as yet no one knows how the small jets seen in OSIRIS or NAVCAM images (which are only a few km long) relate to the very large-scale structure seen from ground.

Coming up on the blog soon: an update on the amateur observing programme and how you can get involved.