Over the last few weeks, Rosetta has been flying along the terminator plane of Comet 67P/Churyumov-Gerasimenko, at distances from 180 km down to 153 km and at latitudes between 0 and 54 degrees, in order to find the best location to communicate with Philae.

However, over the weekend of 10–11 July, the star trackers again struggled to lock on to stars at the closer distances thanks to confusion due to dust particles in the comet’s increasingly-active environment. Because safety of the spacecraft is the first priority, it is therefore being moved back to safer distances of 170–190 km. 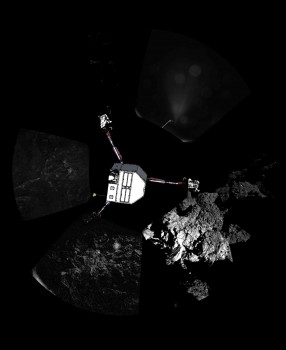 360º view around the point of Philae’s final touchdown. The three feet of Philae’s landing gear can be seen in some of the frames. Superimposed on top of the image is a sketch of the Philae lander in the configuration the lander team believed it was in November 2014. Credits: ESA/Rosetta/Philae/CIVA

No contact has been made with Philae since Thursday 9 July. The data acquired at that time are being investigated by the lander team to try to better understand Philae’s situation.

For example, included in the latest data set was information on the sunlight reaching the lander’s different solar panels.

“The profile of how strongly the Sun is falling on which panels has changed from June to July, and this does not seem to be explained by the course of the seasons on the comet alone,” explains Philae’s project manager, Stephan Ulamec at DLR.

One possible explanation being discussed at DLR’s Lander Control Center is that the position of Philae may have shifted slightly, perhaps by changing its orientation with respect to the surface in its current location. The lander is likely situated on uneven terrain, and even a slight change in its position – perhaps triggered by gas emission from the comet – could mean that its antenna position has also now changed with respect to its surroundings. This could have a knock-on effect as to the best position Rosetta needs to be in to establish a connection with the lander.

Philae is programmed to switch periodically back and forth between these two transmission units, and after tests on the ground reference model, the team has sent a command to the lander to make it work with just one transmitter. As Philae is able to receive and accept commands of this kind in the “blind”, it should execute it as soon as it is supplied with solar energy during the comet’s day.

The current status of Philae remains uncertain and is a topic of on-going discussion and analysis. But in the meantime, further commands are being prepared and tested to allow Philae to re-commence operations. The lander team wants to try to activate a command block that is still stored in Philae’s computer and which was already successfully performed after the lander’s unplanned flight across to the surface to its final location. This “safe block” set of activities includes temperature measurements by the thermal probe MUPUS, measurements by ROMAP and SESAME, and analysis by PTOLEMY and COSAC in sniffing mode, and do not involve moving any mechanism on lander. No detailed commands are needed: if operated in the currently stored configuration, the “safe block” only needs to be activated. 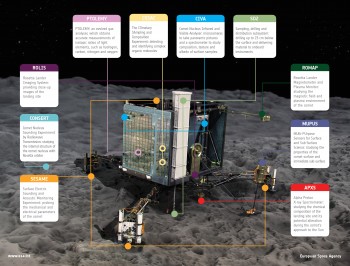 If this commanding works, Philae could re-start its scientific measurements and, if a link is established with Rosetta, it would be able to send its data back to Earth, via the orbiter.

The team has already tried to ‘call’ ROMAP in a similar way to the commands sent to the CONSERT instrument earlier in the month, but so far no confirmation signal has been returned. The situation continues to be analysed with the available data.

“Philae is obviously still functional, because it sends us data, even if it does so at irregular intervals and at surprising times,” adds Stephan Ulamec. “Several times we were afraid that the lander would remain off – but it has repeatedly taught us otherwise”.

From the end of this week, Rosetta will begin alternating lander communication attempts with its own scientific observations of the comet, including exploration of the southern latitudes, which have only started to become illuminated in recent months.

“Studying these regions is an important part of our long-term science goals in the lead up to and beyond perihelion next month, when the comet is at its closest to the Sun along its orbit and activity will be at a maximum,” comments Nicolas Altobelli, acting Rosetta project scientist while Matt Taylor is on holiday.

“Although the mission will now focus its scientific priority on the orbiter, Rosetta will continue attempting – up to and past perihelion – to obtain Philae science packets once a stable link has been acquired,” adds Patrick Martin, Rosetta mission manager.

About Rosetta
Rosetta is an ESA mission with contributions from its Member States and NASA. Rosetta’s Philae lander is contributed by a consortium led by DLR, MPS, CNES and ASI.