This story is mirrored from the main ESA web portal and is based on a paper just published in the journal Nature.

A number of the dust jets emerging from Rosetta’s comet can be traced back to active pits that were likely formed by a sudden collapse of the surface. These ‘sinkholes’ are providing a glimpse at the chaotic and diverse interior of the comet.

Rosetta has been monitoring Comet 67P/Churyumov–Gerasimenko’s activity for over a year, watching how its halo of dust and gas grows as the comet moves closer to the Sun along its orbit. 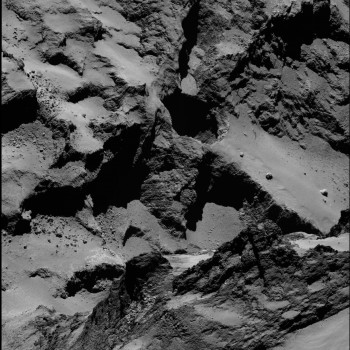 High-resolution view of active regions in Seth as seen with Rosetta’s OSIRIS narrow-angle camera on 20 September 2014 from a distance of about 26 km from the surface. The image scale is about 45 cm/pixel. The Seth_01 pit is seen close to centre and measures approximately 220 m across and 185 m deep. The image has not been enhanced to reveal the jets of activity, but instead focuses on the rich diversity of the comet’s geology both inside the active regions and in the surrounds. Credits: ESA/Rosetta/MPS for OSIRIS Team MPS/UPD/LAM/IAA/SSO/INTA/UPM/DASP/IDA

From a distance of a few hundred kilometres, Rosetta observes an intricate pattern of the dust jets emitted from the nucleus as they stream out into space. But now, thanks to high-resolution images from the OSIRIS camera from distances of just 10–30 km from the comet centre last year, at least some of these dust jets can be traced back to specific locations on the surface, the first time this has ever been seen.

In a study reported today in the science journal Nature, 18 quasi-circular pits have been identified in the northern hemisphere of the comet, some of which are the source of continuing activity.

The pits are a few tens to a few hundreds of metres in diameter and extend up to 210 m below the surface to a smooth dust-covered floor. Material is seen to be streaming from the most active pits.

“We see jets arising from the fractured areas of the walls inside the pits. These fractures mean that volatiles trapped under the surface can be warmed more easily and subsequently escape into space,” says Jean-Baptiste Vincent from the Max Planck Institute for Solar System Research, lead author of the study. 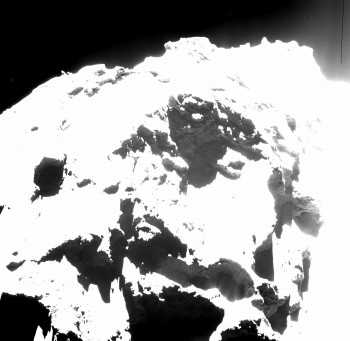 Active pits detected in the Seth region of Comet 67P/Churyumov¬Gerasimenko can be seen in the lower right portion of this OSIRIS wide-angle camera image. The contrast of the image has been deliberately stretched to reveal the details of the fine-structured jets against the shadow of the pit, which are interpreted as dusty streams rising from the fractured wall of the pit. The image was acquired on 20 October 2014 from a distance of 7 km from the surface of the comet. Credits: ESA/Rosetta/MPS for OSIRIS Team MPS/UPD/LAM/IAA/SSO/INTA/UPM/DASP/IDA

Scientists analysing the images think that the pits are formed when the ceiling of a subsurface cavity becomes too thin to support its own weight and collapses as a sinkhole. This exposes the fractured interior of the comet, allowing otherwise hidden material to sublimate, thus continuing to erode the pit over time.

“Although we think the collapse that produces a pit is sudden, the cavity in the porous subsurface could have growing over much longer timescales,” says co-author Sebastien Besse, of ESA’s ESTEC technical centre in the Netherlands.

The authors suggest three possible ways the voids are formed.

One idea is that they have existed since the comet itself formed, as a result of very low-speed collisions between primordial building blocks tens to hundreds of metres in size. The collapse of the roof above such a void could then be triggered through weakening of the surface, perhaps by sublimation or via seismic shaking or impact from boulders ejected from elsewhere on the comet.

Another possibility is the direct sublimation of pockets of volatile ices like carbon dioxide and carbon monoxide below the surface, heated by the warmth of sunlight penetrating an insulating top layer of dust.

Alternatively, sublimation could be driven by the energy liberated by water ice changing its physical state from amorphous to crystalline then sublimating the more volatile surrounding carbon dioxide and carbon monoxide ices.

If either of the latter two processes is the driving force, then the fact that the pits are not seen everywhere may indicate an uneven distribution of ices inside the comet.

“Regardless of the processes creating the cavities, these features show us that there are large structural and/or compositional differences within the first few hundred metres of the comet’s surface and the cavities are revealing relatively unprocessed materials that might not otherwise be visible,” adds Sebastien.

The authors note that the internal features revealed on the pit walls vary quite significantly from pit to pit, and include fractured material and terraces, horizontal layers and vertical striations, and/or globular structures nicknamed ‘goosebumps’.

“We think that we might be able to use the pits to characterise the relative ages of the comet’s surface: the more pits there are in a region, the younger and less processed the surface there is,” explains Jean-Baptiste.

“This is confirmed by recent observations of the southern hemisphere: this is more highly processed because it receives significantly more energy than the northern hemisphere, and does not seem to display similar pit structures.”

Pits Ma’at 1, 2 and 3 on Comet 67P/Churyumov–Gerasimenko show differences in appearance that may reflect their history of activity. While pits 1 and 2 are active, no activity has been observed from pit 3. The young, active pits are particularly steep-sided, whereas pits without any observed activity are shallower and seem to be filled with dust. Middle-aged pits tend to exhibit boulders on their floors from mass-wasting of the sides. The image was taken with the OSIRIS narrow-angle camera from a distance of 28 km from the comet surface.
Credits: ESA/Rosetta/MPS for OSIRIS Team MPS/UPD/LAM/IAA/SSO/INTA/UPM/DASP/IDA

The active pits are particularly steep-sided, whereas pits without any observed activity are shallower and may instead indicate regions that were active in the past. The team suggests that the active pits are the youngest, while middle-aged pits exhibit boulders on their floors that have fallen from the sides. Meanwhile, the oldest pits have degraded rims and are filled with dust.

“We are continuing to analyse our observations to see if this theory holds true, and if this ‘time series’ is related to the internal thermal evolution of the comet, for example,” adds Sebastien.

“But we think that most of the active pits must have been present for several orbits around the Sun already, or else we would have expected to see a number of outbursts as their collapses were triggered this time around.”

Rosetta did witness one outburst during its approach to the comet in April 2014, which is thought to have generated between 1000 kg and 100 000 kg of material. The authors state that a pit collapse could have been the driver for this outburst, but only a small fraction of the total volume of a typical pit could have been liberated at the time.

For example, given the measured average comet density of 470 kg per cubic metre, the rapid evacuation of a typical large pit 140 m wide and 140 m deep would result in the release of around a billion kilograms of material, several orders of magnitude greater than was observed in April 2014.

“We are very interested to see how these active pits evolve and maybe we’ll even witness the formation of a new pit,” says Matt Taylor, ESA’s Rosetta project scientist.

“Being able to observe changes in the comet, in particular linking activity to features on the surface, is a key capability of Rosetta and will help us to understand how the comet’s interior and surface have evolved since its formation.

“And with the extension of the mission until September 2016, we can do the best job possible at unravelling how comets work.”

“Large heterogeneities in comet 67P as revealed by active pits from sinkhole collapse,” by Jean-Baptiste Vincent et al is published in Nature.