Astronomers using ESO’s ground-based Very Large Telescope (VLT) in Chile are watching the development of Comet 67P/Churyumov-Gerasimenko’s coma and tail from Earth. This image is based on data acquired on 22 May and is about 300 000 km wide at the distance of the comet. 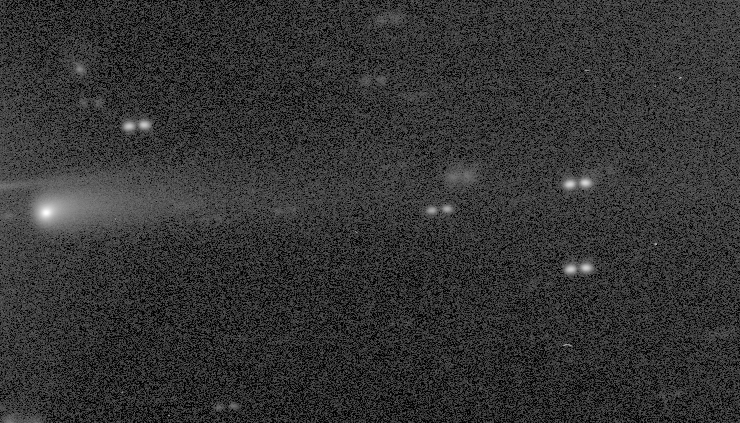 Comet 67P/C-G on 22 May taken with the VLT/FORS2 instrument. It is a combination of 2 x 30s R-band exposures, aligned on the comet. The comet moved against the background stars between the two images, leading to double stars in this combination. Credits: Colin Snodgrass / Alan Fitzsimmons / ESO

The comet’s dusty coma and tail is swept away from the Sun, which is towards the left of the image in this orientation. The tail can be seen to stretch at least 120 000 km in this relatively shallow image, and in deeper images, the coma alone is estimated to be at least 80–100 000 km across.

As each pixel in this image spans roughly 400 km at the comet, both Rosetta and the nucleus of 67P/C-G are too small to be resolved. But images like these provide important context information for the images taken by the spacecraft close to the comet, as its activity increases towards perihelion.

This image will be shown as part of the BBC Sky at Night TV programme in the UK on Sunday 14 June. The episode is a Rosetta special and includes interviews with a number of scientists discussing what we have learned about Comet 67P/C-G so far.