During its most recent close flyby last Saturday, where Rosetta flew within 14 km of the surface of the comet, the spacecraft experienced significant difficulties in navigation. This resulted in its high gain antenna starting to drift away from pointing at the Earth, impacting communications, and was subsequently followed by a ‘safe mode’ event. The spacecraft has now been successfully recovered, but it will take a little longer to resume normal scientific operations. Here is the full report from the mission team:

Rosetta has been flying a series of flyby trajectories around Comet 67P/C-G since February, allowing the spacecraft to collect scientific data from a range of distances. Its closest flyby to date took it just 6 km from the surface of the comet – over the Imhotep region on the comet’s large lobe – on 14 February. On Saturday 28 March, Rosetta performed a 16 km flyby (about 14 km from the surface), also over the comet’s large lobe. 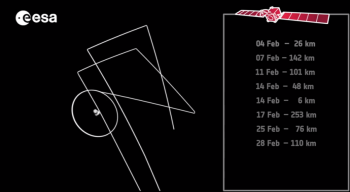 With activity from the comet increasing as it moves closer to the Sun, operating Rosetta close to the comet means flying through denser regions of outflowing gas and dust. This results in the spacecraft and its large solar arrays being exposed to significantly more drag. Furthermore, as experienced during the 14 February flyby, operating this close to the comet also has another effect: the spacecraft’s star trackers, used to navigate, are confused by mistaking comet debris for stars.

Rosetta’s star trackers are marked in red, and part of the high gain antenna can be seen in the background. Credit: ESA/ATG medialab. (Note that this is a still image taken from our 2013 animation “How Rosetta wakes up from deep space hibernation”)

During the most recent flyby, a number of issues were reported, starting with the primary star tracker encountering difficulties in locking on to stars on the way in towards closest approach. Attempts were made to regain tracking capabilities, but there was too much background noise due to activity close to the comet nucleus: hundreds of ‘false stars’ were registered and it took almost 24 hours before tracking was properly re-established.

In the meantime, a spacecraft attitude error had built up, resulting in the high gain antenna off-pointing from the Earth. Indeed, a significant drop in the radio signal received by ground stations on Earth was registered. Following recovery of the star tracker system, the off-pointing was immediately automatically corrected and the operations team subsequently saw a return to a full strength signal from the spacecraft.

However, issues with false stars were still occurring. Cross comparisons with other navigation mechanisms showed inconsistencies with the star trackers and some on board reconfigurations occurred. While attempting to reconfigure those, the same error occurred again leading this time to an automatic safe mode on Sunday afternoon. Safe modes occur when certain spacecraft parameters fall out of their normal operating ranges and the spacecraft automatically takes measures to preserve its safety. This also includes switching off the science instruments to protect them.

From Sunday to Monday, the operations team worked successfully to recover the spacecraft from safe mode to normal status.

Rosetta is currently on a trajectory over 200 km from the comet, but a manoeuvre has already been planned to bring back the spacecraft closer to the comet next week. It is expected that limited science operations will be resumed in the coming days and weeks.

The science and operations teams are currently discussing the impact of the recent navigation difficulties on the current planned trajectories, possibly resulting in further replanning in order to ensure that the spacecraft can operate safely as the comet activity continues to increase towards perihelion in August.

We will share further status updates when the information is available.

Update 2 April:
A manoeuvre was successfully executed yesterday (1 April) to bring the spacecraft from a distance of around 400 km to 140 km by next Wednesday. More details will be provided next week regarding subsequent trajectories.