For the past eight days, Rosetta has been sending signals to Philae and listening for a response, but the lander has not yet reported back. This report is provided by the German Aerospace Center, DLR. 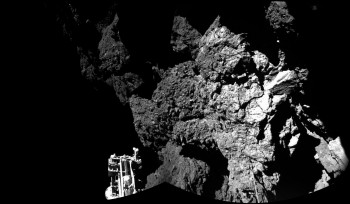 Philae’s view of the cliffs at Abydos – one of the lander’s three feet can be seen in the foreground.
Credits: ESA/Rosetta/Philae/CIVA

Perhaps it is still too cold for the Philae lander to wake up on Comet 67P/Churyumov-Gerasimenko. Maybe its power resources are not yet sufficient to send a signal to the team at the DLR Lander Control Center. On 12 March 2015, the Rosetta orbiter began to send signals to the lander and listen for a response, but Philae has not yet reported back.

“It was a very early attempt; we will repeat this process until we receive a response from Philae,” says DLR Project Manager Stephan Ulamec. “We have to be patient.”

On 20 March 2015 at 05:00 CET, the communication unit on the Rosetta orbiter was switched off. Now, the DLR team is calculating when the next favourable alignment between the orbiter and the lander will occur, and will then listen again for a signal from Philae. The next chance to receive a signal from the lander is expected to occur during the first half of April.

After it landed on Comet 67P/Churyumov-Gerasimenko on 12 November 2014, Philae operated continuously for 54 hours; all 10 instruments were used and sent data back to Earth. Then, the lander’s battery was exhausted and Philae went into hibernation at its rather shadowed location. Now, it needs an internal temperature above -45 degrees Celsius and at least five watts of power to automatically turn on. Until it can generate a total of 19 watts, it cannot send signals to Earth via the orbiter.

For the months of January and February, the engineers at DLR could definitely rule out the ending of hibernation: “Our simulations clearly showed that Philae would still be too cold to reawaken,” says Koen Geurts, a member of the control room team at DLR.

The engineers saw a first, albeit early, chance in March, when the comet and the lander would be about 300 million kilometres from the Sun – and the amount of solar radiation had nearly doubled when compared to the previous November. 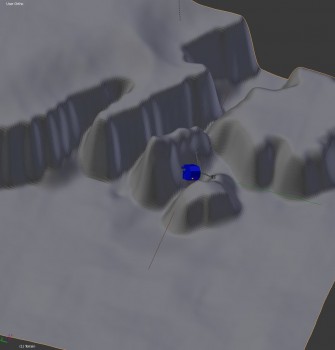 The likely position of Philae in a visualisation of a topographic modeling of the comet’s surface. Credits: ESA/Rosetta/Philae/CNES/FD

The lander team at DLR is planning the next attempt to communicate with Philae in April. For this, the orbiter must be in a suitable orbital configuration and range with respect to the lander to allow contact. In addition, Philae must be exposed to sunlight and be generating sufficient power to listen for the signal from the orbiter and be able to respond.

“These conditions must last for at least 45 minutes, because Philae only operates its receiver every 30 minutes after awakening,” explains Geurts.

Waking might be more likely in April, because the team at the Lander Control Center has sent new command sequences to Philae six times, with the primary purpose of instructing the lander to most effectively divide the available solar power between heating and communications. The last time the lander was instructed was on 17 March 2015 at 12:30 UTC, using ‘blind commanding’ to optimise its energy usage.

“We are sure that the communication unit on the orbiter worked, but whether Philae has received the new commands, we do not yet know,” says Geurts. It could be that the lander is already awake but does not yet have enough power to transmit a response; in this case, Philae could still receive the commands and execute them.

By the summer, when the comet is much closer to the Sun, the team is hoping to see signs of life from the lander and to receive data regarding the condition of Philae. What is the internal temperature of the lander? Are all its systems working correctly or has the hibernation at very low temperatures had unwanted consequences? How much solar radiation, and thus power, is it receiving? Is the battery charging?

After the data is carefully evaluated to determine the ‘health’ of Philae, the plan is to begin using its instruments and shift work in the DLR Lander Control Center will resume. Once the lander is awake, it will carry out its tasks – Geurts is certain: “Philae is configured in an optimal way for on-comet survival.”