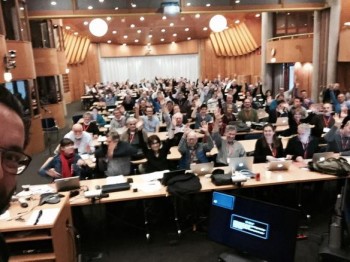 The Rosetta Science Working Team (SWT) met for the 40th time earlier this month, this time at ESTEC in Noordwijk, Netherlands.  This meeting was attended by principal investigators and co-investigators of the instruments and other researchers but also science operations personnel and staff from the mission operations team. This week the main topics discussed were the science of the mission so far, science operations and new trajectories going forward, and updates on the state of the health of the experiments and the spacecraft.

Compared to our predictions and expectations, the activity of the comet is slightly lower than expected and this was one of the main points of discussion at this SWT. The impact is that this means we could potentially be flying the spacecraft closer to the comet. However, given the overall constraints on flight around the comet, there are only a few things that can be changed in the short term. After the landing in November 2014, we’ve performed many terminator orbits (terminator is the line dividing day and night), and those have included circular orbits – what we call ‘bound’ orbits, where the spacecraft is gravitationally bound to the comet, the way a normal orbit around any other planetary object is done. 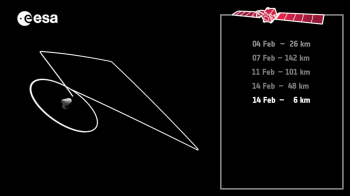 We have stayed away from more active areas of the comet in general, so there is also some concern that we might have just sampled the region of the comet that is expected to be of lower activity. However, most recently we have started flying farther away from the comet, as the period for doing bound orbits disappeared, and swooping closer in a series of fly-bys. For example, the past four weeks included:

Since a comet has so little gravity, a critical issue for navigating around it is when the gas and dust of the comet becomes so profuse that it starts to drag on the surfaces of the spacecraft and balance out the forces of gravity. Previously, the navigation team at the Rosetta Mission Operations Center (RMOC) considered the comet would be so active that the drag forces would become significant, and prevent ‘bound’ orbits after about the middle of February. The trajectories of the mission are designed using long term predictions to facilitate scientific operations but mean changes in the short term are not possible. Recently however, following a request from the science working team, the navigation team came up with a new scheme that takes advantage of the experience we have had in the terminator orbits. The proposed trajectories are designed to simply remain as close as possible to the comet which is great for some science observations, but at the same time also preclude exploration at different phase angle (angle of sunlight illumination), as the comet changes seasons from northern hemisphere summer to southern summer, which restricts other science. 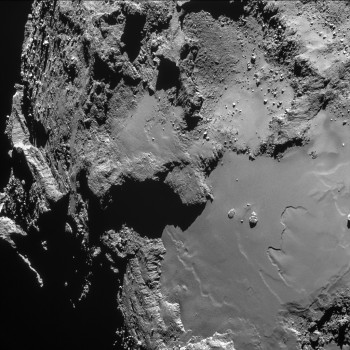 The ability to get really close to the comet nucleus for long periods of time allows those instruments that collect samples within an aperture to sample even more primitive material. The new scheme would enhance the ability of in situ instruments to gain signal as the spacecraft dipped closer, but the ability to study the nucleus under changing lighting conditions (particularly when the southern hemisphere starts to be exposed in southern summer) would be reduced. The SWT discussed the proposal at length and concluded that an approach in which terminator orbits are combined with those that can study lower phase orbits is the best compromise.

Observing 67P/C-G from Earth
As part of the SWT week, splinter workshops included that of the ground-based observing campaign, let by Colin Snodgrass, a UK cometary scientist at the Open University who leads (along with colleagues at ESO) the professional ground based campaign group (https://www.rosetta-campaign.net). Both amateurs and professionals are welcome to the meeting. The comet is currently behind the Sun, and will not be visible to professional ground-based observers until about June 2015 (just before perihelion). It is the hope that amateur astronomers will be able to observe the comet starting in the April-May timeframe. The US Rosetta Project manages the amateur ground-based observing program on behalf of the project. A new website is being designed, with a welcome page for amateur astronomers who are interested in participating in this exciting campaign. Web pages will soon* be introduced at the JPL Rosetta web site, and a form for amateurs to fill out to register for the program. Instructions for how amateurs can upload (FITS Format) pictures will be included in a hand-book at that time.