With today’s CometWatch entry, we take a dip into the past, presenting a single frame NAVCAM image obtained on 17 October 2014, when Rosetta was in a bound orbit around Comet 67P/Churyumov-Gerasimenko. The image was taken from a distance of 10.0 km from the centre of the comet, and at that distance, the resolution of NAVCAM is 85 cm/pixel and the full field of view spans 870 metres. 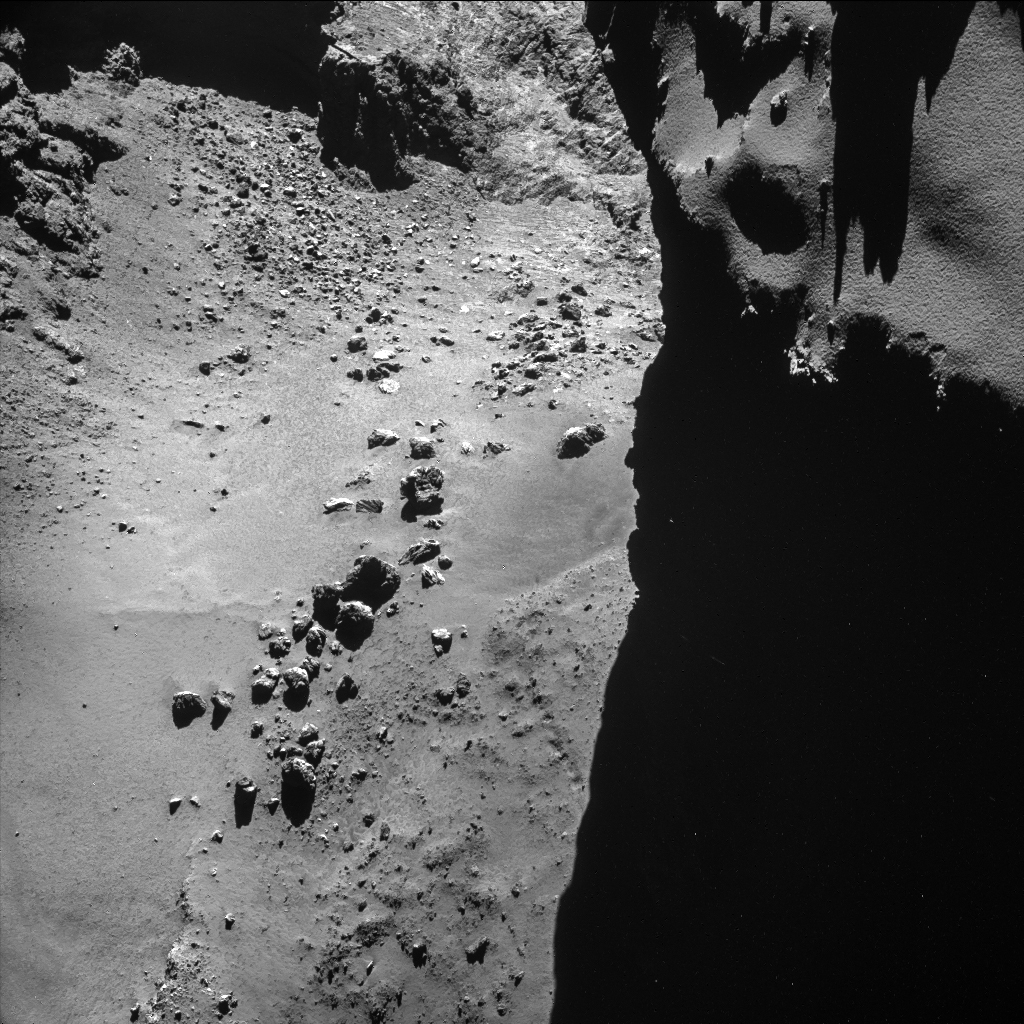 The Hapi region on the ‘neck’ of Comet 67P/C-G, viewed by Rosetta’s navigation camera (NAVCAM) on 17 October 2014 from a distance of 10.0 km from the comet centre. The image has been processed in Lightroom to enhance the surface textures and to eliminate vignetting in the lower-left corner. Credits: ESA/Rosetta/NAVCAM – CC BY-SA IGO 3.0

The image offers a stunning view on the row of ‘boulders’ lying in the Hapi region on the comet’s neck. A small portion of the Ma’at region on the smaller ‘head’ lobe of the comet is visible in the top-right corner, casting a shadow down the lower right side.

As shown in this graphic featuring a full comet view taken by NAVCAM on 19 August 2014 from a distance of about 79 km from the centre, Hapi is a narrow region connecting the large and small lobes of the comet. The smooth appearance of Hapi suggests that it is likely covered in dust and other material that might have fallen from either of the two lobes, including the small and large boulders featured in detail in today’s CometWatch. 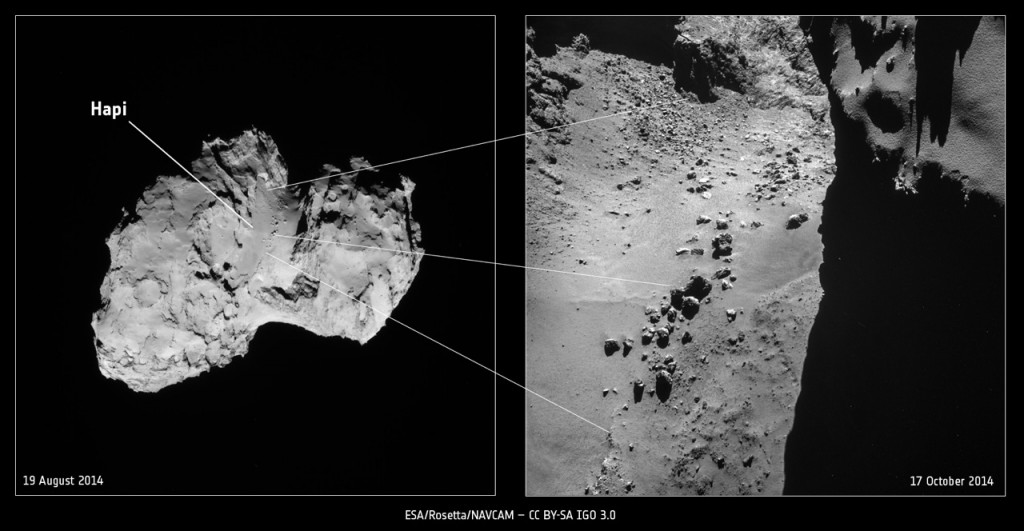 Hapi also appears to be the most active region on the comet’s surface so far, and last week’s colour image from OSIRIS shows this region to be somewhat bluer than the rest of the comet, suggestive of ice just below the surface. Observations with the VIRTIS imaging spectrometer should be able to confirm or contradict this hypothesis. 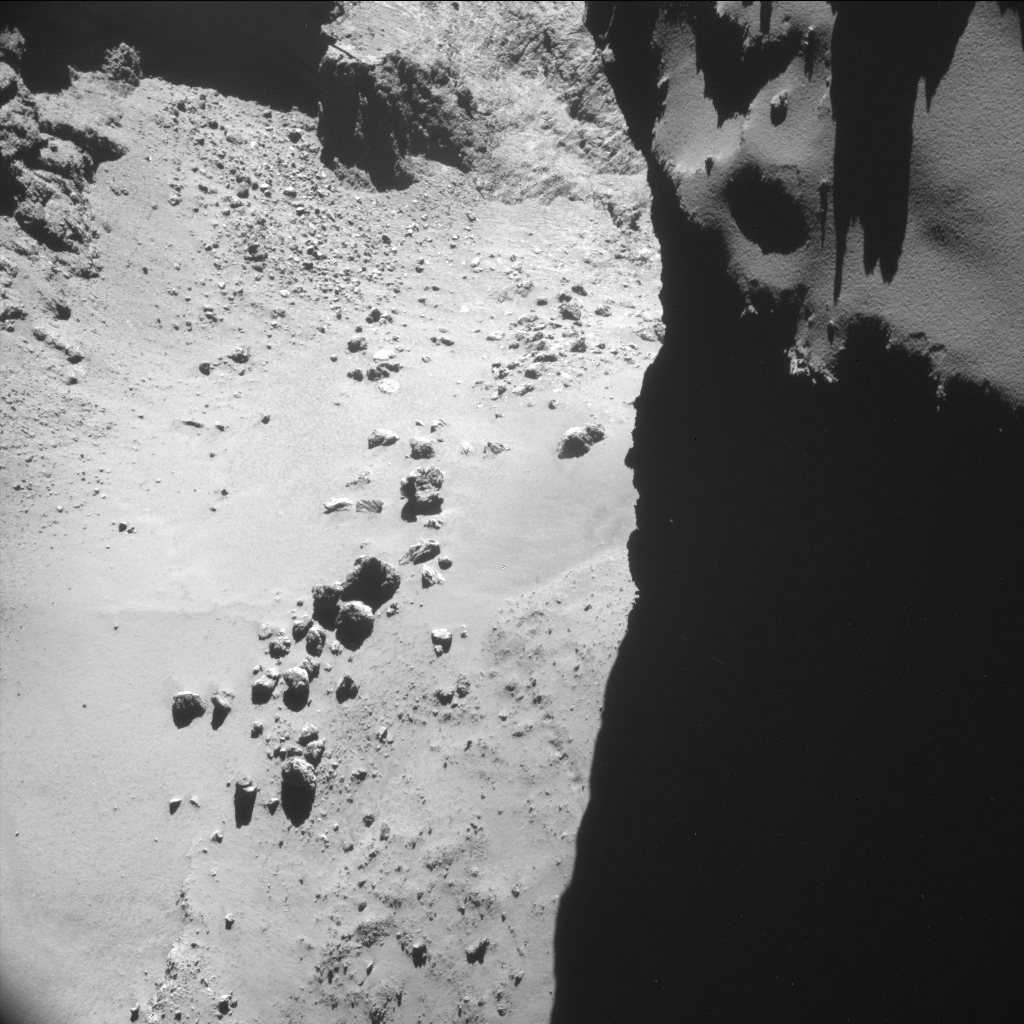