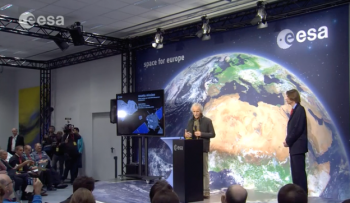 Jean-Pierre Bibring (centre) during the 13 November 2014 press briefing, during which he presented new images returned from the lander. Click to watch video.

For years we dreamt of visiting a comet, to perform in situ analyses of a pristine Solar System object. For Philae, the first giant challenge was to land. We always knew that achieving our scientific goals would require us to face extreme conditions, so cold and unpredictable would be the comet environment at such distances from the Sun – nearly 450 million kilometres around landing day. Our mission was expected to present enormous risks: the reality was even tougher.

All scientific operations planned for the descent up to 10 hours after touchdown had been preloaded, ready to be run in an automated fashion. They all were performed as planned. They in part took place during the two-hours Philae spent bouncing before getting to rest, offering an unexpected add-on sequence of measurements. They greatly contributed, revealing physical properties of the nucleus surface, which seems to consist of a rigid (icy?) layer below a dust cover. It could result from sintering through the thermal cycles experienced as the comet passes through perihelion every ~6.5 years – a situation MUPUS learnt about when it tried to hammer into the ground. 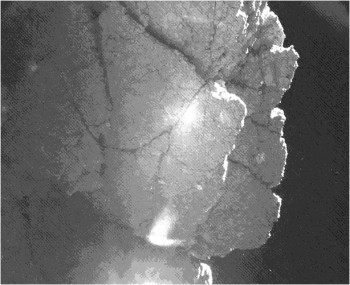 The subsequent ~50 hours of operations, constituting the “first science sequence” (FSS), were supposed to be run with the non-rechargeable batteries primarily, the content of which would not be known until they die. The initial FSS plan was to start with drilling (with SD2) and analysing subsurface samples (with COSAC and PTOLEMY); imaging the surface below Philae (ROLIS); deploying other mechanisms to measure temperature profile (MUPUS) and surface composition (APXS), and monitoring physical properties (SESAME). This sequence required Philae to be rigidly anchored to the surface, which did not happen. We thus had to quickly execute a major reshuffling and adaptation of the overall sequence, balancing the risks and the desired goals to acquire as many scientific results as possible.

As a key step, to characterize the position/orientation and location of Philae, a new set of CIVA panorama images was commanded. It was executed and received early on 13 November. The images were astonishing. Philae had indeed landed, and one could clearly see parts of the lander (feet, CONSERT antenna) resting on the comet nucleus. We were face-to-face with pristine cometary constituents –the dream had become reality! But, at the same time, the images demonstrated that Philae had rested in a hole with an odd attitude, one foot up, and in a site largely shadowed by surrounding boulders/cliffs: greatly unfavourable for energy, as well as for surface access of deployable systems.

A sequence of operations coping with this situation was designed and uploaded, enabling most investigations to be run, from the least to the more risky. Most investigations were reduced in duration, and some were not enabled, by potential lack of energy. The sequence ended with a rotation of Philae body, post-monitored by a ROLIS image, to try to improve the energy budget on the solar cells. Then the system was shut down to properly enter hibernation. All was executed as planned; the overall duration of the descent and the FSS lasted 63 hours, almost exactly as expected.

Contrasted outcomes were achieved. Access to the surface was compromised: it seems that the drill (SD2), although it operated perfectly, did not get and distribute a sample, preventing COSAC from its analysis, and that APXS did not touch the ground. Time and energy limitations prevented some investigations to be operated (such as CIVA-M): there is a cost of not having been anchored at touchdown! However, during the descent, the touchdown and bouncing phases, and the reshuffled FSS, an enormous amount of critical data were collected; they are currently being analysed, and the results are being prepared for publication. In very broad terms:

-ROMAP monitored the evolution of the magnetic field from kms down to a few cms from the surface, inferring the degree of magnetization of the constitutive cometary materials;

-ROLIS imaged the targeted landing site from 70m down to 9m altitude, then the surface below Philae, providing a view of the cometary surface materials from metre to submillimetre-scale;

-MUPUS monitored the thermal environment, and the surface thermal properties and constrained the hardness of the ground;

-CONSERT acquired the evolution of the radio waves through the nucleus during one complete rotation;

-PTOLEMY and COSAC analysed the composition of the material mobilized at touchdown, mainly made of carbon-rich species;

-CIVA imaged the site in which Philae rests.

The “Long Term Science” (LTS), to be run on batteries recharged by solar panels whenever feasible, was always considered a major contributor of the overall Philae science mission. With the unexpected landing configuration, which prevented getting the original LTS from being performed immediately after the FSS, the next phase of science operations is dramatically awaited, as a means to achieve all Philae science goals – and possibly more. 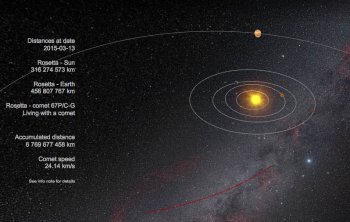 For Philae to be able to resume activities requires a sufficient energy budget. Two factors may contribute to an increase in energy with respect to the situation in mid-November: the comet heliocentric distance, which decreases substantially with time, and the seasonal evolution, which may bring the solar elevation over the surrounding boulders/cliffs. The former is well known, and indicates favourable slots around June/July. The latter is largely unknown, with the present lack of knowledge of the precise lander location, and thus of the surrounding topography. It has thus been decided to stay on the optimistic side, betting on a favourable seasonal effect.

The largest uncertainty though is whether Philae’s internal systems have suffered from the terribly low temperatures of the environment. Is the daily solar input on Philae sufficient to have enabled its survival to operate again?

Preparing for Philae’s resuming activity and continuing scientific operations is presently the focus of all Philae teams. Wake-up tries are now being executed; a new chapter of the Philae thriller should start soon!

Click here for more on the current “Listening to Philae” activities.