This post is based on information provided by the OSIRIS team at the Max Planck Institute for Solar System Research (MPS) in Germany.

If it could be seen with the naked human eye, the nucleus of Comet 67P/Churyumov-Gerasimenko would be a dark grey all over. With its array of specialised filters, however, Rosetta’s scientific imaging system OSIRIS can discern tiny differences in reflectivity at different wavelengths across the comet’s surface. In turn, these differences can reveal clues as to the local composition of the comet.

The image shown here focuses on the Hapi region of the comet. Hapi is located in the neck between the comet’s two lobes and has in the past months proven to be particularly active, the source of many of the spectacular jets of dust and gas seen in the wider-view images. 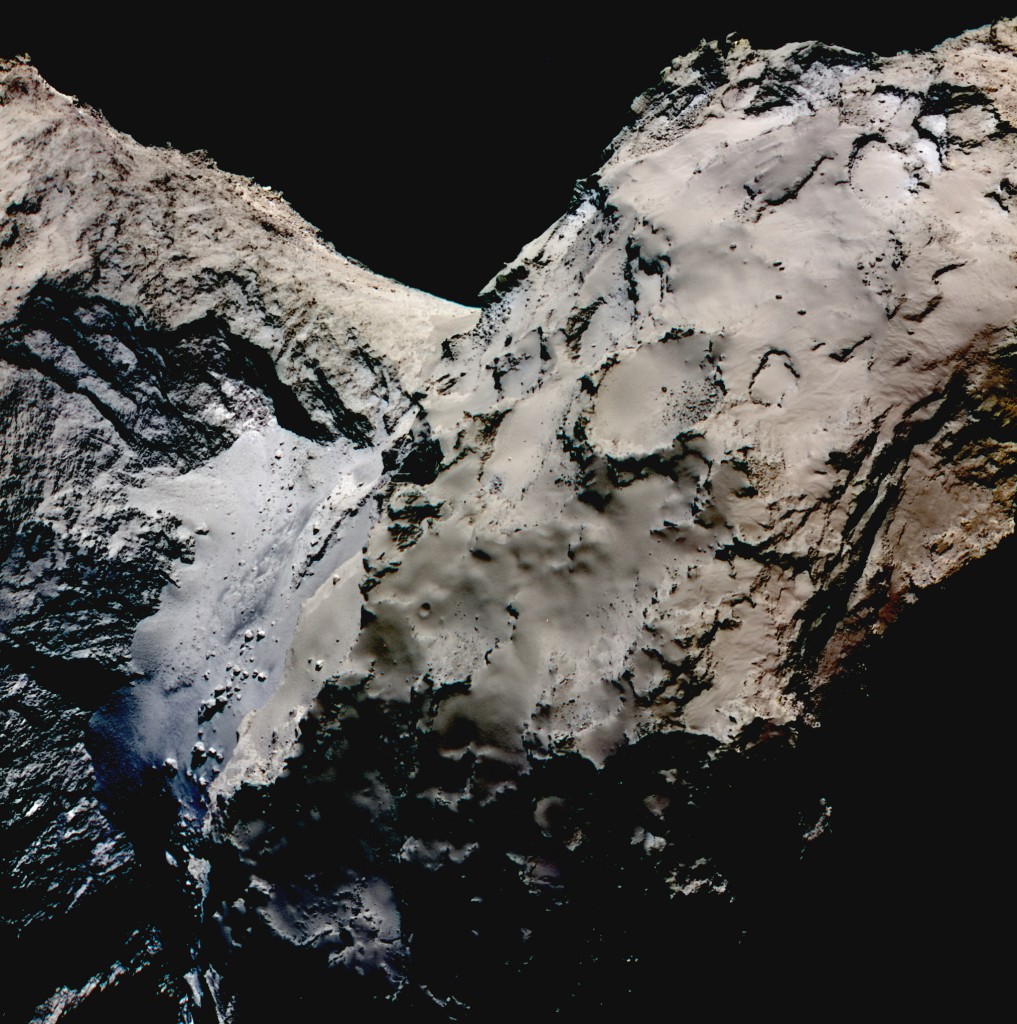 False colour image showing the smooth Hapi region connecting the head and body of Comet 67P/Churyumov-Gerasimenko. Differences in reflectivity have been enhanced in this image to emphasise the blue-ish colour of the Hapi region. The scientific data was acquired on 21 August 2014 by the scientific imaging system OSIRIS with broad-band filters centred at 989, 700, and 480 nanometres. These images have been combined here as red, green, and blue, respectively, and the composite has been processed to enhance the slight colour differences. During these observations Rosetta was 70 km from the comet, and the corresponding spatial resolution is 1.3m per pixel. Credits: ESA/Rosetta/MPS for OSIRIS Team MPS/UPD/LAM/IAA/SSO/INTA/UPM/DASP/IDA

Three separate OSIRIS images were taken through three broad-band filters centred at 989, 700, and 480 nanometres, respectively. These were then combined as red, green, and blue, respectively, to make a colour image.

Because the images were taken sequentially, there was some comet rotation and spacecraft motion between them, meaning that accurately aligning the images before they are combined is non-trivial. Small errors in this process can lead to small-scale colour features which are not real, so it is important to focus on the large-scale colour variations between Hapi and neighbouring regions as an indication of broad compositional differences.

It is clear from this image that indeed Hapi reflects red light less effectively than most other visible regions on the comet and thus appears slightly blue-ish. Importantly, this blue-ish colouring might point to the presence of frozen water ice at or just below the dusty surface of Hapi.

“Even though the colour variations on 67P’s surface are minute, they can give us important clues,” says OSIRIS Principal Investigator Holger Sierks from the Max Planck Institute for Solar System Research (MPS) in Germany.

The scientists believe that the distinct reflectivity properties of Hapi hint at a higher abundance of frozen water at or near the surface in this region. The colour differences are very slight and could be explained by the presence of just small amounts of water ice peeking through the dusty shroud that covers much of 67P/C-G at the moment. While some dust present on the surface may be due to local depositions of dust associated with activity, some is also likely left over from the comet’s last passage around the Sun. Much of this dust shroud is expected to be blown away as the comet becomes even more active closer to the Sun later this year.

Previous missions had observed similar features on comets Hartley-2 and Tempel-1, and also associated a blue-ish spectrum with the presence of frozen water. While OSIRIS can only take images in a limited number of spectral bands, Rosetta is equipped with other instruments including VIRTIS, capable of making an unambiguous identification the spectral signature of frozen water molecules in infrared reflection.

“We are excited to see whether our suspicion will be confirmed,” says Sierks.

As the smoother surface of the Hapi region gives way to the more rugged terrain of the surrounding areas, the reflectivity changes, too.

“We see that the reflectivity properties are closely correlated to the surface morphology,” says OSIRIS scientist Sonia Fornasier from the Paris Observatory.

The Hapi region differs from the rest of 67P/C-G’s surface in many respects. Not only is it much smoother, it is one of the main sources of activity in the comet’s northern hemisphere at the moment – early dust jets originated there.

“During perihelion, when 67P heats up significantly, Hapi will be hidden in northern polar night. Outbound on the comet’s orbit, from March 2016, Hapi will receive solar heat again,” says Fornasier.

“At this large distance from the Sun, it will then be very cold. Hapi might therefore be a region that has been able to retain ices on its surface during past orbits around the Sun and has thus enough ‘fuel’ left to create the fireworks of activity we have witnessed in the past months.”