Images from the OSIRIS scientific imaging camera taken during the close flyby on 14 February have now been downlinked to Earth, revealing the surface of Comet 67P/C-G in unprecedented detail, and including the shadow of the spacecraft encircled in a wreath of light. 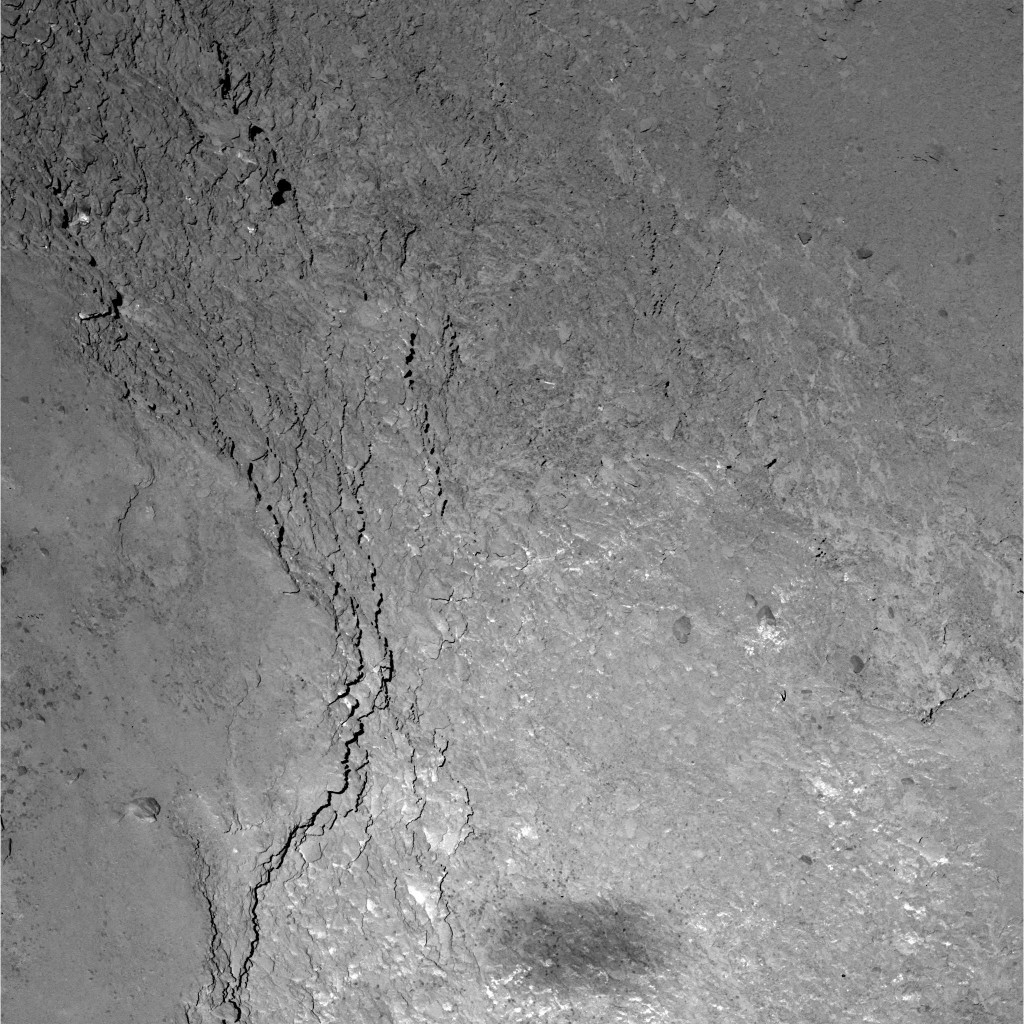 Close-up view of a 228 x 228 m region on the Imhotep region on Comet 67P/Churyumov-Gerasimenko, as seen by the OSIRIS Narrow Angle Camera during Rosetta’s flyby at 12:39 UT on 14 February 2015. The image was taken six kilometres above the comet’s surface, and the image resolution is just 11 cm/pixel. Rosetta’s fuzzy shadow, measuring approximately 20 x 50 metres, is seen at the bottom of the image.
Credits: ESA/Rosetta/MPS for OSIRIS Team MPS/UPD/LAM/IAA/SSO/INTA/UPM/DASP/IDA 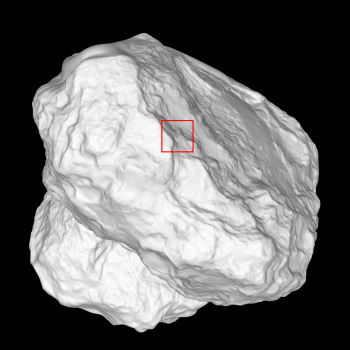 This OSIRIS shape model is marked with the position of the narrow-angle camera field of view taken during the 14 February flyby. Credits: ESA/Rosetta/MPS for OSIRIS Team MPS/UPD/LAM/IAA/SSO/INTA/UPM/DASP/IDA

The image released today shows an area near the edge of the comet’s “belly” close to the Imhotep-Ash regional boundary, where a mesh of steep slopes separates smooth-looking terrains from a craggier area. The image was taken from a distance of 6 km from the comet’s surface and has a resolution of 11 cm/pixel. It covers an area of 228 x 228 m.

To better identify the exact region on the comet, in the graphic below we compare the new OSIRIS narrow-angle camera image with a wider view of the comet, along with the NAVCAM image taken at 14:15 UT,  noting that there are uncertainties in the distance to the surface and change in perspective between the images. Indeed, while the match on the smooth-looking region at the bottom of the NAC image in the displayed orientation is good, it is harder to match the upper half because of the lack of shadows in the NAC image, and because the geometry/viewing perspective has changed between the images. This means that the NAC image would have to be distorted and “draped” over the surface to fit the NAVCAM properly. To better understand the relationship of the images, you can download a short movie that fades through the images here. 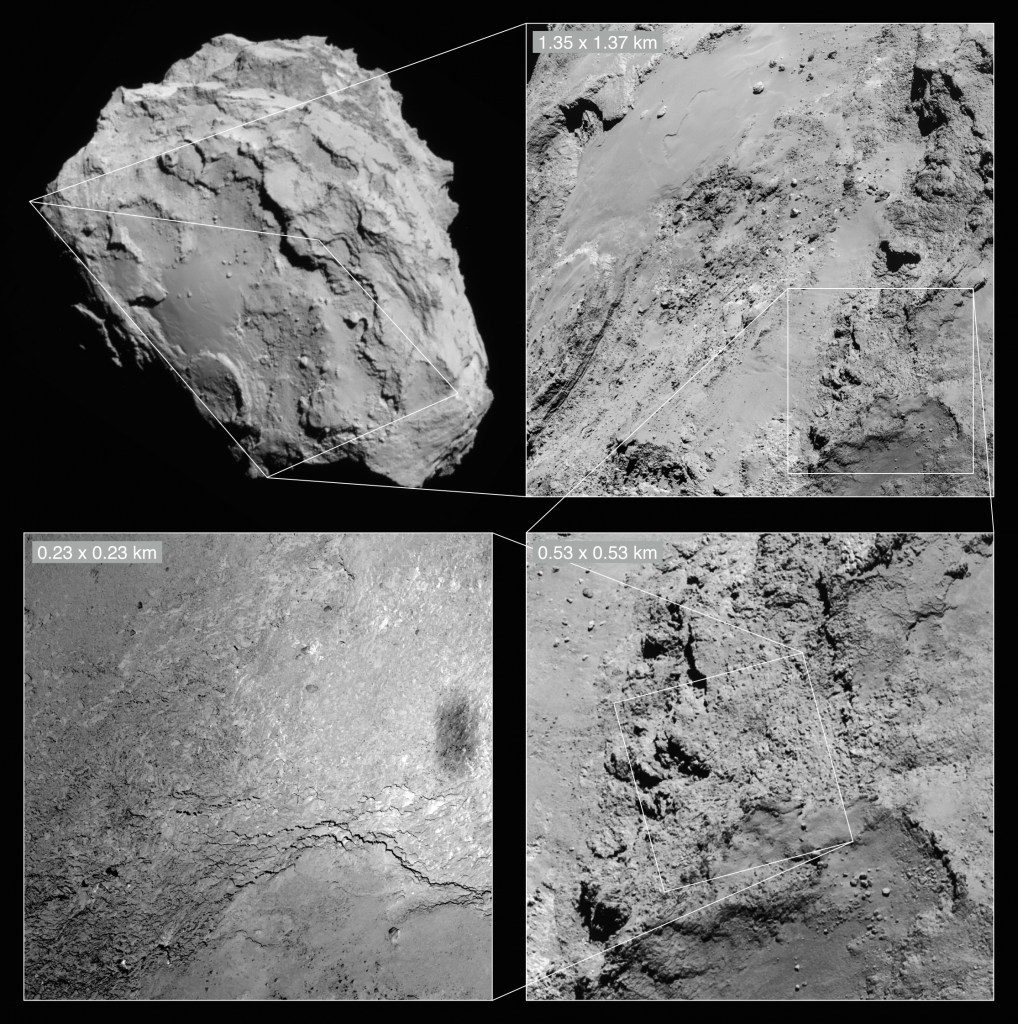 The OSIRIS narrow-angle camera image from the close flyby shown here in context with a NAVCAM image. Note the region outlined in the upper left is approximate due to the change in perspective.
Credits: NAVCAM: ESA/Rosetta/NAVCAM – CC BY-SA IGO 3.0;
OSIRIS: ESA/Rosetta/MPS for OSIRIS Team MPS/UPD/LAM/IAA/SSO/INTA/UPM/DASP/IDA

During the flyby, Rosetta not only passed closer by the comet than ever before, but also passed through a unique observational geometry: for a short time the Sun, spacecraft, and comet were exactly aligned. In this geometry, surface structures cast almost no shadows, and therefore the reflection properties of the surface material can be discerned.

“Images taken from this viewpoint are of high scientific value,” says OSIRIS Principal Investigator Holger Sierks from the Max Planck Institute for Solar System Research (MPS) in Germany. “This kind of view is key for the study of grain sizes.”

As a side effect of this exceptional observational geometry, Rosetta’s shadow can be seen cast on the surface of Comet 67P/C-G as a fuzzy rectangular-shaped dark spot surrounded by a bright halo-like region. 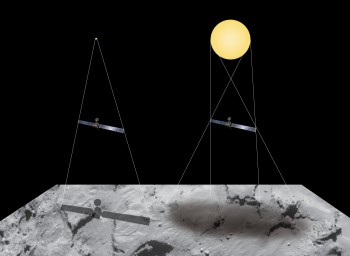 Graphic to illustrate the difference between how a sharp shadow is generated by a point source (left) and a fuzzy shadow by a diffuse source (right). Credits: Spacecraft: ESA/ATG medialab. Comet background: ESA/Rosetta/NAVCAM – CC BY-SA IGO 3.0

The shadow is fuzzy and somewhat larger than Rosetta itself, measuring approximately 20 x 50 metres. If the Sun were a point source, the shadow would be sharp and almost exactly the same size as Rosetta (approximately 2 x 32 m). However, even at 347 million km from 67P/C-G on 14 February, the Sun appeared as a disc about 0.2 degrees across (about 2.3 times smaller than on Earth), resulting in a fuzzy “penumbra” around the spacecraft’s shadow on the surface. In this scenario and with Rosetta 6 km above the surface, the penumbra effect adds roughly 20 metres to the spacecraft’s dimensions, and which is cast onto the tilted surface of the comet.

If you were standing on the surface with Rosetta high above you, there would be no place in the shadow where the entire Sun would be blocked from view, which explains why there is no fully dark core to the shadow.

Rosetta is not the first spacecraft to capture its own shadow in this way. In 2005, JAXA’s Hayabusa spacecraft captured its shadow on asteroid Itokawa. However, because Hayabusa was only a few tens of metres above the surface, the penumbral effect was much less, resulting in a sharper and darker shadow of the spacecraft.

Also, the comet surface surrounding Rosetta’s shadow on Comet 67P/C-G appears significantly brighter than the rest of the surface seen in the image. Scientists refer to this effect as the ‘opposition surge’ and it is commonly observed when highly-structured regolith surfaces on planets and moons are illuminated directly behind the observer. For example, astronauts on the lunar surface saw the effect surrounding their own shadows. The primary cause of opposition surge is ‘shadow hiding’. When the Sun is directly behind the observer, the shadows cast by small grains disappear from the perspective of the observer, hidden behind the grains themselves, leading to a pronounced increase in brightness. There may also be a contribution from coherent backscatter due to the retro-reflective properties of small dust grains.