CometWatch: The challenges of a close flyby

In today’s CometWatch post, we not only present a previously unseen NAVCAM image from the close flyby on 14 February, but we also reflect on some of the challenges encountered in operating in this new environment.

The image below is a single frame (1024 x 1024 pixel) NAVCAM image taken at 16:12 UT on 14 February, from a distance of about 15.3 km from the surface. The image scale is 1.3 m/pixel and the frame measures 1.3 km across. The image was taken over the Imhotep region on Comet 67P/C-G’s large lobe (see the supporting images below for context).

Compare it to the frame taken at 14:19 UT to see much of the same region at a different viewing angle, as the comet rotated and spacecraft moved during the two hours between the images. 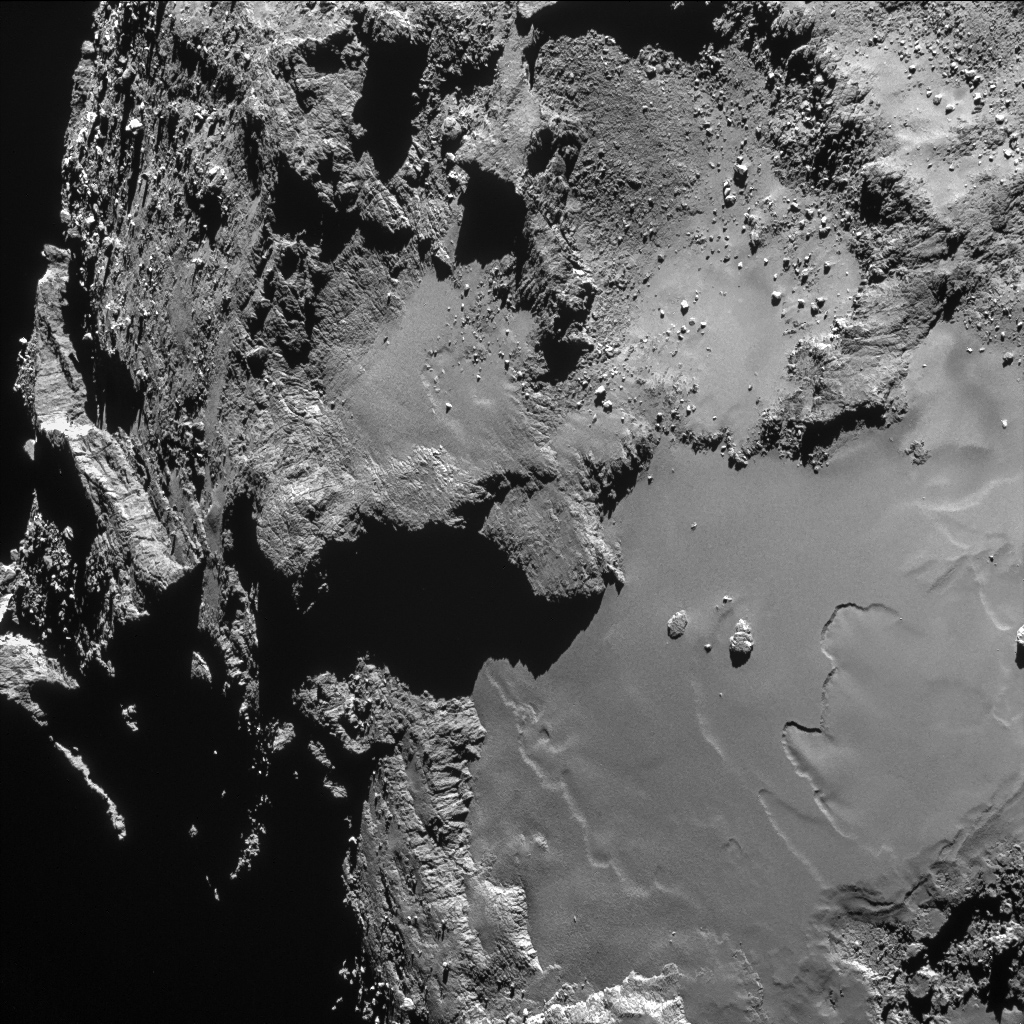 Single frame NAVCAM image taken at 16:12 UT on 14 February. The image has been lightly processed to remove vignetting and to increase the local contrast. Credits: ESA/Rosetta/NAVCAM – CC BY-SA IGO 3.0

The data acquired during Rosetta’s close flyby will provide incredible new details of the comet’s surface and near coma environment, complementing that collected earlier in the mission while on bound orbits. 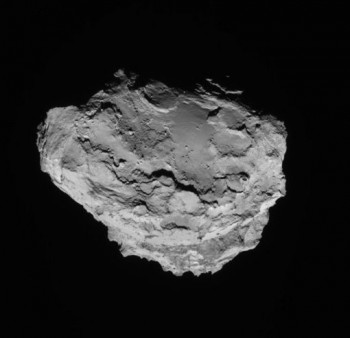 For the close flyby, Rosetta had to move away from the terminator (the division between day and night) and towards the sunlit side of the comet. (Check this video to get an idea of the trajectory.) This provided a good opportunity to perform unique science: the illuminated side is the most active, and the geometry was such that the spacecraft passed through the point where the Sun was directly behind Rosetta, allowing the reflection properties of the surface to be determined.

But flying closer to the surface means flying through denser regions of outflowing gas and dust, which results in the spacecraft and its large solar arrays being exposed to significantly more ‘drag’.

In general, Rosetta’s solar panels are oriented perpendicular to the Sun, to capture the most sunlight. Usually, terminator orbits are preferred, with the solar panels edge-on to the outflowing material to minimise the drag. But in this flyby geometry, the flat face of the solar panels was oriented more or less parallel to the comet’s surface and thus perpendicular to the outflowing material, maximising the drag. Imagine holding your hand under a stream of water – it’s like the difference between the relative ease at moving your hand through the stream edge on, thumb or little finger first, compared to doing it palm first. 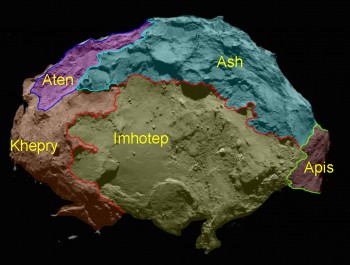 Annotated map of the ‘underside’ of the comet’s large lobe, showing the Imhotep region. Rosetta passed over this region at a distance of just 6 km during the 14 February flyby. Credit: ESA/Rosetta/MPS for OSIRIS Team MPS/UPD/LAM/IAA/SSO/INTA/UPM/DASP/IDA

However, for the 14 February event, it seems that flying this close to the comet also had another effect: the spacecraft effectively couldn’t see the usual number of “signposts” for navigation, namely stars.

The operations team report that already two hours before closest approach, the spacecraft began to lose the ability to identify enough stars to track correctly, and occasionally locked onto “false” stars – a result of the comet’s coma environment. This resulted in the spacecraft switching to some backup units (including its backup star tracker) in order to try and address the issue. However, the backup also subsequently experienced tracking problems due to the lack of stars in the field-of-view during the flyby.

“With a lot of luck, the spacecraft did not end up in ‘safe mode’,” says Sylvain Lodiot, Rosetta spacecraft operations manager. “Although in this case we could have recovered the spacecraft and resumed operations as planned, the science instruments would have automatically switched off in the meantime. By the time they had been switched back on, we would have been relatively far away from the comet again.”

“Doing science during a close flyby like this is not easy, and we are looking at ways to better prepare for future flybys so that we can maximise science while not jeopardising the safety of the spacecraft,” adds Matt Taylor, ESA’s Rosetta project scientist.

Indeed, the team are discussing plans to fly through one of the comet’s jets this summer, taking into account the lessons learned from this first close flyby.

The original 1024 x 1024 pixel frame from today’s entry is provided below: 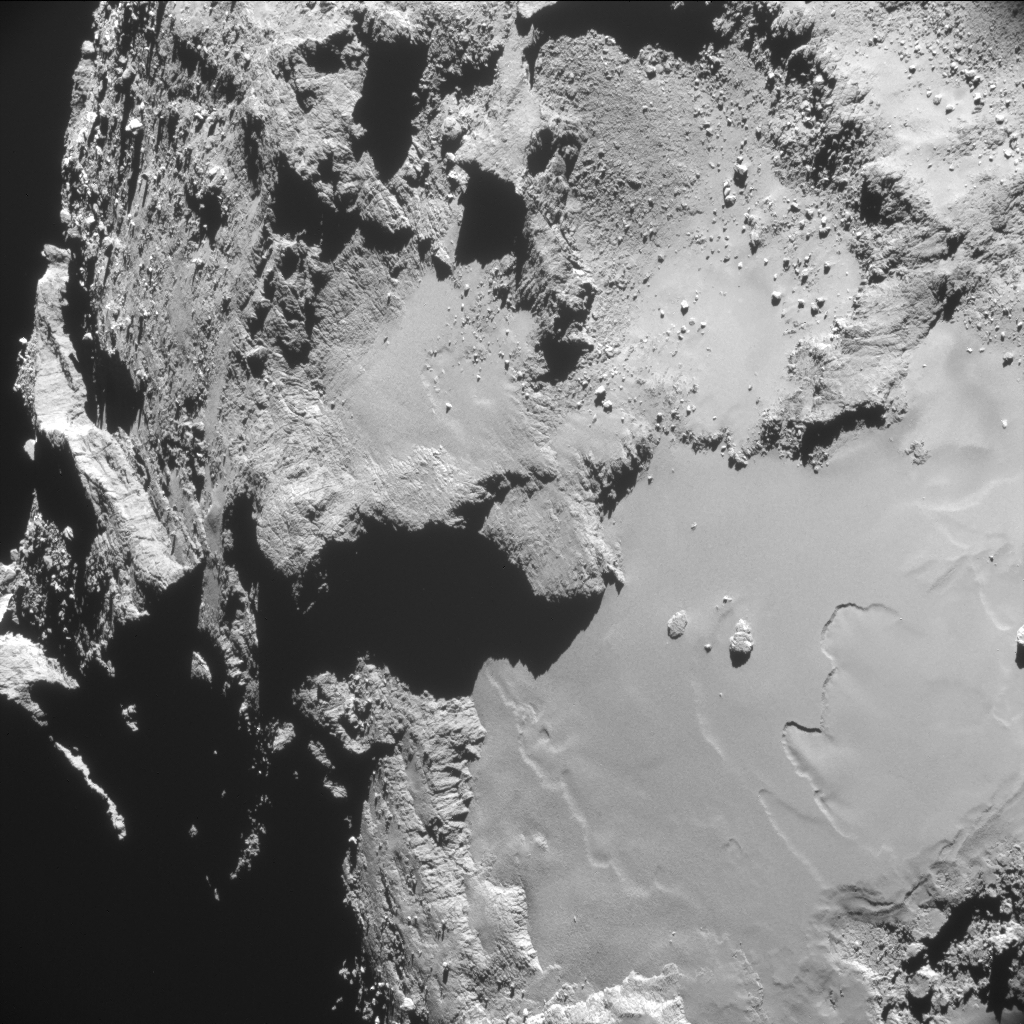