And away again – CometWatch 15 February

After Rosetta’s close flyby just 6 km from the surface of Comet 67P/Churyumov-Gerasimenko on 14 February, the spacecraft has once more moved away from the comet as part of its new phase of operations, reaching a distance of 255 km from the centre of 67P/C-G on 17 February.

Today’s CometWatch entry presents a single frame image obtained halfway along this latest leg, taken with Rosetta’s NAVCAM on 15 February from a distance of 125 km to the centre of 67P/C-G. The 1024 x 1024 pixel image frame has a resolution of 10.6 m/pixel and measures 10.9 km across. 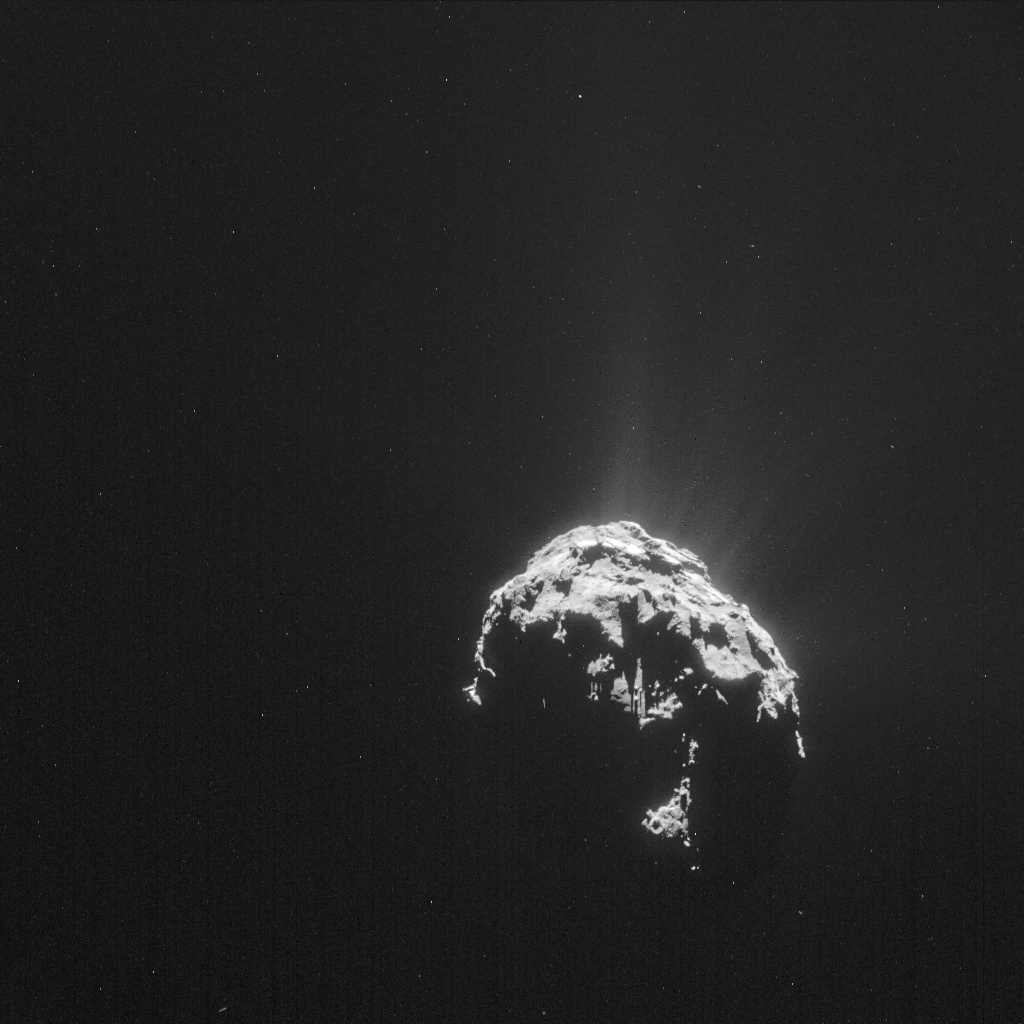 NAVCAM image of Comet 67P/C-G taken on 15 February from a distance of 125 km to the comet centre. The image has been processed to bring out the details of the comet’s activity. The exposure time of the image is 4 seconds. Credits: ESA/Rosetta/NAVCAM – CC BY-SA IGO 3.0

The view focuses on the large comet lobe, but a hint of the small lobe can be seen beyond it, in the distance.

The smooth Imhotep region is seen on the underside of the large lobe and partly cast in shadows. The image provides an interesting contrast to the close-up image of this region taken during the 14 February flyby. Even at this much larger distance, it is still possible to pick out the large boulder Cheops and a few of its companions casting very long shadows.

By making a careful adjustment of the intensity scaling in Lightroom, it has been possible to preserve the details seen in the bright comet, while also revealing a delicate fan of jets along the upper edge, likely emanating from the Hapi region on 67P/C-G’s neck.

After having reached 255 km from the centre of 67P/C-G on 17 February, Rosetta is now approaching the comet again. Today, 18 February, the spacecraft is about 200 km from the comet, moving along a new trajectory arc where the closest approach to the comet, next week, will be at a much larger distance than the previous one (about 55 km from the surface), as part of Rosetta’s campaign to sample the material flowing away from the comet at a range of distances.

The original 1024 x 1024 pixel image frame for today’s entry is provided below: