Rosetta is preparing to make a close encounter with its comet tomorrow, on 14 February, passing just 6 km from the surface.

On 4 February, Rosetta began manoeuvring onto a series of new trajectories that will align the spacecraft for this week’s encounter. The series of thruster burns are happening (or have happened) as follows (distances are indicated from comet surface):

The closest pass occurs over the comet’s larger lobe, above the Imhotep region (click on the image below to watch). 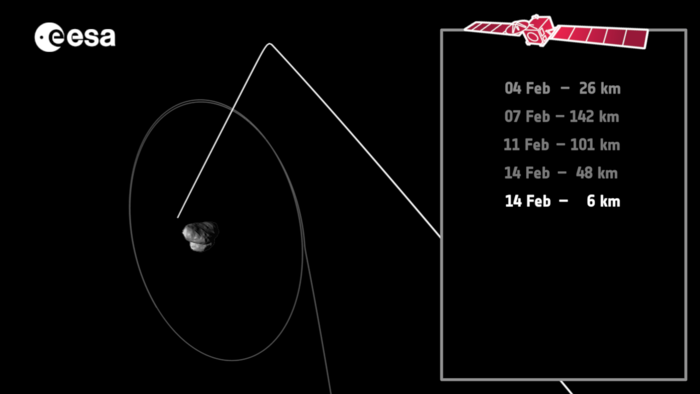 Note that, in the main science phase, Rosetta’s trajectory is being set by the Rosetta Science Ground Segment (RSGS) at ESAC, on a 16-week planning calendar (known as the LTP – the ‘long term planning’ process), and is fully optimised for the suite of instruments on board.

This means that 16 weeks before the start of each LTP cycle, RSGS proposes a trajectory for that LTP. This trajectory is then checked, against spacecraft and mission constraints, among other factors, at ESOC by the flight dynamics team.

While closest approach on 14 February is certainly a significant event for science observations, for the flight control team at ESOC, it’s a fairly routine operation and just one more activity during the main science phase.

Since the intense manoeuvring and operations of 2014, the flight control team have adopted a regular weekly planning cycle. This covers two ‘VSTPs’ (very short term plans) covering Wednesdays to Saturdays (planned on Mondays) and Saturdays to Wednesdays (planned on Thursdays). Specifically:

For the rest of the current mission plan in 2015, in fact, Rosetta will always conduct flybys, and, based on predictions of increasing cometary activity, can no longer be manoeuvred so close to the comet as to be in a gravitationally bound orbit.

The net effect is that the workload for mission planning has settled into a more or less predictable, if still challenging, cycle. And, when not at work at ESOC during the week, the flight control team remain on call day/night/weekends.

The flight dynamics team at ESOC take optical images five times a day using Rosetta’s navigation camera, the NavCam. These images are then used in the optical navigation process to reconstruct the position and trajectory of Rosetta with respect to 67P.

“The NavCam is crucial for relative navigation and knowing where we are with respect to the comet,” says Rosetta Spacecraft Operations Manager Sylvain Lodiot.

He explains that a set of parallel trajectory plans are maintained; one set describing the ‘preferred’ case (making certain assumptions on comet activity), and the other describing the ‘high activity’ case (which is a fall back solution in case the preferred case can’t be flown, and is further from the comet). Also, the operations teams, with the approval of the mission manager, would command a transition to the high activity case if the optical navigation process were to fail for any reason.

Beginning on 26 January, the comet and Rosetta entered conjunction season – a four-week period when both are orbiting more or less opposite Earth but on the other side of the Sun (see image below).

During ‘conjunction season’, the Sun interferes with the direct, line-of-sight radio signals transmitted between  Earth and Rosetta. 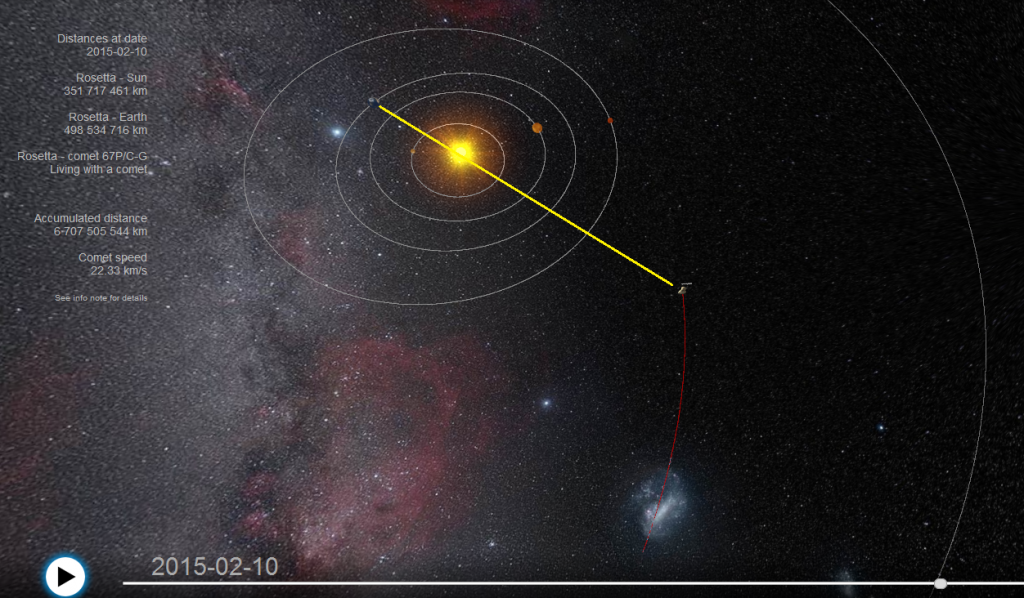 The yellow line indicates – approximately – the direct line of sight between Earth and Rosetta in February and into March 2015. Radio signals to and from the spacecraft are degraded by the Sun. Via https://sci.esa.int/where_is_rosetta/

“The practical effect is that data rates are reduced,” says Sylvain.

This limitation regulates how much data can be downloaded in any one ground station pass.

By June, the orbital geometry will have improved with the spacecraft much closer to Earth, and data rates via ESA’s Estrack stations will then steadily recover to the maximum rate of 91 kbps.

The continuing challenge for operations in 2015 is to manage and reconcile all requirements, coordinate between the various specialists that support the mission, book tracking stations for the right times, keep an eye on spacecraft status and health and ensure that the science plan is implemented in the best possible way, while respecting all spacecraft constraints.

“For the flight control team and the supporting specialists at ESOC, like flight dynamics and Estrack stations, the operations workload has gone down significantly compared to the comet approach phase and the landing last year,” says Sylvain.

“Nonetheless, we can’t afford any less attention – it’s still a challenge and will remain so for the rest of the mission.”