Based on the press release of the Max Planck Institute for Solar System Research, Germany.

Scientists from Rosetta’s OSIRIS team have been analysing the images of Comet 67P/Churyumov-Gerasimenko and comparing them to a thermal model to estimate how much material the various parts of the comet will lose through Sun-driven sublimation during one orbit. That is, as the Sun heats the comet, ices sublimate and the resulting gases drag dust into the comet’s coma.

The results predict that the southern half of the comet will undergo dramatic changes in the coming months, losing a surface layer several metres thick, while the northern half will likely be much less affected by the Sun-driven erosion.

Followers of this blog might be familiar with the geography of Comet 67P/C-G, but it’s worth stressing that the southern “hemi-comet” does not correspond to either of the comet’s two lobes. Indeed, the rotation axis goes through the comet’s “neck” and the equator runs along both lobes. 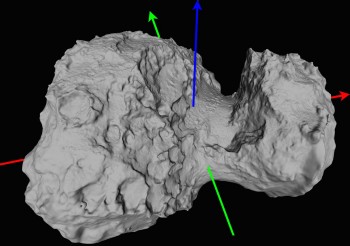 The blue arrow indicates Comet 67P/Churyumov–Gerasimenko’s rotation axis, and the red and green arrows display its equatorial x- and y-axes, respectively. Its spin axis is tilted by 52º.
Credits: ESA/Rosetta/MPS for OSIRIS Team MPS/UPD/LAM/IAA/SSO/INTA/UPM/DASP/IDA

For Earth, the rotation axis is inclined at an angle of about 23.5 degrees with respect to our planet’s orbital plane, giving rise to the seasons. The angle of inclination is much larger for Comet 67P/C-G: 52 degrees, but the comet still experiences seasons. But, together with the comet’s complex shape and highly elliptical 6.4 year orbit around the Sun, this leads to a very uneven distribution of summer and winter months across the surface of the comet. Indeed, some areas close to the poles even go through long phases of complete darkness or continuous illumination.

“We then expect the erosion there to pick up significantly,” says Holger Sierks, principal investigator of OSIRIS at the Max Planck Institute for Solar System Research in Germany.

The variation in illumination across the surface over the orbital period implies that the northern and southern “hemi-comets” experience very different levels of erosion driven by the Sun.

In the OSIRIS study, the scientists assumed that subsurface water-ice is covered by a very thin and extremely porous dust layer of only 50 micrometers in order to provide an estimate of the maximum loss of material for both hemispheres of the comet during one orbit.

“There is, of course, still some uncertainty in this value,” says Horst Uwe Keller, emeritus principal investigator of OSIRIS from the Institute for Planetary Research of the German Aerospace Center (DLR), who led the analysis. “It does, however, reproduce the erosion rates we see presently very well. We therefore see it as a good starting point for our model.”

The actual thickness of the dust layers is still to be confirmed – it may be several centimetres if not metres thick in places – but for the purpose of the model, a thin layer is assumed.

According to recent model calculations, the southern half of Comet 67P/C-G (right image) could lose a dust layer of up to 20 metres during one orbit. Due to the seasonal cycle of the comet, the northern half (left and centre images) is much less subject to erosion.
Credits: ESA/Rosetta/MPS for OSIRIS Team MPS/UPD/LAM/IAA/SSO/INTA/UPM/DASP/IDA

“Assuming that four times more dust is emitted than ice, our model leads to very different scenarios for the northern and southern hemisphere,” says OSIRIS scientist Stefano Mottola from the Institute for Planetary Research of the German Aerospace Center (DLR). “While during its short but intense summer the southern hemisphere may lose a surface layer measuring up to 20 metres in thickness, this value should be much smaller for the northern hemisphere. According to our estimations, only very few prominent peaks and cliffs may erode by more than ten metres over the course of one orbit.”

The scientists expect the southern side of the comet to change dramatically as it approaches perihelion in August. The team also notes that the insolation on the “neck” region between the comet’s two lobes is particularly weak; however, this region has displayed the strongest and earliest signs of dust activity in the past months, suggesting it might be characterised by a different composition to the rest of the comet.

“Quite possibly, 67P after perihelion will no longer be the comet we have grown used to in the past months,” says Sierks. “Witnessing these changes from up close will be an unsurpassed adventure.”