This blog post is contributed by Ian Wright and his colleagues from the Ptolemy team.

For scientists engaged with large complex projects like Rosetta, there is always a delightful period early on when, unbound by practical realities, it is possible to dream. And so it was that at one time the scientists were thinking about having a lander with the capability to hop around a comet’s surface. In this way it would be possible to make measurements from different parts of the comet.

Interestingly, this unplanned opportunity presented itself on 12 November 2014, when Philae landed not once but three times on Comet 67P/Churyumov-Gerasimenko.

The Ptolemy instrument on Philae is a compact mass spectrometer designed to measure the composition of the materials making up 67P/C-G, with a particular focus on organic molecules and mineral components. Earlier in 2014, Ptolemy had collected data at distances of 15,000, 13,000, 30, 20, and 10 km from the comet, while Philae was still attached to Rosetta.

But from 12 to 14 November, along with some other instruments on the lander, Ptolemy had the chance to operate at more than one location on the comet’s surface. 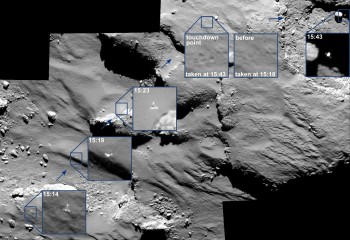 Ptolemy performed its first ‘sniffing’ measurements on the comet just after the initial touchdown of Philae. At almost exactly the same moment, the OSIRIS camera on Rosetta was imaging Philae flying back above the surface after the first bounce.

Later, once Philae had stopped at its final landing site, Ptolemy then made six subsequent sets of measurements, sniffing the comet’s atmosphere at the surface between 13 and 14 November. Finally, a slightly different experiment was also conducted on 14 November, which was completed only 45 minutes before Philae went into hibernation as its primary battery was exhausted.

For this “last gasp” experiment, the team used a specialised oven, the so-called “CASE” oven, to determine the composition of volatiles (and perhaps any particulates) that had accumulated in it. The Ptolemy team also used the same opportunity to reconfigure their analytical procedures, to see if they could make some isotopic measurements. Unfortunately, there was no chance to use Ptolemy in conjunction with SD2, as this was confined to the sister instrument, COSAC, given the limited power and time available.

The experiments conducted by Ptolemy on the surface of Comet 67P/C-G. Table courtesy of the Ptolemy team.

Because of the relatively high power consumption of Ptolemy, it was a race against the clock. The battery had to hold out, both to perform the measurements and to relay the data back to Rosetta and then home. For those involved, it’s hard to describe the shared emotions on that day, helplessly watching a voltage heading towards the end-stop.

Scientists from the Ptolemy team at the Lander Control Centre at DLR in Cologne, Germany, during the night between 14 and 15 November 2014, just before Philae went into hibernation. Photo courtesy of Ian Wright.

Nevertheless, the very good news is that Ptolemy definitely returned data from its various stops on the comet. However, the data are complex and will require careful analysis: this will take time. Also, because the instrument was operated in ways that hadn’t initially been planned for, it will be necessary to go back into the laboratory to run some simulated tests, to ensure that the on-comet data obtained in similar configurations can be understood.

In the first instance, however, the team will be concentrating on the data acquired immediately after the first touchdown. It will be fascinating to compare the rich spectrum of organic compounds detected by Ptolemy with the measurements made by COSAC about 14 minutes later.

The Ptolemy team has lots of questions. Exactly what organic compounds are present and in what ratios? How did things change between the various sets of measurements? What does these data tell us about the composition of the 10–20 cm depth of surface dust that got kicked up during the first bounce? And what can these materials tell us about the fundamental make-up of comets?

The team is looking forward to making these analyses over the coming months and sharing the results with you.