(This post was updated on 15.11.2014 with a revised version of the animated image from the Flight Dynamics team.)

The animated image below provides strong evidence that Philae touched down for the first time almost precisely where intended, a strong testament to the precision of the flight dynamics teams who planned Philae’s journey down to comet 67P/C-G.

It subsequently rebounded and, after touching down a second time, came to rest where it is now – a still unconfirmed location likely outside of these images.

The animation comprises images recorded by the navigation camera (NAVCAM) on board Rosetta as the orbiter flew over the (intended) Philae landing site on 12 November.

The images were taken at

The first image is thus 3 min 34 sec before touchdown. At this time, Philae was approximately 250m above the surface.

The second image is 1 min 26 seconds after first touchdown.  The touchdown is seen as a dark area. This dark area could be considered as strong indication that the lander touched down at this spot (possibly raising dust from the impact).

Both images are shown below, together with a third image, which is the same as the second, but also shows a green square; this is the predicted touch-down point after re-construction of the lander descent trajectory using various NAVCAM, OSIRIS WAC and OSIRIS  NAC images.

They were taken from a distance of about 15 km from the surface, giving an approximate scale of 1.3 m per pixel.

You can also clearly see the boulder identified in the ROLIS images just to the top right of the circle. In all images there are pairs of pixel artefacts (not the lander!).

The individual images are provided below; the animated GIF above makes use of the first two.

Editor’s note: Many thanks to Emily Lakdawalla of the Planetary Society for helping with the image processing of the image initially used with this blog post.

Also, Flight Dynamics have clarified that the green square in the image below is actually the computed touchdown point based on data taken during the deployment and descent to the surface, not the originally intended landing point (as stated in the previous version of this post). Nevertheless, it’s still very close to the latter, again a testament to the excellent work done by Flight Dynamics. 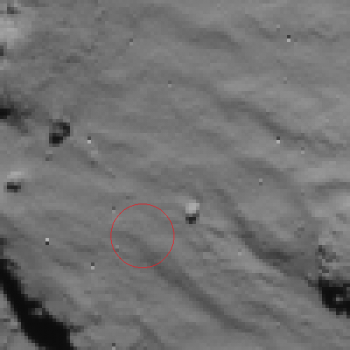 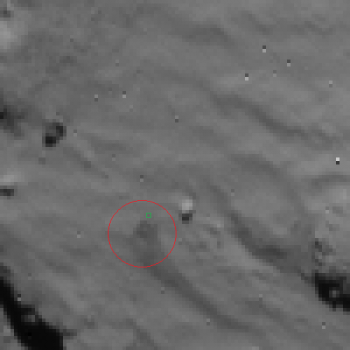