How (and where) is Philae?

The current status of Rosetta’s lander Philae was discussed live during a Google Hangout this afternoon, together with scientists and engineers from the mission teams at ESA and partner agencies. The teams are very happy about the lander and the successful functioning of all instruments that were operated so far.

As reported by Stefan Ulamec, the lander manager from DLR, last night a sequence of commands to operate a number of instruments was uploaded to the lander. The resulting data were downlinked earlier today and the scientists are currently analysing them and trying to figure out what they mean.

One of the instruments that was activated during this sequence is MUPUS, the MUlti-PUrpose Sensors for Surface and Sub-Surface Science, which has hopefully penetrated and hammered into the surface of the comet to test its thermal and mechanical properties.

Another instrument that was deployed during this sequence is APXS, the Alpha Proton X-ray Spectrometer, to probe the elemental composition of the comet’s surface.

They also conducted new measurements with CONSERT (COmet Nucleus Sounding Experiment by Radio-wave Transmission), an instrument that is operated both on the lander and the orbiter. The CONSERT data will be used to get a better estimate of the lander’s position, which has not been extactly identified yet.

The search for Philae is on, using not only CONSERT data, but also imagery from Rosetta – both from the OSIRIS imaging system and the navigation camera (NavCam) – as well as the data collected locally by the lander. 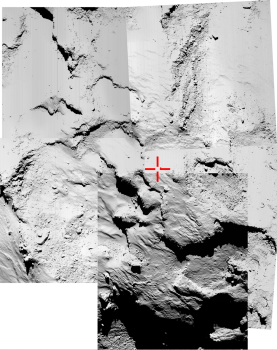 Holger Sierks, Principal investigator of OSIRIS, mentioned that images taken after touchdown are still to be downlinked; as soon as the images become available to the team, they will try to locate not only the lander’s current position but also its bouncing trajectory after the first touchdown. Meanwhile, they are continuing to image the surface of the comet with OSIRIS.

Another instrument that was operated on the lander is SD2, the sampling, drilling and distribution (SD2) subsystem, which was activated and started drilling. Philippe Gaudon, manager of Philae’s Science, Operations and Navigation Centre (SONC) at CNES, Toulouse, explained that the mechanism was working well, as they saw the drill go 25 cm below its base plate.

Shortly after, however, the link with Philae was lost – as expected, since the lander had moved below the horizon from Rosetta – so the results of this first drilling session should be available in the evening.

If successful, the first sample collected by the drill is scheduled to be fed to COSAC, the COmetary SAmpling and Composition experiment that will analyse the cometary material looking for organic compounds and measuring the chirality of the molecules.

A crucial uncertainty at the moment is the duration of the primary battery, which may run out before the end of this final block of the first science sequence. As explained by Valentina Lommatsch from the Lander Control Center at DLR, simulations that were run last night indicate that the battery might still have around 100 Wh left, which may be just enough to complete the sequence and relay back the data if the temperature of the battery does not decrease. The outcome will be known for sure only late this evening. 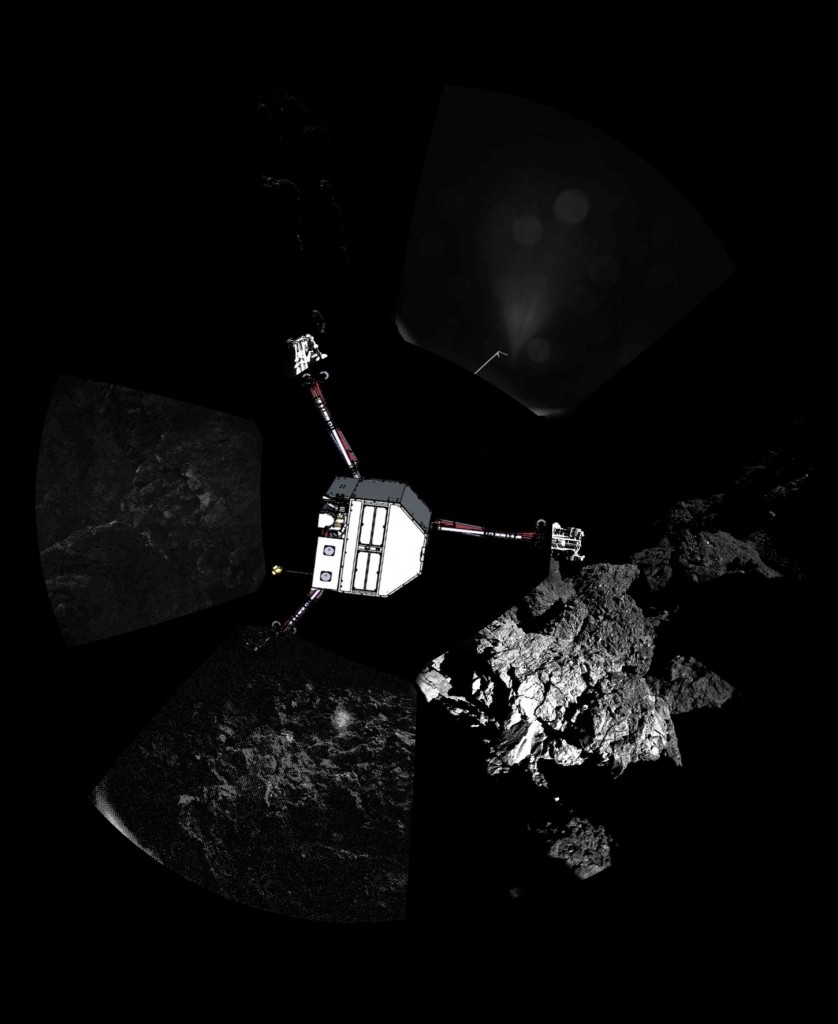 First comet panoramic on the surface of 67P/C-G, with an indication of the lander orientation superimposed on top of it. Credit: ESA/Rosetta/Philae/CIVA

As for the position of the lander, Valentina Lommatsch explained that all three of Philae’s legs are on the ground, but the sunlight received at the solar panels is very low, which is likely due to the local topography of the site of final touchdown. As reported by Stefan Ulemec, one of the panels is receiving sunlight for about one hour and twenty minutes and two more panels for about twenty-thirty minutes every comet day (which lasts 12.4 hours). They also confirmed that the lander has not moved since the third touchdown, after which the first CIVA-P panorama was taken.

The orbiter is doing great by the way, as reported by Andrea Accomazzo, ESA Rosetta Flight Director at ESOC. The team had to manoeuvre Rosetta to keep visibility with the location on the comet where Philae is, and the signal received from the lander is very stable. Of course, everyone is looking forward to finding its exact location on the comet’s surface and, most importantly, to hearing back from Philae tonight.

Matt Taylor, Rosetta project scientist at ESA, mentioned that both orbiter and lander have been performing outstanding measurements so far, at the very cutting edge of science. Everyone’s looking forward to the first scientific results, which will be presented next month at the Planetary Sciences Section of the American Geophysical Union.

Looking forward to the scientific output of the mission are also the two guests who joined the Google Hangout from the United States, Jeff Grossman and Gordon Johnston from the OSIRIS-REx Program at NASA, who are eagerly learning from Rosetta in sight of their coming asteroid study and sample return mission, planned to launch in a couple of years.

But for the moment, all eyes are turned on Philae: both on the short term, waiting to get the signal back from the lander tonight, and on the longer term. Even if its current location does not offer optimal exposure to sunlight to fully recharge the secondary batteries, it is possible that, as the comet approaches to the Sun, the illumination will increase and Philae will once more wake up and talk to us.